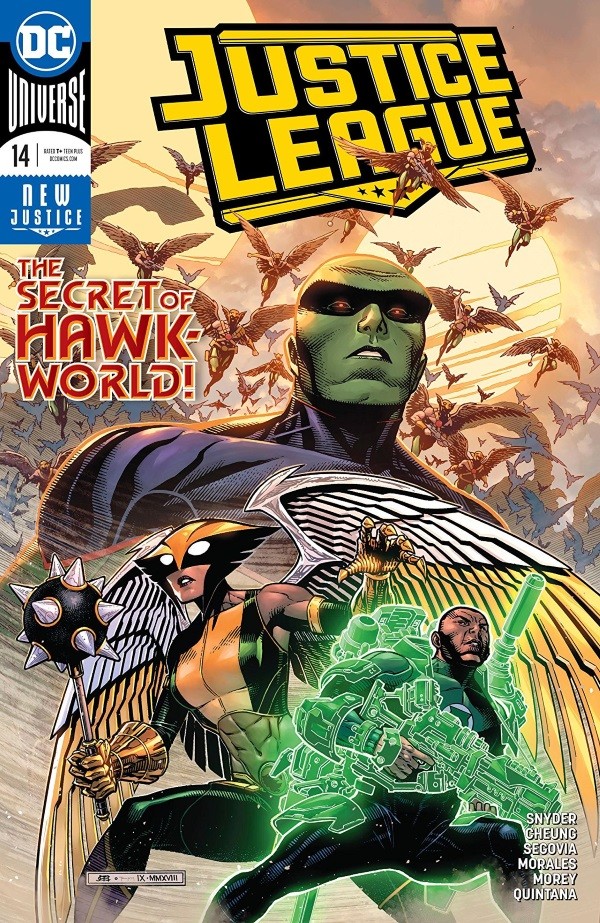 SYNOPSIS: Let’s take a trip to “Hawkworld” in part one of a new Totality-related storyline! Martian Manhunter, John Stewart and Hawkgirl avoided “Drowned Earth” with a detour to Thanagar-Prime: J’onn looks to tap into the ancient Martian mental database, GL struggles while practicing his new UV powers, and Kendra searches for answers about her connection to the Totality.

Welp, safe to say there is a lot going on in the DC Universe. In fact, there’s so much going on it’s a little difficult to keep it all straight

Unlike the previous issue of the series, Justice League #14 focuses on members of the actual team! That’s right, we’re back to business with Batman, Superman, Wonder Woman, Green Lantern, Martian Manhunter, and Hawkgirl. I just hope you’ve been reading everything that’s been going on with these characters in every other book they’ve appeared in since the last time they were in Justice League #12 because this title is not here to make sure you are caught up to speed.

The issue opens up with a brief couple of pages where Batman is tapping into Starman’s mind with Jarro helping to create a psychic link between the two. Just as Bruce is about to get to the information he’s looking for, Wonder Woman and Superman race and break the connection, fearing that it would kill Batman and potentially unleash enough power from Starman’s mind to rip a hole in the universe.

The majority of the issue focuses on Hawkgirl, Martian Manhunter, and Green Lantern’s visit to Thanagar Prime. The team arrives looking for information both from the Martian Keep and also related to a strange glowing map that has been radiating from Hawkgirl’s wings. They are not given the warmest of welcomes as the planet is untrusting of outsiders and on the ready to defend itself from any potential attacks. They are however greeted and named guests of the planet by Shayera Hol, Empress of the Thanagar Prime.

Sadly, Shayera informs the Justice League that the Martian Keep has died and that she is unable to decipher the map on Hawkgirl’s wings. The team prepares to leave the next day, following their attendance at a great Thangarian Festival. Something seems off though. As Hawkgirl and Shayera Hol should be connected to one another through some sort of reincarnation or shared life experiences but the normal laws of this universe don’t seem to be functioning as they should. Are there secrets that are being kept from the heroes and what else could Shayera be hiding? The reveal is pretty great, but I’m not going to spoil it here.

Back on Earth, it seems like Clark and Diana’s fears are coming true and Starman’s powers are ramping up at an unsustainable rate and about to destroy the entire planet! We’ll have to wait until Justice League #15 to find out…

Scott Snyder is doing a fine job crafting an intricate and multi-layered tale that really captures all the crazy multiverse, time travel, reality altering, head-scratching, confusing elements of the DC Universe. James Tynion IV has been a solid lieutenant, for the arc in general and handling the writing duties on this issue. It’s a fun read and delivers some solid character moments and interactions. The artwork by Jim Cheung and Stephen Segovia is high quality and works so much better together than previous issues where the art duties have been split.

The problem with this title, and the way this long game of a storyline is being unfolded, is that it’s simply becoming too difficult to track what is going on. Justice League is a bi-monthly comic book and one would think that it would make it easier to follow. Justice League is still more than worth reading, but be prepared to be confused or to need to do some internet research if you aren’t reading nearly every other title even tangentially connected to this series or these characters.

Remember when all the Superman titles in the Nineties had these little triangles that told you the order in which the stories were being told from issue to issue? Oh man, those would be so nice to bring back. Someone tell Snyder. It’d be a big help. – Garret Grev

GRADE: B- (It’s good but the frustrations are real.)