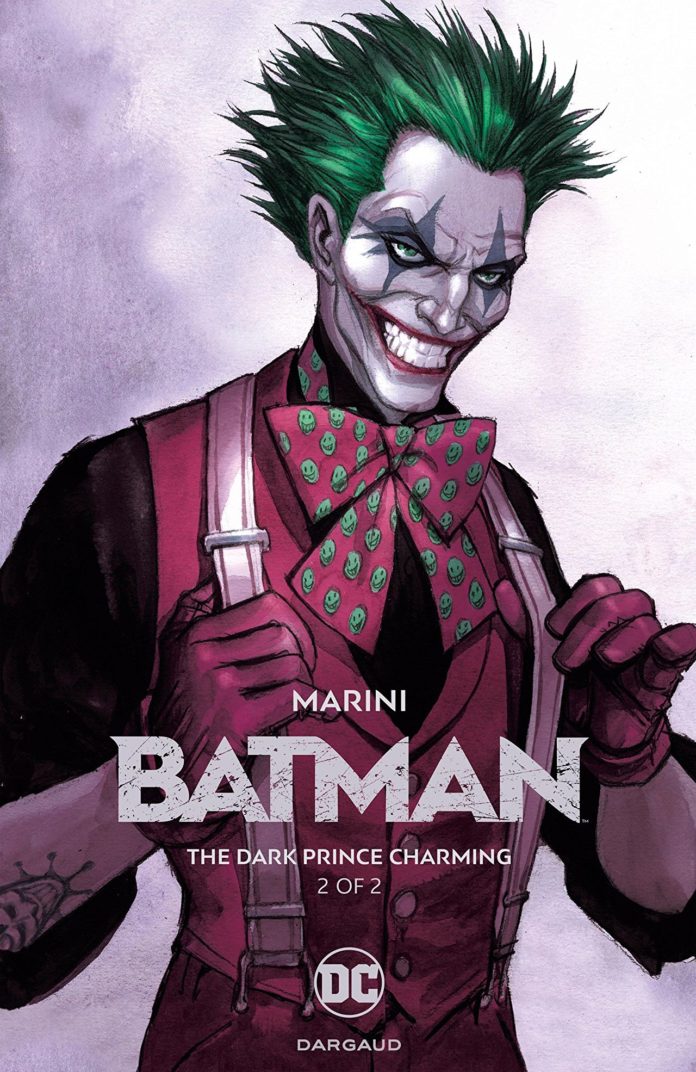 SYNOPSIS: Concluding the story begun in the critically acclaimed and sold-out first volume by European superstar artist Enrico Marini (Scorpion, Eagles of Rome). Batman hunts down The Joker in a desperate attempt to rescue the young girl who may or may not be the daughter of Bruce Wayne. But The Joker’s prisoner may be more formidable in her own right than he anticipated. And what role might Catwoman have to play in the final showdown between two sworn enemies?

Batman: The Dark Prince Charming #1 snuck up on all of us back in November. Released in an over-sized, $13 hardcover format, the book is written by Italian artist Enrico Marini. In a nutshell, a woman named Mariah shows up at Wayne Manor and swears to Bruce that her 9-year-old daughter is also his. Not a stranger to these sort of accusations, Bruce shakes this off, sending them on their way. As every personal matter goes these days, it’s quickly picked up on television and everyone in Gotham knows. Meanwhile the Joker, who has failed in giving Harley the perfect birthday present, catches the story and decides this girl is the solution to his problem. In a violent crash, he kidnaps the girl and leaves the mother for dead. Batman later shows up at the scene, and in detective mode scoops up a sample of the girl’s blood and tests the DNA back at the Batcave. The results are surprising to him, but unknown to us.

Now, 7 months later, Marini concludes his first trip into Gotham with Book #2. We pick up with a flashback that supports Mariah’s story. Bruce met this woman, in a bar, 9 years ago. What happened between the two is left to our imaginations, which may come back to bite us later on. In present day, Batman is tracking down the Joker, who he knows has the little girl (Alina) locked up in a cellar. Enter a $50 million necklace to set off a series of unfortunate events. Joker meets up with Bruce, shows him video of Alina, and demands Gotham’s favorite Prince buy the diamond in exchange for the girl. At the auction, enter Selina Kyle, aka Catwoman, who also wants the diamond and throws a wrench into the plans. By the book’s end, everything becomes clear. Just not in the way you’d expect.

I originally, and mistakenly, thought this was going to be a nice out-of-continuity Batman story that was simple, digestible and fun. I was wrong. B:TDPC is complex, dark, emotional and gorgeous. Re-read my summaries above (go ahead, I’ll wait) and that doesn’t even cover half of what is in this book. Marini spun a hell of a web and made sure everything connected. After reading Book #2, I went back to Book #1 and read it in a whole new way. That’s not a feat many authors can accomplish successfully. But Marini did. He’s an illusionist for sure, making you see what he wants you to see, while there’s a whole other story going on that you’re missing.

Speaking of seeing, his style is incredible. I’ve really enjoyed following his twitter account, as he’s been gracious enough to share the evolution of this story, and giving us fans glimpses behind the curtain. He includes just the right number of city shots, and they’re breathtaking. But he also knows this is a personal story, and doesn’t skimp out on the small character beats…and nails every single one of them. Throughout the book, we get great panels of: Catwoman jumping off a rooftop, Batman spreading his wings, a distant Wayne Manor, a gorgeous Christmas tree, and more. He balances darkness and light in a delicate manner, complimenting the emotional beats throughout the book. Again, not every artist can do this but Marini is a pro. Did I mention his Batman design is badass?!

I am smitten over this book. It’s really, really good. Aside from its wonderful art, there is A LOT going on that just reels you in. On top of that, what you read back in November has a whole different meaning after reading this second book. And the title, Dark Prince Charming? It’s relevant, but you won’t guess how.

Marini hasn’t visited Gotham before, but I say give him the keys to the city. He’s welcome back any time.

Hey Batman Fans, Are You Going to Give BEWARE THE BATMAN...