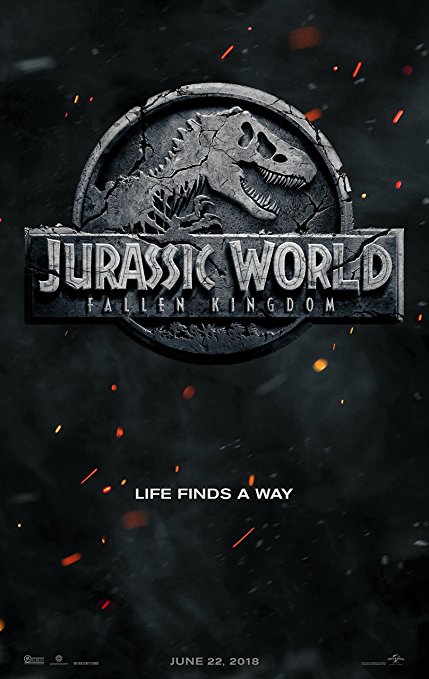 SYNOPSIS: It’s been three years since theme park and luxury resort Jurassic World was destroyed by dinosaurs out of containment. Isla Nublar now sits abandoned by humans while the surviving dinosaurs fend for themselves in the jungles. When the island’s dormant volcano begins roaring to life, Owen (Chris Pratt) and Claire (Bryce Dallas Howard) mount a campaign to rescue the remaining dinosaurs from this extinction-level event. Owen is driven to find Blue, his lead raptor who’s still missing in the wild, and Claire has grown a respect for these creatures she now makes her mission. Arriving on the unstable island as lava begins raining down, their expedition uncovers a conspiracy that could return our entire planet to a perilous order not seen since prehistoric times.

Despite the best efforts of director J. A. Bayona, the weaknesses of the first film creep into the sequel. I’ll give him credit for guts, though, as he sets up a third sequel even before he knows how his one will be received. Chris Pratt is an enormously appealing actor, but his performance in this one feels a bit less enthusiastic than before. And he has more chemistry with the animatronic dinosaur Blue than he does with co-star Bryce Dallas Howard.

Pratt reprises his role as velociraptor trainer Owen Grady, and Howard appears again as former operations manager now turned dinosaur activist Claire Dearing. They were not a convincing couple in Jurassic World, nor are they in this film. At the beginning of the film, they have appropriately broken up, but fate will place them in each other’s orbit once again.

At the end of the first film, Jurassic World lay in ruins as it still does on Isla Nublar, with the remaining dinosaurs running free. A controversy has arisen because a dormant volcano on the island has reawakened and will likely explode and destroy the island. Dr. Ian Malcom (Jeff Goldblum) testifies before a Congressional committee that nature should be allowed to take its course to correct the mistake John Hammond made in resurrecting extinct species in the first place. They agree that the dinosaurs should not be rescued.

Claire Dearing now heads the Dinosaur Protection Group which strongly disagrees, and she’s still looking for a way to save them. She gets an invitation to visit the estate of Hammond’s former partner, billionaire Benjamin Lockwood (James Cromwell), who has created a safe haven for the dinosaurs in Northern California where they can live without human interference.

He elicits Claire’s help in making this happen and turns her over to the manager of his considerable financial resources, Eli Mills (Rafe Spall). Mills explains that they’ll need to go to Isla Nublar, even though it’s probably on the verge of blowing up, and he’ll need her to convince Owen Grady to join them in order to capture the velociraptor Blue.

Also along for the ride are technical specialist Franklin Webb (Justice Smith) and paleo-veterinarian Zia Rodriguez (Daniella Pineda). This narrative set-up defies logic because who, in their right mind, would go anywhere near an erupting volcano, especially one on an isolated island? Not only that, Zia informs everyone that even though she’s a paleo-veterinarian, she’s never actually seen a dinosaur. So, my question is how can one be a paleo-vet in that case? Did she train on pretend dinos? Science fiction needs to be at least a little bit believable.

When they arrive, preparations are already in high gear, and they’re just waiting on Owen to locate Blue. The head of the team of mercenaries hired to accomplish the transfer is Ken Wheatley (Ted Levine). Levine said in interviews that his goal was to create a totally unlikeable character, and he succeeded quite well. The real villain, though, is someone else entirely as you’ll discover. I’ll just say that Benjamin Lockwood must be the most naïve billionaire ever.

When Owen and Clare discover that everything isn’t exactly kosher, they and Franklin and Zia become targets. After dealing with a number of truly dire situations, they finally arrive back at Lockwood’s estate where more actions that strain credulity occur. In order not to reveal what little suspense exists in the film, I’ll leave you to discover the unfolding of the story.

So, what’s good about the film? There are many more dinosaurs which the preview audience seemed to enjoy. They’re a combination of animatronics and CGI, so they look convincingly alive – and menacing! Justice Smith is a bright spot in the cast, as is Isabella Sermon. Smith provides humor, and sometimes, reality checks. What good is a dinosaur film without a child in peril? Isabella gives Maisie believability and child-like courage that falters when it should. The special effects are adequate, if not spectacular, with the exception of a hair-raising encounter for Maisie, Owen, and Claire with a genetically-engineered dinosaur at Lockwood’s mansion. Timed to be at night in the rain, it’s very gothic and visually striking.

I found the beginning to Jurassic World: Fallen Kingdom to be annoyingly slow, and the believability of the story significantly deficient. – Jo Hyde