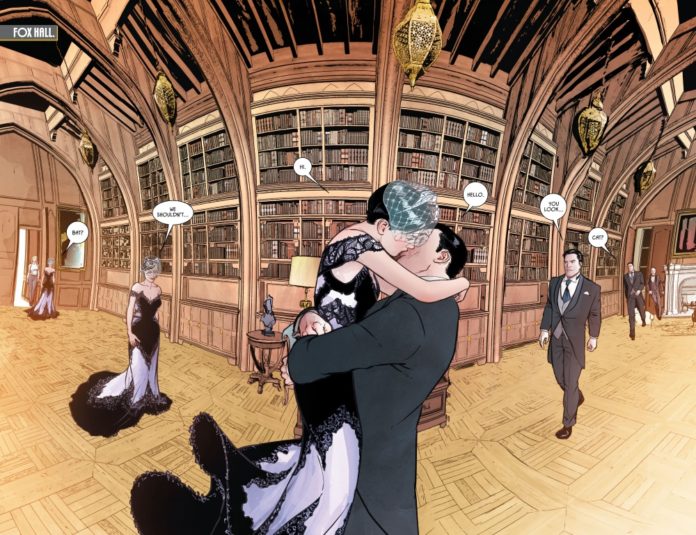 EDITOR’S NOTE: This following review contains what some may deem as spoilers.  FYI.

SYNOPSIS: It’s the wedding you never thought you’d see! The Batrimony is real as Bruce Wayne and Selina Kyle are set to tie the knot in a can’t-miss, extra-length milestone issue that will reshape Gotham City. All their friends (and a few enemies?) will be party to a comic book coupling for the ages.

Superstar scribe Tom King officiates the sure-to-be-offbeat nuptials, joined by an all-star lineup of guest classic Bat-artists doffing their hats to the lucky couple in a series of pre-wedding flashback scenes sure to set the romantic mood.

That’s a certain character’s word that’ll be heard around the world in the wake of Tom King’s BATMAN #50, and it’s also the word I uttered as the issue ended. For a book whose cover cordially invites us to “The Wedding” of Batman and Catwoman, well…

And that’s not my saying that a wedding doesn’t occur, even though everyone who’s read my reviews of the 26 issues since Bruce Wayne’s proposal to Selina Kyle knows how much I want it to.

Maybe it DOES happen, but in a way that doesn’t ring as beautifully true as the globe-trotting, time-hopping adventures that brought them — and all of us — to it.

Or maybe it DOESN’T happen because of a reason we’ve seen before, no matter how handsomely or heartbreakingly it might be written.

The writing for either outcome has been on the wall for some time, depending on how you’d like to interpret the signs. Take, for example, Booster Gold’s innocent but honest musing to Bruce and Selina at the end of issue #47, when he confesses to the godless slaughter wrought in another timeline that resulted from Booster’s ill-advised attempt to give Bruce a whiz-bang wedding gift:

“You were happy, and the world wasn’t.”

Jett and I have exchanged many emails about this — he read it as an obvious foreshadowing of zero nuptials; I took it as a challenge that meant it had to happen just so we could see them deal with it.

And how could it not happen? Issue #49’s final three words are, “NEXT: THE WEDDING!” It’s been aggressively advertised as such, and sold to comics shops and fans as such, with DC Comics putting King on late-night TV to spread the word. Hell, its title is even “The Wedding of Batman & Catwoman.”

But when CATWOMAN #1 was announced for release on the same day as BATMAN #50, I wondered what it meant. Was it a sign that the wedding was doomed, because clearly she’d need a new venue for her newly single escapades? I didn’t think so. I thought, “Okay, this will be an exploration of what happens to Selina’s reputation when Gotham City’s good guys, bad guys, and worse guys find out she’s married to Batman. It’ll be something we’ve never seen.”

And what would it mean for him? What’s more interesting — seeing Batman retreat into himself as he’s done so many times in the aftermath of a major loss, or watching his figuring out being Batman in happiness as effectively as he did in misery? Or maybe even more effectively? What would that look like? What would it be?

As I’ve said before, the biggest plot twist for me at this point would have been that they actually did get married! How could the man who wrote BATMAN ANNUAL #2 not go through with it… or did he write BATMAN ANNUAL #2 as a preemptive apology for what he’d do when it actually came down to it?

All my wonders and worries are answered here, and I’m flabbergasted by the result. King’s words are lovingly crafted, with many of them arriving as letters that each of the engaged has written to the other. (Letterer Clayton Cowles goes above and beyond on this one.) The primary art by Mikel Janin and colorist June Chung is beyond reproach as always l in both action and emotion, with more than 30 other contributors providing knockout backdrops for the pages bearing Bat/Cat correspondence.

And yet, wedding or not, I just don’t buy this issue’s conflict. Is Bruce Wayne so broken, and Batman so weak, that happiness will most certainly defeat him? Does Selina really believe that the man who battled his way through 37 years of another dimension’s demon hordes (alongside Wonder Woman in issues #39 and #40) to get back to her side, and whose life she bravely saved from the savage sword of Talia Al Ghul, is incapable of being a hero if he’s in love with her? Have their recent adventures and revelations changed them for the better, or are they always doomed to the same old same-old star-crossing?

Wedding or not, I find this issue’s answers to those questions too easy and deeply frustrating, and its culmination in a confusing coda doesn’t do itself any favors. After DC betrayed retailers and readers by spoiling the ending in The New York Times several days early, King took to Twitter to say that we’re only at the halfway point of a giant celebration of Bat/Cat love. So if there wasn’t a wedding in this issue, does it mean we’ll get one in issue #100? Or if this issue does have a wedding, are we due for 50 more chapters destined for divorce? The path to either outcome seems punishing.

Ultimately, neither spoilers nor social media musings will be remembered. The book will stand forever on its own merits, which are admittedly many. I did, and do, believe that Tom King is one of the best Batman writers we’ve ever been blessed with, and I trust that this isn’t the end — especially given how he’s written families in MISTER MIRACLE and Marvel’s VISION.  I retain great faith in King’s ability to surprise and inspire me, but BATMAN #50 is the first issue of his titanic run that hasn’t left me clamoring for what’s next. — John Bierly

BATMAN: BEYOND THE WHITE KNIGHT #5 Review