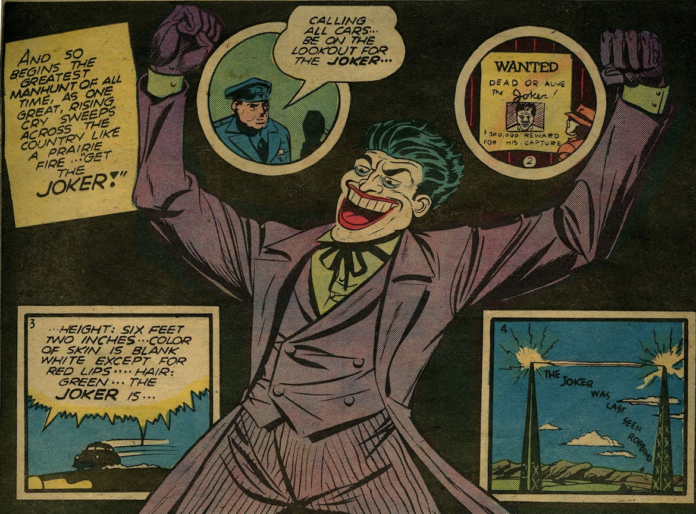 One of the touchstones of The Joker’s interpretation in comics is the first dozen stories featuring the Joker that follow his introduction as a cold blooded killer and his transformation into a clever prankster that would bedevil Batman over the years without falling prey to the morality police. There are a dozen stories that make up this initial introduction, so 4 parts to go after this. 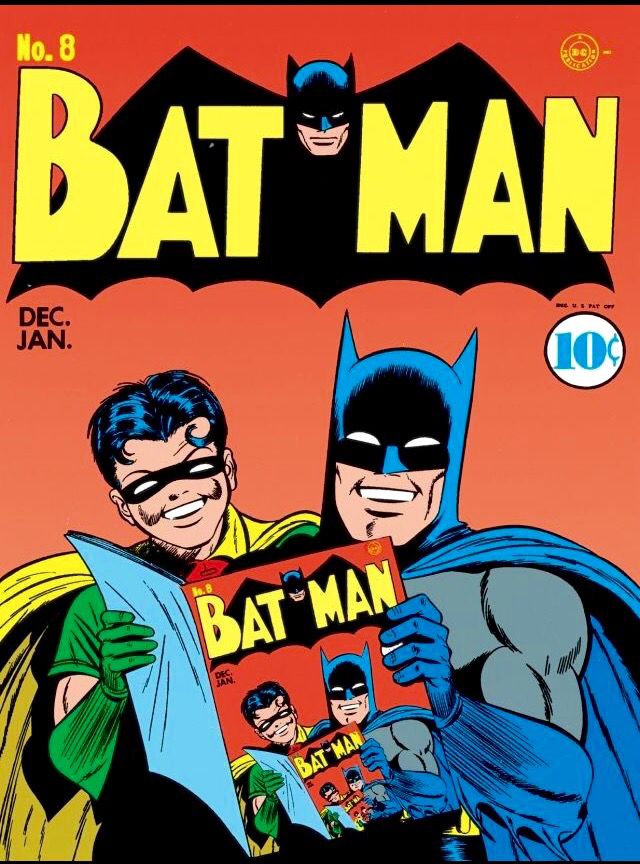 The Story/Comic Book: “The Cross-Country Crimes” from BATMAN #8

The Return: No explanation, presumably The Joker survived his fall into a chasm somehow.

The Plot: The Joker runs from state to state committing crimes and leaving the name of the next state as a clue.

Body Count: Five (confirmed), two by poisoned cigar and at least three in a bus crash, although potentially many more

Other Mayhem: The Joker shoots the director of the FBI with a sniper rifle, cold-cocks a radio announcer, robs a theater performance, knocks Robin over the head with a machine gun and takes him hostage, fires a machine gun at Batman, gasses Robin with knockout gas, fights with Batman on a suspended tram car, gives Batman, Robin, and a group of police officers a nasty electrical shock with a rigged up dummy, gives Robin a good kick to the jaw, and fights with Batman in traffic. Plus a bonus on the opening splash page has a gunned down police officer, although that’s purely symbolic.

The Outthink: Batman solves The Joker’s pattern and jumps ahead laying a trap.

The Comeuppance: Batman knocks out The Joker in a fight. Next stop Alcatraz where The Joker vows his escape.

It’s impossible for me to review this one totally objectively. This was the first Joker story I can remember reading in the Treasury-sized Limited Collector’s Edition #37 and it’s the basis for my primal impression of the character. This is a story that my pre-teen self devoured over and over.

Originally published in the winter of 1941, the story opens with a radio message for Batman and Robin from the head of the FBI (“G. Henry Mover”) and the President thanking them for their services and requesting that they come to Washington D.C. Probably understandable at the time that with the country on the brink of war, the idea of costumed vigilantes operating outside of government sanction was running against popular sentiment. So, for the first time ever, Batman and Robin have a parade held in their honor. Which is interrupted with a bullet fired from a faraway rooftop from The Joker which strikes the FBI chief by mistake, albeit non-fatally. The scene is such that it somewhat foretells Lee Harvey Oswald and JFK in Texas in 1963, over 20 years away. So begins a nation-wide manhunt for The Joker with one of the great splash pages from the Golden Age with a larger than life Joker apparently delighting in the attention he’s acquired.

As usual, The Joker doesn’t want to merely be the object of discussion, he wants to control the discussion. He takes over a radio station by knocking out the radio announcer and challenges the police and Batman to catch him. And he leaves the first clue to his new theme based crime spree. A Joker card with a taunt and “New Jersey” on it. And so Batman and Robin head off to New Jersey to track down the Joker who is eyeing a theater production that’s going to use actual jewels on the actors.

In the first wild leap of coincidence, Bruce Wayne and Dick Grayson decide to relax by watching this production after a futile day of trying to hunt down The Joker. Now most Batman stories rely on some coincidence, the latest issue of DETECTIVE COMICS, #841, for instance starts out with a similar one, but the idea that they’re going to take a break from the case strikes me as un-Batman-like. In any event, the reader isn’t given any time to ponder it as suddenly there’s an actor on stage that doesn’t knows his lines and who reveals himself to be The Joker. Batman and Robin then literally spring into action, but The Joker’s first move once they hit the stage is to knock Robin over the head and take him hostage. And, The Joker uses Robin to make his escape and leaves his second calling card “Ohio”.

And it’s in Ohio where one of The Joker’s deadliest rampages of his Golden Age career takes place. There The Joker seeks out two “old cronies” who say they have a job worth millions. A specially chartered bus, complete with at least one police guard, is bringing a group of jewelers along with their displays to a convention and the gangsters are looking for a way to knock that bus over. Of course, The Joker has a plan and he rewards his cronies with a pair of cigars. Cigars poisoned with laughing gas and Joker venom which brings them to a rather grisly fate. The first cigar gag that The Joker ever pulled. It turns out that, as usual, The Joker doesn’t like to share, especially jewels.

We then cut to The Joker altering the road center line to lead the bus over a cliff. And it successfully does killing everyone on board. In the second leap of coincidence, Batman and Robin are in the area and hear the crash. And arrive in time to see The Joker picking through the remains like a hyena. A fairly strong action sequence begins with The Joker gassing Robin and then fleeing into a nearby suspended tram car after Batman disarms him. Batman ensues and you end up with The Joker and Batman fighting on the edge of a suspended tram car in front of a gigantic full moon. The Joker temporarily gains the upper hand, he’s no longer presented as Batman’s equal in a fight but still as someone who can hold his own and get in a shot or two, and leaves Batman hanging on the edge of the tram car. And then, to The Joker’s surprise, the trams reverse course as Robin has recovered and reached the tram controls. The Joker has one last surprise though as he leaps to a passing tram car and reaches the next station to escape. The Dynamic Duo pick up the trail only to find The Joker’s next clue “Kansas”. All in all a well done sequence.

Next stop Kansas. And then a report that The Joker was last seen entering a house. Batman, Robin and the police charge in on a seated Joker only to be the victims of a joke, it’s a dummy rigged to deliver a powerful electrical shock to anyone that touches it. And they find the next clue “Delaware”.

At this point, Bill Finger follows through on the story template of the theme based crime solution that will become the formula for many future comics. Instead of blindly running to Delaware, Batman jumps ahead of The Joker by finding the pattern in the seemingly random collection of States:

The Joker is spelling out his name across the USA. And the only thing left to complete it will be an “R”. And the only State that begins with an R is Rhode Island.

And a trap is laid. The Joker reads a newspaper article about the traveling I. Namtab (Batman turns one of The Joker’s tricks against him by spelling his name backwards) visiting Providence with a fabulous diamond, The Joker’s favorite thing to steal. And The Joker pays a visit to that hotel room, only to find Batman and Robin waiting for him. After a brief chase, The Joker ends up behind bars at Alcatraz vowing to return soon.

Despite a few huge coincidences to ensure that there’s action in the story, this is pretty clearly a classic tale. You get to see many facets of The Joker, murderous, vain, attention seeking, humorous, dark, practical joke playing, and clever (even a can of paint can be turned to deadly results). Even common crimes have a deeper, grander purpose, The Joker spelling his name across the whole country. The wheels within wheels planning and clues will become a staple of Batman stories, for good reason. The action is exciting and there’s no comparison in the art between this story and The Joker’s first appearance. As I said previously, this is the story the formed the strongest first impression of The Joker for me and I think it’s stood the test of time fine, although it’s obviously written for a younger audience.

In many ways this was the murderous peak of the Golden Age Joker. He’d be back soon, but it would have been tough to top this outing and, for the most part, Batman’s creators didn’t try. Perhaps wisely avoiding a spiral of upping oneself that would have left the character unusable. Instead, it was scaled back to the level of his practical joke-scaled crimes.

NEXT: “Case of the Costumed Killers”