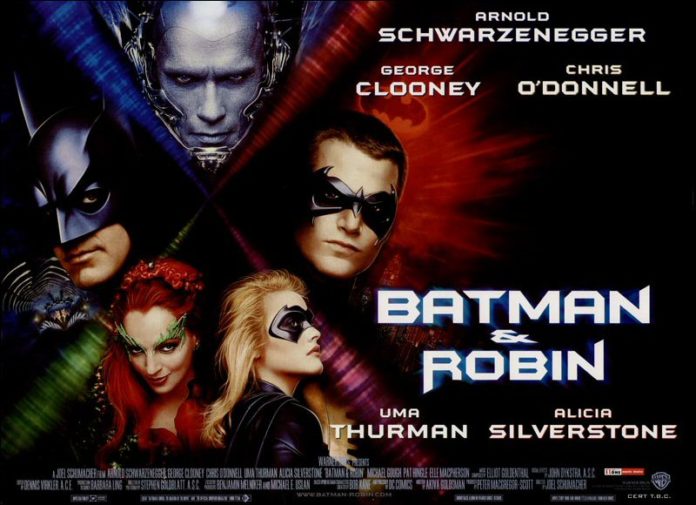 MAY: Writer Paul Dini gives Mr. Freeze his first comic book origin story (which was very similar to the character’s origin and backstory in BATMAN: THE ANIMATED SERIES) in BATMAN: MR. FREEZE.

BATMAN & ROBIN was met with horrible reviews from critics and a very negative response by Batman fans as well as the general audience. The film went on to make $107,325,195 domestically – the least amount of the four Tim Burton/Joel Schumacher Batman films for Warner Bros. (though it did actually make a profit).

As a result of B&R’s poor performance on all levels, the already in the works next Batman film – BATMAN UNCHAINED (though everyone wrongly called it BATMAN TRIUMPHANT for years) – was canned. It would be eight years before Batman would hit the big screen again.

SEPTEMBER: Bruce Timm and his team revamped BATMAN: THE ANIMATED SERIES for a new show for The WB network titled, THE NEW BATMAN ADVENTURES.

BATMAN & ROBIN…to this day, the ONLY Batman movie that I walked out of the theater on (though I wanted to very much with BATMAN RETURNS, but didn’t). Now, I did go back the following day (the Saturday after its release on June 20, 1997) and see it in its entirety from start to finish. The word “disappointed” does not properly describe how I felt upon seeing this film. I recall thinking, “This is going to kill Batman movies.”

And it damn near did.

It would be a year before I would start the BATMAN ON FILM website, but the seeds had been planted and I was on a mission.

What did you think of “Batman in 1997” and what are your memories? Post your thoughts in the comments section below! – Bill “Jett’ Ramey