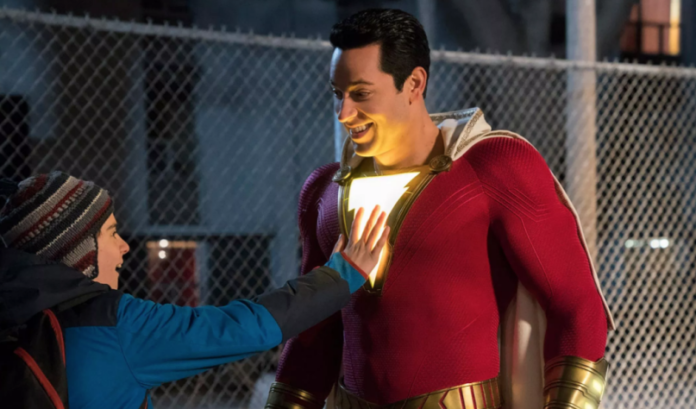 As I acknowledged in the title, director David Sandberg’s SHAZAM! starring Zachary Levi does indeed exit in the DC on film universe (I refuse to call it the DCEU because that was a BS, made-up term).  Thus, Superman, Batman, Wonder Woman, Green Lantern, The Flash, Aquaman, Cyborg and all the other DC characters live in the same world as Billy Batson and his grown-up, super-powered alter-ego (Captain Marvel, dammit).

Therefore, if you love the shared universe on film concept, and are a stickler for continuity, you’re likely happy as heck (I’ll go all PG in this op-ed to stay in spirit with this movie).

However, I’d argue that having Superman, Batman, Wonder Woman, Green Lantern, The Flash, Aquaman, Cyborg and all the other DC characters exist as they do in our world — as fictional characters — would’ve made SHAZAM! even more unique and special.

Why?  When those aforementioned DC characters are “real,” it makes becoming a superhero in that world possible.  As a result, the fantasy and magic of a story about a kid who actually becomes something that doesn’t — and shouldn’t — exist is lessened.

In the world in which Billy Batson lives, it is indeed possible for a normal human being to become a super-powered hero (or villain, I assume).  One can have a lab accident involving chemicals and a bolt of lightening and get super-speed.  A person can be given a power ring by an alien, space cop and can create/do anything simply by syncing the ring and their mind.  Also, someone can have body parts replaced by bionic limbs and be turned into a cyborg “superman.”  Or, riffing off of Marvel, if you’re bitten by a radioactive spider, you can acquire all the traits of an arachnid.

If you’re reading this, you’re were probably just like me as a kid.  You bought comics and admired those superheroes.  Like me, you might’ve even had your mom, grandmother, or aunt make you costumes.  While you pretended to be Superman, Batman, Wonder Woman, Green Lantern, The Flash, Aquaman, Cyborg or any other DC (or Marvel, for that matter) character, you still knew that “pretending” was as far as it was going to go.  As much as the 4, 5, or 6 year old version of us fantasized about it, ultimately we knew it was impossible.

However, if you inhabit the same world as Billy Batson, it’s not out of the realm of possibility to become a superhero with fantastic powers.  And it should be.  When it can be, it’s just not as special or magical or awesome.

SHAZAM! being set in the DC on film universe is not a deal-breaker for me at all.  I’m still very much looking forward to this movie and watching that first trailer upped my excitement for it.  Yet, I wish they had gone a different route in terms of how Superman, Batman, Wonder Woman, Green Lantern, The Flash, Aquaman, Cyborg and all the other DC characters exist.

If the DC character’s were portrayed as fictional in SHAZAM! as they are in our world, then Billy Batson is one of us.  He’s you and me when we were kids.  But alas, he’s not; he’s now no different than Hal Jordan.

Henry Cavill’s Superman being able to show up and shake Zachary Levi’s Shazam/Captain Marvel hand may be cool, but it would be special if he couldn’t. – Bill “Jett” Ramey