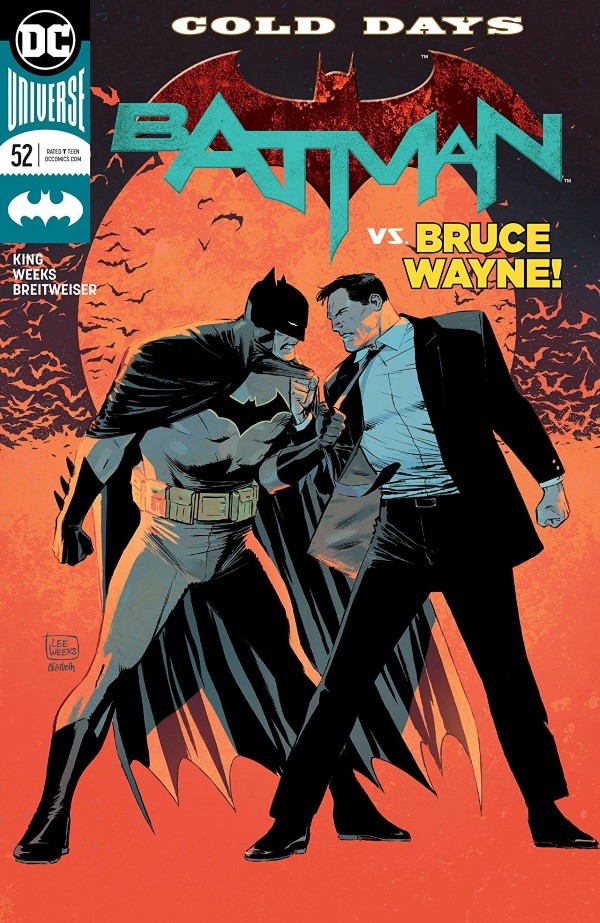 SYNOPSIS: “COLD DAYS” continues! The jury in the Mr. Freeze trial is hopelessly deadlocked because one man won’t vote guilty—and that man is Bruce Wayne. Freeze’s defense is that Batman used excessive force, making his arrest illegal, and Bruce is the one man who actually knows for sure what went down between Batman and his ice-cold nemesis. And if Bruce is right, that means everything he’s devoted himself to as the Caped Crusader is a lie; he is hurting more than helping. With Dick Grayson putting the Batsuit back on to keep Gotham City safe while Bruce is sequestered, could this be the out Bruce needs to discard the cape and cowl forever?

After kicking Mr. Freeze’s ice and straight-up murdering a urinal in the men’s room at Gotham South Court, Bruce Wayne seems a bit more composed in issue #52 than he was when we saw him last. And he’d better be! Because even though his fellow 11 jurors have already agreed on his frigid foe’s fate, Bruce is more interested in putting someone else on trial…

Overwhelming evidence puts the deaths of three women at Freeze’s feet, and a confession coaxed by the brains (and brawn) of none other than Batman himself seals the deal. So when Bruce Wayne is the only juror who votes “not guilty,” the reactions aren’t exactly chipper. These people have kids! And families! And jobs! Not everyone can afford an extended stay on paltry jury pay, so why is the rich guy gumming up the gears of justice? After all, isn’t his buddy Batman super-competent and hyper-infallible? Eleven hearts believe this. The twelfth knows better.

Despite detours to Freeze’s and Batman’s paths that converged for the big altercation that brought this trial about, the action happens mostly in the courtroom. Artist Lee Weeks (pencils and inks) keeps the jury scenes taut, giving unique appearances and personalities to the other jurors — especially those with the most speaking parts. Colorist Elizabeth Breitweiser delivers shades that beautifully bolster Weeks’s expressive faces, and together they make the jury room feel focused and claustrophobic without sacrificing an iota of detail, especially in the city scenes we see in the flashbacks. Their Mr. Freeze take is one of the all-time greats.

I love this setup, because it reminds me of my all-time favorite Batman-on-film scene — Batman going undercover in broad daylight as Bruce Wayne in a Lamborghini to rescue sniveling Coleman Reese in THE DARK KNIGHT. But writer Tom King’s wrinkle is that this time Batman is trying to undo a mistake he’s (maybe?) made, and watching Wayne in this kind of arena is fascinating. His very presence on this jury is a lie… but you won’t believe how honest he gets as the pages progress. Maybe this is making sure the right thing happens. Maybe it’s making sure an innocent (this time) man doesn’t locked up. Maybe it’s paving the way for the true killer to be caught.

Review – BATMAN: PRELUDE TO THE WEDDING: BATGIRL VS. THE RIDDLER