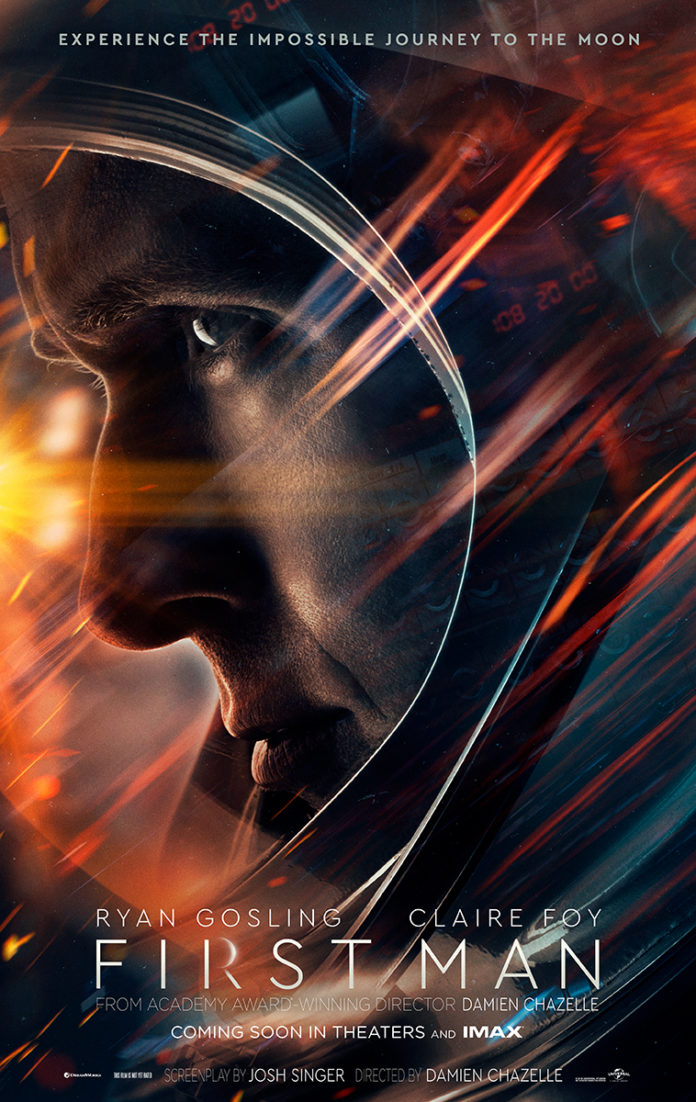 First Man presented a dilemma for me.

Anyone my age will be able to tell you where they were when the moon landing took place. Granted, the television image of the day was black and white and grainy, but that didn’t lessen its effect. It was the most exciting thing that had happened in the history of the US space program, and it brought a momentary island of joy and delight into the otherwise turbulent and troubled political climate of 1969.

Therefore, I was surprised that director Damien Chazelle went for a melancholy overall tone for the film. I guess I was expecting a more rousing, inspirational mood as in my other two favorite astronaut films, The Right Stuff (1983) and Apollo 13 (1995). First Man affects its audience in a more personal, intimate way.

The Space Race was a real thing from its inception in 1957 when the USSR launched the satellite Sputnik into space. The intense rivalry between the US and them was a powerful driver of the national obsession to achieve firsts in space exploration. The men who entered NASA’s astronaut program were of a distinctive mettle than the average guy. Many had been test pilots, facing death regularly as they pushed new aeronautical technology to its limits.

Neil Armstrong was one of those men.

Ryan Gosling, who portrays Armstrong in the film, gives him a stoical countenance and an engineer’s need for order and logic. Armstrong was, after all, an aeronautical engineer as well as a pilot. Gosling, in an excellent performance, gives us a man who is guarded in his emotions and embarrassed by fame. I hadn’t previously known that he had a daughter who succumbed to brain cancer when she was only two. Gosling makes Neil’s grief palpable even as he tries to hide it.

Equally impressive is Claire Foy’s performance as Neil’s wife Janet. Her American accent is flawless, and you’d never guess that she played Queen Elizabeth in The Crown. In character as Janet, Foy wears little makeup and dresses plainly. She’s not “just” a housewife, though. She takes care of all business related to the home, care of their two young sons, and any social interactions the couple has. She’s strong and secure enough to confront her husband when he’s insensitive or neglectful. An astronaut’s job is all-consuming, leaving the rest of the family to fend for themselves. Their home life is realistically shown under these circumstances – in other words, it was no picnic.

I was actually hoping the Apollo I fire that killed astronauts Gus Grissom, Ed White, and Roger Chaffee in 1967 would occur off-screen, but it is agonizingly depicted. The crew — poartrayed by Jason Clarke (White), Cory Michael Smith (Chaffee), and Shea Wighan (Grissom) — have the thankless job of sitting in the cramped capsule for hours during a test of the electrical systems until a spark ignites a fire. The audience sees their panic and calls for help as they realize they can’t control the fire. Fortunately, their deaths are not shown, but you hear the fatal explosion and see the smoke leaking from the sealed capsule. White was a particularly close friend of Neil Armstrong, and Jason Clarke makes him a likeable character.

Most of the other astronauts and NASA personnel have very little screen time, but Kyle Chandler as Deke Slayton, and Corey Stoll as Buzz Aldrin are prominent in the main story line as the director of space flight and Armstrong’s second in command aboard Apollo 11. The third man in the cockpit was pilot Michael Collins who remained in the capsule and did not walk on the moon’s surface. He is played by an appealing Lukas Haas who makes the most of his limited screen time.

The lunar landing feels almost anticlimactic after the intense emotions evoked during the narrative. Armstrong’s grief over his daughter’s death is a recurring motif that even permeates the scenes on the moon. Interspersed with actual footage from the event, the lunar surface was recreated in a stone quarry in Georgia for Gosling’s scenes. The stark lunar landscape and the radiant Earth in the blackness of space provide a poignant venue for Armstrong’s flashbacks to a happier time when the family lived near Edwards AFB and spent time in the California mountains before their daughter’s death. Alone in the silence of that lonely place, Armstrong symbolically lets go of his grief.

Everything about First Man is excellent, from the performances of all of the actors to the striking cinematography to the intensity of the obvious peril in undertaking the moon landing. In keeping with the somber tone of the film, Chazelle uses a lyrical, understated musical score for all scenes except the sweeping shots of the surface of the moon. Then the music soars and resonates, emphasizing the astronauts’ awe and wonderment.

At the end of the screening, the audience sat in awed silence. First Man is a transcendent film, but it broke my heart. – Jo Hyde