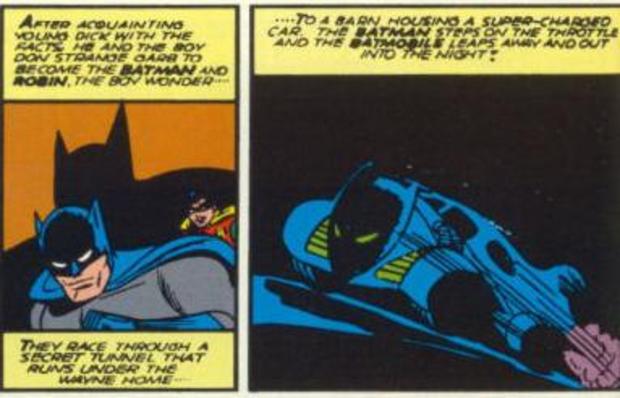 WINTER: Originally implied to be set in New York City, Batman’s “hometown” of Gotham was named for the first time in BATMAN #4. According to comic book historian and icon Jim Steranko, Bill Finger gave Gotham City its name…

“Originally I was going to call Gotham City ‘Civic City.’ Then I tried ‘Capital City,’ then ‘Coast City.’ Then I flipped through the New York City phone book and spotted the name ‘Gotham Jewelers’ and said, ‘That’s it,’ Gotham City. We didn’t call it New York because we wanted anybody in any city to identify with it. – Bill Finger

FEBRUARY: In DETECTIVE COMICS #48, Batman’s car is given the name of the “Batmobile.”

SPRING: The Batmobile is shown for the first time featuring the iconic bat-headed hood ornament in BATMAN #5. Also, Bruce Wayne gets a new girlfriend named Linda Page – a wealthy Texas oil heiress who lives in NYC and volunteers as a nurse for the elderly. The character of Linda Page would be included in Batman’s first cinematic endeavor, THE BATMAN movie serial of 1943.

FALL: Jonathan Crane – “The Scarecrow” – is introduced in WORLD’S FINEST #3 – which has yet to pair Superman and Batman in the same story.

DECEMBER: Another of Batman’s classic villains – The Penguin – is introduced in DETECTIVE COMICS #58.