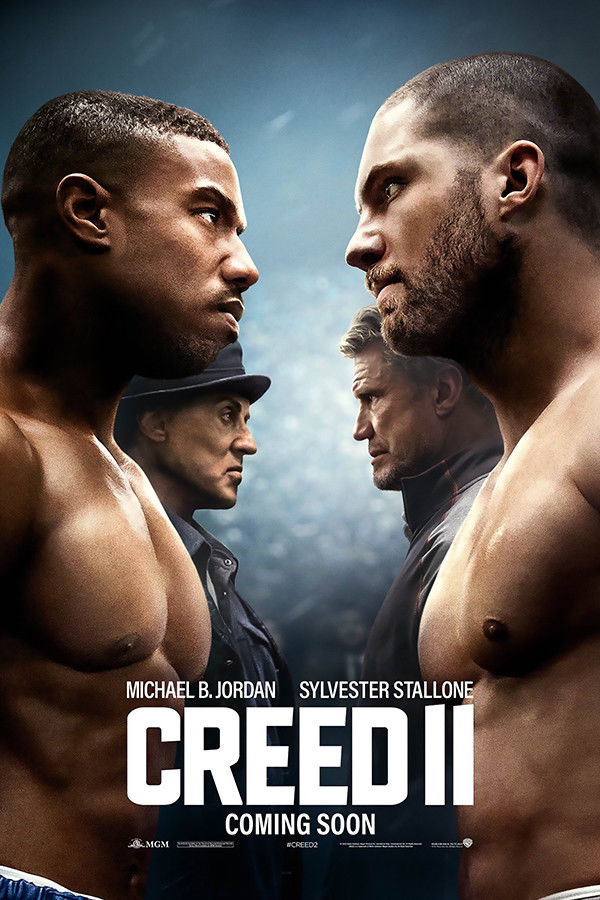 When you’re the World Champion, it’s good to remember how you got there.

And, as Rocky Balboa (Sylvester Stallone) says to Apollo Creed’s son Adonis (Michael B. Jordan), it’s good to know why you did it.

That’s about as philosophical as Creed II gets, and you wouldn’t want it any other way.

You don’t go to a film like this one to have an intellectual experience. You go to see a flawed hero embrace and triumph over those flaws. It’s the classic hero’s journey, and director Steven Caple Jr. makes it a momentous one.

That’s not to say that Creed II doesn’t have flaws of its own.

The pace is sometimes too slow given the build-up needed for the ultimate confrontation, and your heart may be in danger of being warmed just a little too much. But then, the Rocky series has always abounded with sentimentality. And the audience loved it!

You know this story. You’ve seen it many times in many different scenarios. It’s not an inventive narrative, but it’s somehow just what you want it to be.

The film’s success relies on the enormous appeal of its star, Michael B. Jordan. He’s adroitly supported by Tessa Thompson as Bianca, Phylicia Rashad as Mary Anne Creed, and, of course, Sylvester Stallone as the iconic Rocky Balboa.

I mean, you couldn’t possibly have this film without the shuffling, mumbling, but inherently wise Rocky. As the character says in reference to a long-broken streetlight in front of his row house, “It’s a little bit funny…it’s a little bit stupid.”

That pretty much sums it up.

Just in case you don’t remember Rocky IV (1985), during which Apollo Creed (Carl Weathers) is killed in the ring by Ivan Drago (Dolph Lundgren), that occurrence is frequently referred to. Ivan was a formidable and ultimately doomed, villain, and now he returns with his more formidable and brutal son, Viktor. Viktor is portrayed by Florian “Big Nasty” Munteanu. He’s a big, scary guy, and the perfect challenge for Adonis. Ivan is hungry for revenge and has groomed Viktor to vicious efficiency in the ring. He constantly reminds his son of what he lost when he was beaten by Rocky – his reputation, his fortune, and his wife Ludmilla played once more by a slightly ghoulish looking Brigitte Nielsen.

The boxing scenes are exquisitely choreographed – so much so that the preview audience reacted as if they were watching real bouts. They reacted with groans and cheers to various punches, and there was plenty of spewing of blood, sweat, and saliva as boxing glove made facial contact.

The plot is completely predictable, but when Adonis inevitably loses his mojo, the “recovery” in a remote desert area of New Mexico provides some of the film’s best scenes. And, I can’t help myself – I love the Rocky musical theme and it’s used at just the right time.

Despite its weaknesses, Creed II is a crowd pleaser. Plus, its somewhat overboard sentimentality is just the ticket for the Thanksgiving season.

It’s definitely worth the price of the ticket. You’ll have a good time. – Jo Hyde