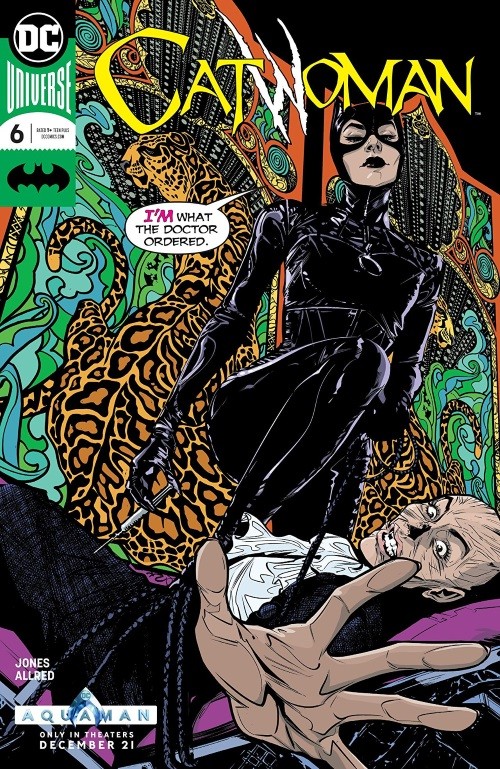 SYNOPSIS: Selina’s forced into a seriously sinister Sopranos-style sit-down! While the cops continue to hunt her for a murder she didn’t commit, Catwoman’s forced to take a meeting with secretive crime boss Mrs. Creel. Here’s the pitch: work for us or die! Selina counters with some blackmail of her own, but the offer fails to blow away Creel and her meta-crew. That leads to a breakneck chase that drives Catwoman right into the crosshairs of the local authorities.

Catwoman #6 is a breeze of a read. It moves so quickly, wrapping up this feisty feline’s first story arc in her new book.

We pick up immediately where we left off last issue. Selina gets out of the dungeon at Raina Creel’s home. Meanwhile, she’s upstairs entertaining and putting on her usual front. Miss Kyle makes her way through the party, takes out everyone who stands in her way, before finally coming face-to-face with the hideous woman.

The fallout was really quick and didn’t necessarily go down as I’d expected. But that’s okay because it all worked. Everything snapped together, and the issue wrapped up nicely. If this series were to end here, it’d be a satisfying conclusion. But it’s not the end, and I don’t know where this story is headed next.

Joelle Jones has done an excellent job with this book. The talent is known for her exceptional art, which stands out amongst the many talented artists at DC. It’s sketchy and dark, yet bright and fun. The art compliments the story and dialogue, which reads at a breakneck speed. The fat has been trimmed in every issue thus far, and the story is pretty straightforward. All of that is definitely meant as a compliment.

Catwoman #6 ends this first post-wedding arc for Selina Kyle. It’s not epic or trying to change the comic book world, but it’s a lot of fun. Give credit to Joelle Jones, who already had me with her art and now has won me over with her words. I’ll be happy to follow Selina on her next adventure. – Ryan Lower