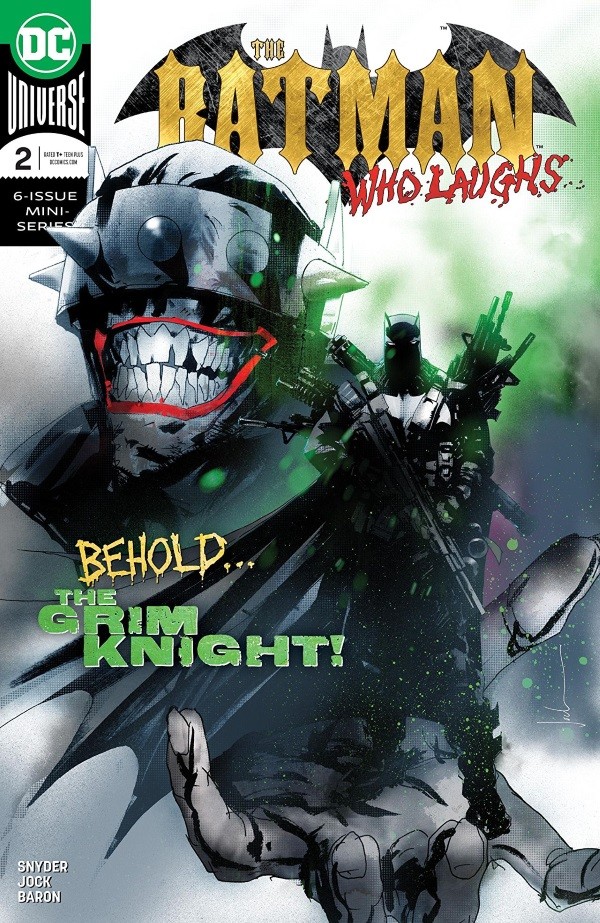 SYNOPSIS: After the shocking ending of issue #1, a ticking clock sets Batman on a trail throughout the different realities of the Multiverse. He starts to see all the iterations of his life, and what could have been…but more importantly, Bruce Wayne begins to deduce that his current life is somehow wrong and that all the mistakes he’s made are somehow connected. Meanwhile, the Batman Who Laughs raises the curtain on his second act, pulling out the big guns to break into Arkham Asylum…enter one of the most punishing Batmen of the Dark Multiverse: the Grim Knight!

Before I get into this review, I want to give a huge thank you to BOF’s editor and chief, Bill “Jett” Ramey, for this incredible opportunity. I have been waiting anxiously for The Batman Who Laughs since it was announced, and to be able to review it for my favorite site on the web is truly an honor. Bill makes everyone he can a part of the Bat-Family, which is a testament to why he runs the most respected and best Batman site on the net!

Wow! How else can I start?

My two favorite fictional characters are hands down Batman and The Joker. Their battle, their yin and yang, and the ways they complement and balance the other have made for some of the best and most intriguing storylines in the history of fictional storytelling.

Say what you will about Metal; I personally enjoyed it. Even if you are a fan of Batman in his more natural element I’m sure you would concede that the idea of Nightmare Batmen who are made from the Dark Knight’s greatest fears is a pretty original and extremely enticing concept. But, even more intriguing, is what happens when you combine that yin and yang? “Perfection.”  We’ve seen Batman beat countless enemies. We always know when he faces The Joker that he will eventually come out on top, no matter how complex the plan is or how difficult the obstacles are that he faces.

But, what happens when Batman faces a version of himself who has the intelligence of Batman and The Joker, who knows all of Bruce’s secrets, and has even lived his life and thus gained all of the same experience and training?

Issue #1 gave us a glimpse of the evil plan, as we were introduced to the “Grim Knight,”  yet another Nightmare Batman that we learn the Batman Who Laughs has been “saving” in issue #2.

Issue #2 picks up immediately where #1 left off, as we see Alfred (very disdainfully) trying to save The Joker on the operating table. Bruce is frantically pumping himself full of every Joker anti-venom he can find to keep from becoming the Batman Who Laughs, as he races to think of a solution to the unsolvable problem: Beating a totally evil version of himself who holds nothing back.

Watching Bruce battle the transformation, as traits of the Joker starts to show through at random moments, is both fascinating and terrifying. Will Bruce take The Joker’s advice and become what he is fighting to win?  As we see the Batman Who Laughs destroy Wayne Enterprises and leave dead Bruce Wayne’s lying around Gotham, we realize our hero is running out of options.

When The Joker wakes up to Batman berating him to divulge the Batman Who Laughs’ plan, Joker tells him there is only one person who might know. Oddly enough, it seems Commissioner Gordon has already discerned this too. I don’t know what this means or how this person could possibly know the plans of a twisted Batman from another universe, but I’m sure the answer will be as mind-blowing as the rest of the story so far.

Scott Snyder is a master. Everything he has written, from the New 52 Batman to Metal, is all culminating in this battle.

When we read comics, in the back of our minds I think we all know that the hero will prevail. Maybe they will lose something along the way, but in the end, they will win, especially when you are talking about Batman. This might be the first time I’m legitimately questioning if that will happen. I am on the edge of my seat and think this will be one for the ages. – Mance Fine