SYNOPSIS: Batman is on a desperate hunt through Gotham City, tracking down the dark version of himself known as the Grim Knight. But the serum Batman’s been self-administering has started to transform his mind, making him into something much darker…something amoral…something like the Batman Who Laughs—and he’s starting to lose his grip on reality. Toeing the line between vengeance and justice, Batman must struggle to keep his moral code as the Grim Knight gains control of the Batcave, sending all of his vehicles and weapons on a collision course with Gotham City. The Grim Knight, the Batman Who Laughs, even allies like Jim Gordon and his son force Batman to pull the trigger…and activate the Last Laugh. Will Batman be the savior of Gotham City once more? Or is he the kill shot?

THE BATMAN WHO LAUGHS #4 Review by Mance Fine 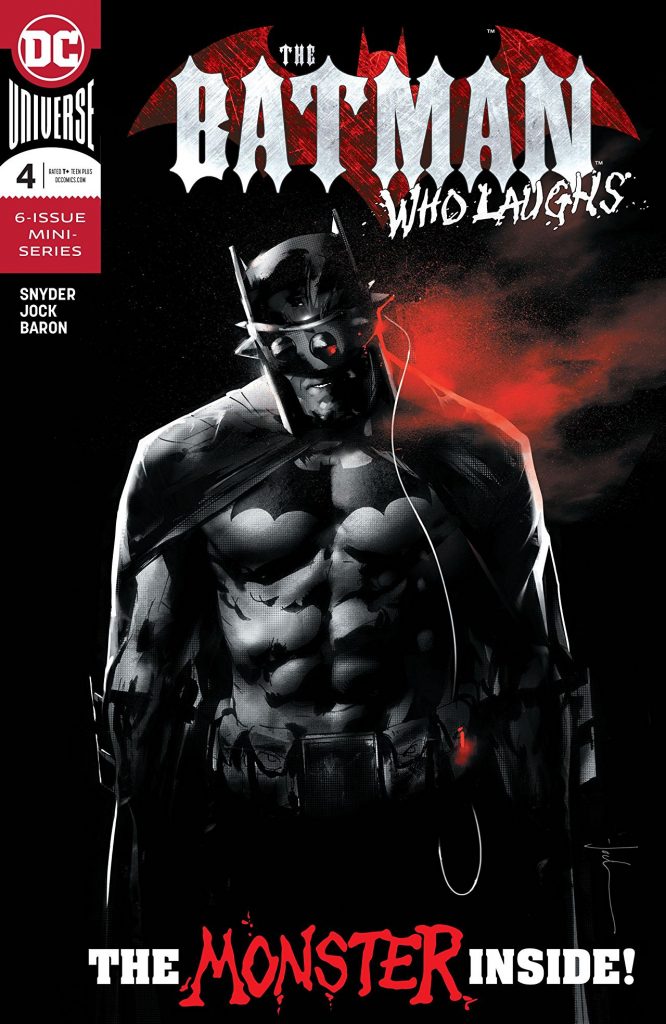 With the synopsis doing such a fantastic job of doing what synopsis’ are supposed to do…er…wait.

That’s how I started my last review, and for some reason, that statement is not true with this issue.

Is the Batman Who Laughs breaking the fourth wall and throwing us off with the synopsis?!

For whatever reason, something is a bit off with this issue’s synopsis, as we don’t see the Grim Knight take control of the Batcave, nor do we see Jim Gordon and son force Batman to activate “The Last Laugh.” Batman is certainly starting to lose his grip on reality though. BUT, all synopsis issues aside, Snyder delivers. This issue is fantastic.

Batman has done it.

He’s done fighting the transformation, and he’s let The Joker toxin that created The Batman Who Laughs take hold of him.

One thing I love about this series is all of the exchanges between characters being the opposite of what we’ve come to expect. Take the opening fight (that even gets physical) between Bruce and Alfred; we’ve seen Alfred walk out on Bruce, berate Bruce, or give Bruce a stern talkin’ to, but this might be the first time we’ve seen Alfred go after Bruce. And all because Alfred couldn’t bear to see Bruce turn into that monster.

The exchange between Joker and Batman was equally intriguing. While Batman is checking the reservoir for poison, Joker arrives and tells Batman his greatest secret. Then Batman asks his “friend” to ensure that, if he did transform into that monster, Joker would do what needed to be done. Joker gleefully agreed to blow his head off were that to happen. And all because Joker couldn’t bear to see Bruce turn into that monster.

I’m not sure how The Joker transformation gives both iterations of Batman this ability to see, but we finally see The Batman Who Laughs unmasked and needless to say, he doesn’t exactly have a face (or eyes) that a mother would love.

We know The Batman Who Laughs is bringing over (and immediately murdering) Bruce Wayne’s from alternate dimensions who have quit being Batman in favor of retirement, happiness, or because they’ve found an effective way to win Batman’s war on crime. We know he’s enlisted the Grim Knight and captured Gordon to make him watch. We know he plans to use the Last Laugh to spread a toxin over the city that will turn everyone into the worst version of themselves from the Dark Multiverse. Things are never as they seem with Batman OR Joker, so what kind of curveballs will The Batman Who Laughs throw next? I can’t wait to read this all as a one-shot, and can’t wait to see where Snyder takes us next.

While I initially found this to be a flaw in the story, I realized it’s because neither of these Batmen shares the code of the true Batman. They may wear Batsuits, they may have had Robin’s or Batmobiles or an Alfred, but they will never truly think like Batman because at his very core is his code: Batman doesn’t kill.

The mission never ends and he’ll protect the innocent and his city at all costs.

They may seemingly be one step ahead (for now), they may think they never quit, but these dark Batmen are pale imitations (hehe) despite how formidable they seem.

The Batman Who Laughs was weak and didn’t resist the toxin or the temptation to become a monster. I believe this will be his undoing, and I believe our Batman will never become that monster…

But I could be wrong. – Mance Fine

GRADE: A (Still on the Scott Snyder Scale)

Will David Mazouz Play Batman in GOTHAM’s Finale? “Yes and...