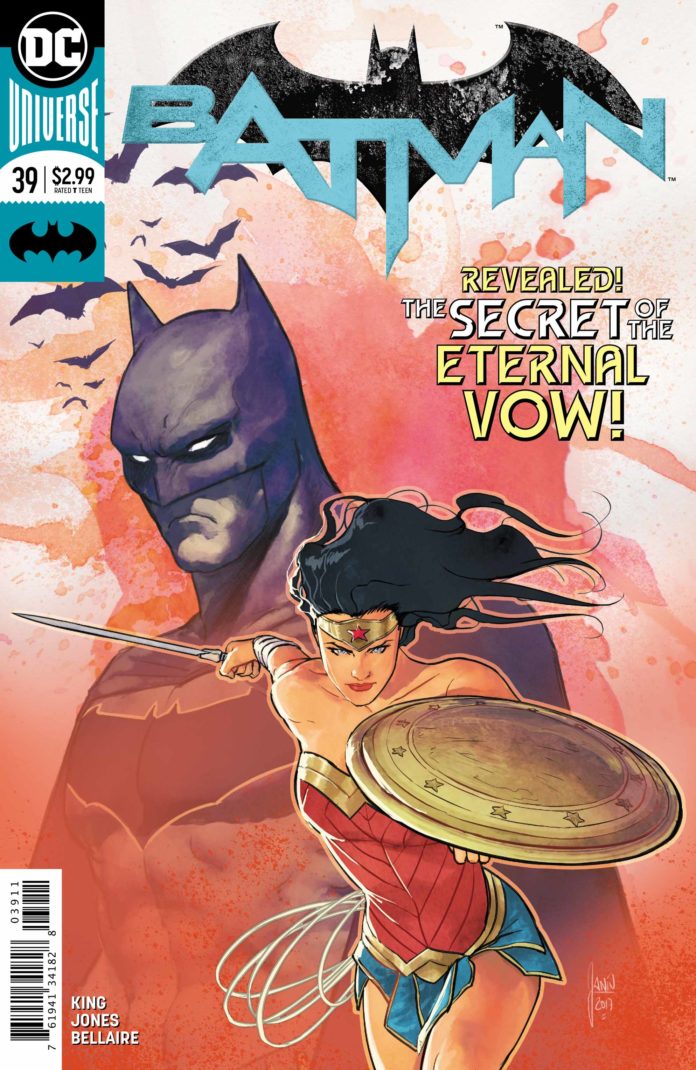 Gotham City! Commissioner Jim Gordon sits with his coffee in his office, trying to get a word in about Kite Man (whose very name has so much more resonance these days thanks to what writer Tom King did with him in “The War of Jokes and Riddles”) while his daughter, Barbara, gabs about football on the phone. But both conversations will have to wait after Jim looks out his window and sees… the Batsignal.

To the roof! Gordon and a pair of Gotham’s finest find who pulled the switch… and the lasso on her belt glows as golden as the bulbs that beckon The Batman.

King gets some good humor out of Gordon’s quick chat with Wonder Woman, but soon the roof belongs only to Batman and Diana. Many years ago, on a mission for the Justice League, Bruce and Diana briefly fell into another realm overrun by hordes of horrible monsters formed and fueled by the sin of men.

All that stands between their entry into our world is “The Gentle Man,” whose appearance is anything but amiable. Heavily armored and powerfully armed, he ably holds the beasts at bay… forever. And just before Zatanna yanked her compatriots from The Gentle Man’s dimension, Batman and Wonder Woman promised someday to find a way to give him a break.

That time… is now. The Gentle Man will enter our realm for a brief respite from his terrible, noble guardianship against impossible odds, while Wonder Woman and Batman will slide into his to fight his war for a while.

Selina Kyle is not amused.

And yet, in typical Tom King fashion, her banter about it with Bruce is amusing.

“Wait. Don’t you war on crime? Isn’t that your thing?”

And have a thing he does, when Selina sees the Bat-motif of the mighty new suit he’ll be wearing into hell. (Wonder Woman, of course, thinks it’s cool.)

But there’s a twist that will be familiar to anyone who read Joe Kelly’s ACTION COMICS #761 from November 1999. (King hadn’t read it, and took the time on Twitter to discuss his own inspirations for this story while still giving props to the ACTION crew.) The realization of what’s really happening hits Selina hard, just as Bruce and Diana, who are living it, are dealing with it in a way that leads to gut-punch, say-what-now of a cliffhanger that’s uniquely harrowing after all the groundwork King’s been building in this title for a long time.

King teams again with artist Joëlle Jones, who drew the handsome interiors for the dangerous quest Bat and Cat undertook in issues #33-35. And just as her designs there left me wanting action figures and statues of Bruce and Selina in their desert gear, all the kids will be asking for toys of the Gentle Bat- and Wonder Wo- Man creations Jones conjures here.

Jordie Bellaire’s colors continue to be one of this book’s greatest assets; I love the light of the Batsignal hitting Wonder Woman’s hair from behind, the grit of the contrast between a Gotham night and an otherworldly eternity, and all the other amazing accents she gives to Jones’s incredible pencils and inks. Jones brings great variety to the creatures and action, and she’s so, so, so good at putting life and emotion into faces and eyes.

If you’re as invested as I am in King’s run, this will be the most dangerous issue yet, in a way you won’t expect. Once again, we’ve got a wonderfully written, great-looking issue of BATMAN to savor. Don’t miss it. – John Bierly