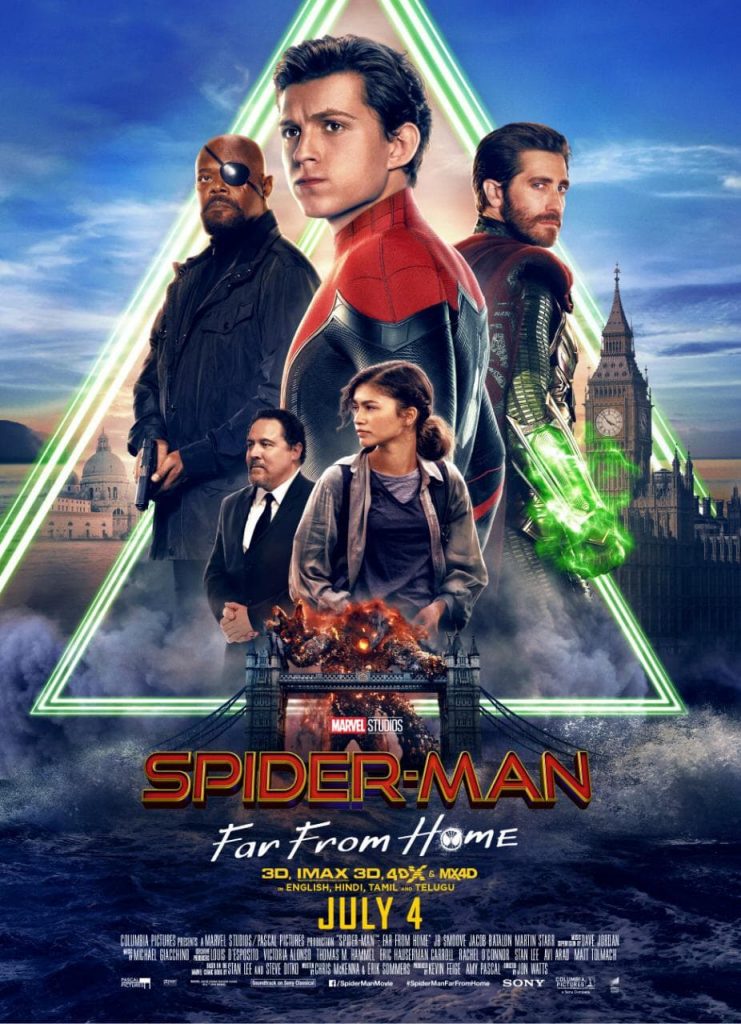 Spider-Man: Far From Home carries some heavy emotional baggage: grief, trust, truth vs. illusion. But that doesn’t mean there’s no fun involved. In fact, my favorite parts of the film are Peter Parker (Tom Holland) just being a kid with his friends. Peter may be a superhero, but he faces the same insecurities as all 16-year-olds, especially when he’s trying to figure out to tell MJ (Zendaya) that he likes her…a lot.

The film opens in the aftermath of the events of Avengers: Endgame with all the characters dealing with the effects of what is now called “The Snap”. Writers had to figure out what to do with the 5-year gap between the disappearance/disintegration of so many people and their unexpected return. Peter was one of those folks, and now he’s just trying to complete his junior year in high school while grieving the death of his mentor and idol, Tony Stark/Iron Man. He just wants to forget about all that superhero stuff and enjoy a school summer trip to Europe with his friends. By the way, the hilarious teacher/chaperones Mr. Harrington (Martin Starr) and Mr. Bell (J.B. Smoove), are worth the price of your ticket.

Peter confides his plans to tell MJ how he feels about her on top of the Eiffel Tower to his best friend, Ned (Jacob Batalon), one of the few people who know Peter’s secret identity. All the while, he tries to avoid Nick Fury’s (Samuel L. Jackson) phone call, knowing he’ll have to abandon the trip and do some save-the-world, barely achievable tasks instead.

While he tries to avoid Fury and Happy (Jon Favreau) and just hang out, a new threat to life on earth manifests. Huge monster-like creatures appear suddenly and attack people and places, obliterating them. They seem to be defeated by a new, unknown superhero who everybody calls Mysterio (Jake Gyllenhaal). Mysterio is the alter-ego of Quentin Beck who explains to Peter that he’s from future Earth in a parallel dimension where the creatures he calls the Elementals destroyed everything and have now set their sights on Earth in this dimension. Peter agrees to resume his role as Spider-Man to help defeat the Elementals (Hellfire, Hydron, Magnum, and Zephyr). Each can harness the power of an element: fire, earth, water, or wind.

Peter still leaves on his trip, but the monsters pop up to stymie any plans for relaxation he might have had. Peter trusts Mysterio to take the lead since he seems able to defeat the monsters.  Peter can then take a back seat and try to enjoy his summer vacation. Of course, that doesn’t last long.

Peter is also tortured by self-doubt and the desire to have the crushing responsibility of being Spider-Man taken off his shoulders. As the storyline unfolds, he discovers that not everything is as it seems, and he’ll have to determine which threats are real and which are an illusion. As Mysterio points out, people are willing to believe anything if it suits their purposes. How Peter discovers that all of the new threats facing him, and the world, may not be real is something I’ll leave you to discover for yourself.

The film suffers from some pacing problems that cause it to lose momentum at times, and I didn’t think the villain’s motivation for evil acts was as compelling as it might have been.

All that said, I liked Spider-Man: Homecoming better, but Spider-Man: Far From Home features fine performances from its actors and the exciting action scenes you expect from the Marvel Universe, so you won’t be disappointed. Also, location filming in Venice, Prague, and London doesn’t hurt!

Be sure to stay through the credits for two bonus scenes, one mid-credit and the other at the end. – Jo Hyde