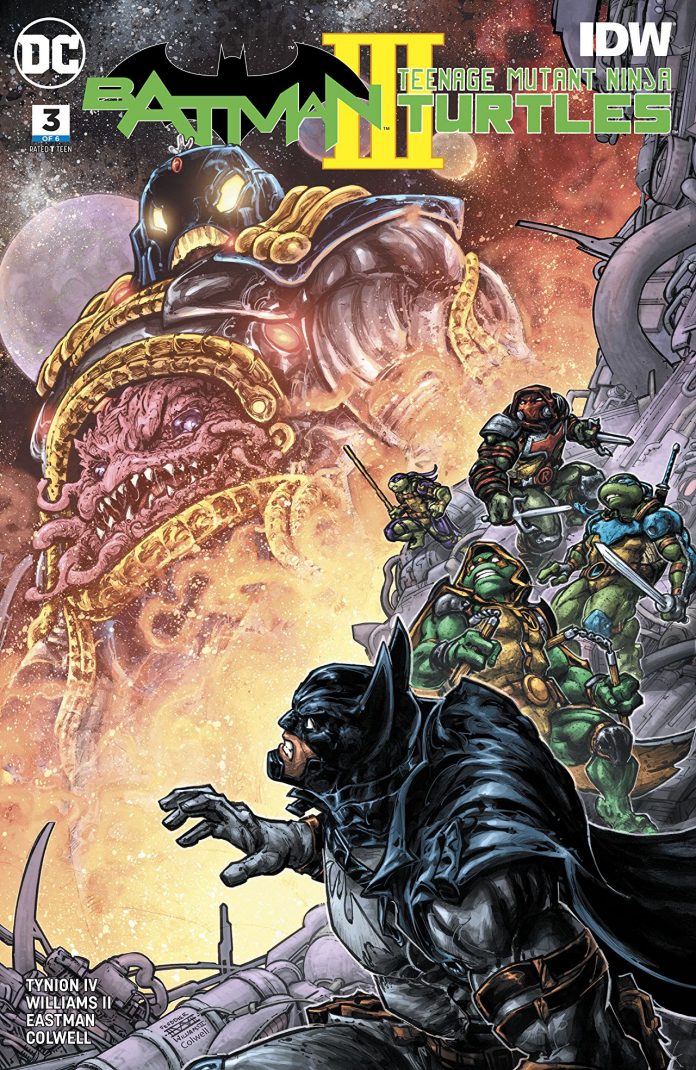 SYNOPSIS: The origin of Batman…together with the origin of the Teenage Mutant Ninja Turtles? The stories are familiar, but through the prism of this altered reality, clearly not the same. An uneasy feeling sets in that everything is not what it seems. But the Laughing Man pays a visit to a familiar Turtles ally to make sure this world stays exactly as Krang has remade it.

That’s the main focus of this month’s Batman/TMNT #3. The action and fighting take a break, but that doesn’t mean this chapter is a waste.

In order to save this multiverse problem, everyone needs to remember their original story. Batman takes a trip to his old home, where he reunites with a familiar ally. Black and white Raphael submits a plan to the Turtles to suit up in their original attire. April O’Neil enters the picture in an important role. And an infamous character from the Turtle world is teased for future issues.

As mentioned above, there isn’t much action in these 20+ pages, compared to the previous two issues. Good thing writer James Tynion knows action does not a good story make. Instead, we get to know these versions of our characters a little better. We (yet again) get to witness the Wayne murders. However, it’s very important for us to see this so we can understand Batman’s place in this world. Yes, Joe Chill takes out Gotham’s favorite couple, but not in a way you’d expect. And the results have a direct link to the Turtles.

Each panel connects to the next, and therefore this issue flies by. Tynion did a great job here building upon the two previous issues, while also peeling back the layers of the story and setting us up for the rest. While I enjoyed what he’s written so far, I may appreciate this comic the most thus far.

Of course, Freddie Williams brings his best here. I think I was most impressed with his opening pages, the Wayne murders. This is something that many of us feel we didn’t need to see here, but his way of portraying this was extremely effective. As for the other characters in the story, I can’t get enough of his version of these Turtles. They ooze comic book fun and distinctly stand out from each other. A quick shoutout to Jeremy Colwell on coloring, as it complements every detail on Williams’ pages.

Another exciting chapter in this miniseries. Tynion and Wiliams are crafting another great story involving some of my favorite fictional characters. I’m not usually a fan of the multiverse, but they’ve found a way to make it fun, dramatic and exciting. Certainly, everything will end up normal in the remaining three issues, but I’m looking forward to the journey. – Ryan Lower

THE BATMAN Filming in Chicago at a TDK-Familiar Location