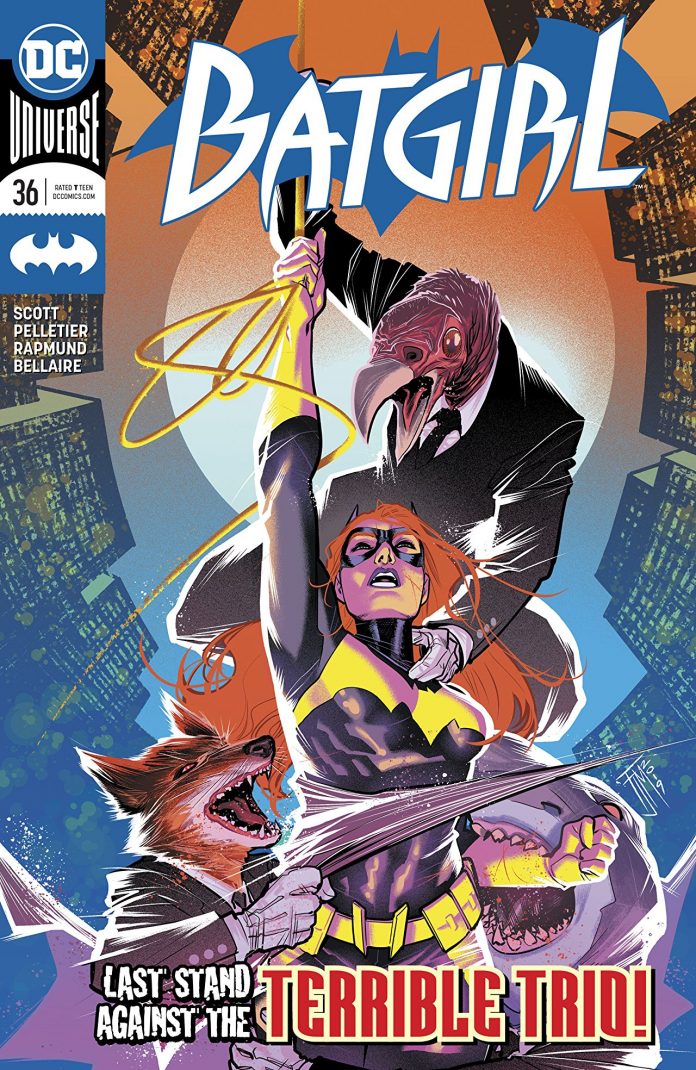 SYNOPSIS: Batgirl escapes the madness of Fox’s Den only to discover Vulture is hot on her tail and itching for revenge. Does she stand a chance against this bird of prey? Meanwhile, the fight for Gordon Clean Energy rages on as the workers discover the greatest threat to their employment future is Batgirl herself!

Joshua Middleton delivers another amazing variant cover here. It’s got a recognizable painterly texture similar to some of his others, but he changes up his drawing style significantly. Sometimes he uses an almost photo-real style, while this one has a bright-eyed Barbara who looks like she could have stepped out of a classic Disney movie. The main cover by Francis Manapul, with its bold colors and dynamic angles, makes me wish he was also doing the interiors.

The story picks up with Batgirl, the Terrible Trio and a crowd of wealthy scoundrels locked in a burning building. BG is determined to cut through the fire door in order to save all the degenerates inside, but the ego-maniacal Vulture is not letting that happen. The writing is strong all around in this one, and Mairghread Scott gives Batgirl some badass lines. I appreciate how once Vulture reveals what a psychotic zealot she is, Batgirl wastes no time trying to reason with her anymore.

Realizing his former prey is now his only chance for survival, Fox lends a helping hand. This gives Batgirl the freedom she needs to get through the door and save all but one of the people inside. Bruised, beaten and worn out, Barbara leaves the rest of the work for the authorities. After a costume change, she goes to meet with best friend and business partner Alysia, only to receive another crushing blow.

The story ends with Barbara losing the company she founded, along with her main source of income and the new apartment which she can no longer afford. She’s forced to move into a trash heap in the Narrows and has, by all apparent circumstances, hit bottom. Rather than dwelling what she’s lost, Barbara breathes in the freedom of choice now ahead of her. She gives a little monologue at the beginning of this issue explaining the absolute necessity of believing she can overcome impossible odds, and it frames her actions throughout. She’s exercising the power of positivity in all aspects of her life, against all kinds of obstacles.

After wrapping up this storyline, we’re left with a fresh start for things to come. This includes a new creative team next month, and while I’ve enjoyed the way Scott writes Babs, I welcome the change and am excited to see what the new team brings to the table. I’ve been a fan of penciler Giuseppe Camuncoli in the past, so I look forward to his take on Batgirl. – Rob Veatch III

GRADE: B+ (minus half a point for not starring Cassandra Cain)

Who Should Be the Next Batman? I’ve Got a List!