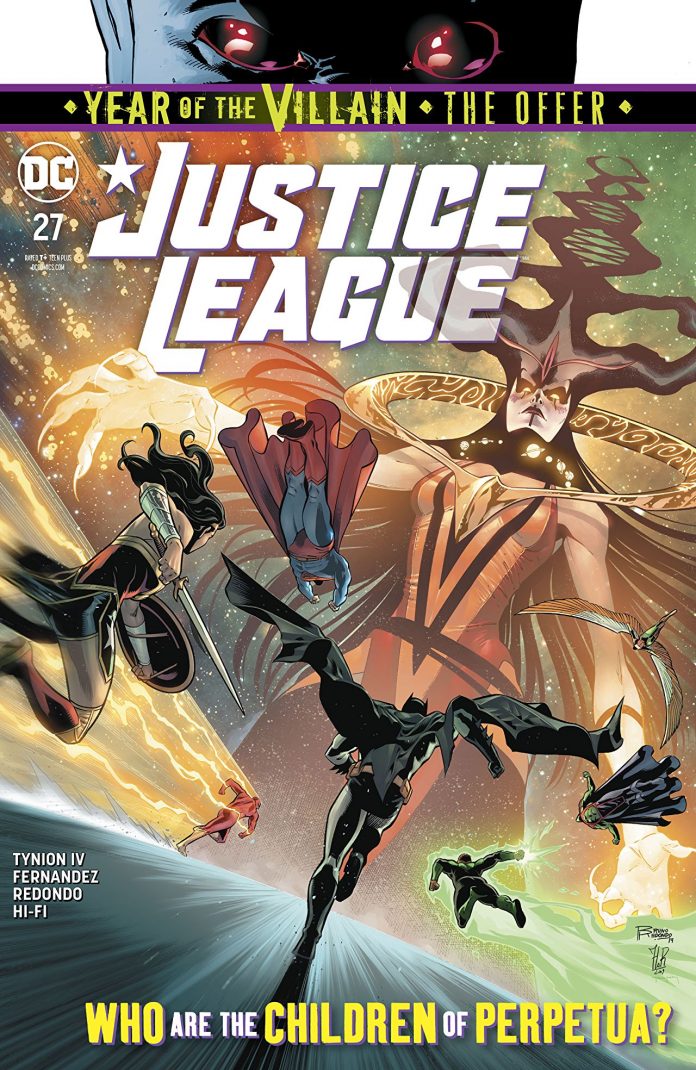 SYNOPSIS: Eons ago, the Monitor, the Anti-Monitor and the World Forger stopped the rise of Perpetua—but can they overcome billions of years of mistrust to work together and do it again?  Plus, Lex Luthor’s offers across the DC Universe haven’t gone unnoticed—Martian Manhunter is aware of “the Offer.” And J’onn J’onnz will pay the price.

The current run of Justice League has done something really nice that I wasn’t really expecting when I started reading it.

Not only has it made an effort to highlight some of the lesser known (non-Trinity) characters, it has at times flirted with being a Martian Manhunter title. Even when the focus shifted more to Superman and Batman (see “The Sixth Dimension” arc), Manhunter played a pivotal role both as the chairman of the League, but in his personal relationship with Hawkgirl, previously hidden origin elements, and the introduction of his son from an alternate reality.

Justice League #27 has more Martian Manhunter goodness in store for you.

It’s clear that James Tynion IV loves this character and his handling of him is superb. In fact, this may be one of my favorite Tynion issues ever, which might not seem like great praise since I tend to be a bit critical of him on this series but I mean it to be.

J’onn’s backstory is handled so well here that it seems almost effortlessly woven into the larger story with Perpetual (of whom we’ve still seen far too little in my opinion.) Tynion shows us a Martian Manhunter that is careful and thoughtful without ever losing sight of his raw power.

The emotional and historical connection established between J’onn and the Luthor family (see issue #17) returns to the forefront of this story and the issue opens with MM under attack from someone seeming to be Lionel Luthor. Now, it turns out that it is not in fact LL; but I’ll leave the true identity for you to discover.

What I will say, is that it’s apparent that Tynion is laying the groundwork for a deeper connection between J’onn, the last of the Green Martians, and Perpetua, who had created a human/martian hybrid as the perfect soldier of death in her efforts to turn the multiverse into a weapon.

The remainder of the issue largely focuses on the League’s search and recruitment for the Monitor to aid them in their yet unspecified plan to save the multiverse from it’s impending cosmic judgment. Tynion doesn’t handle this section as well, losing a bit of the unique voices between characters, especially the World Forger and the Monitor. However, the connection he weaves to the previous DC “Crisis” events is excellent and will make DC continuity fans smile big.

The art on this book is handled (mostly) by Javier Fernandez and his work is strong. Both the still scenes of tension where we find J’onn held in captivity and the action scenes with Hawkgirl are handled equally well. He is able to instill a sense of kinetic energy in almost all of his panels which moves the story along nicely. The other artist on the book is Bruno Redondo, who brings an almost candied newspaper style to his panels. His characters are far more stylized with an interesting approach to the line work that feels a bit more pop art than we’ve seen on this title. It’s solid work, but the transitions are odd and took me out of the story a bit.

Overall this is a very good issue of Justice League. The focus on Martian Manhunter and the deepening of his involvement in the plot is excellent. The art is strong if disjointed. Oh, and the surprise appearance at the end of the issue has me anxiously awaking Justice League #28. – Garret Grev