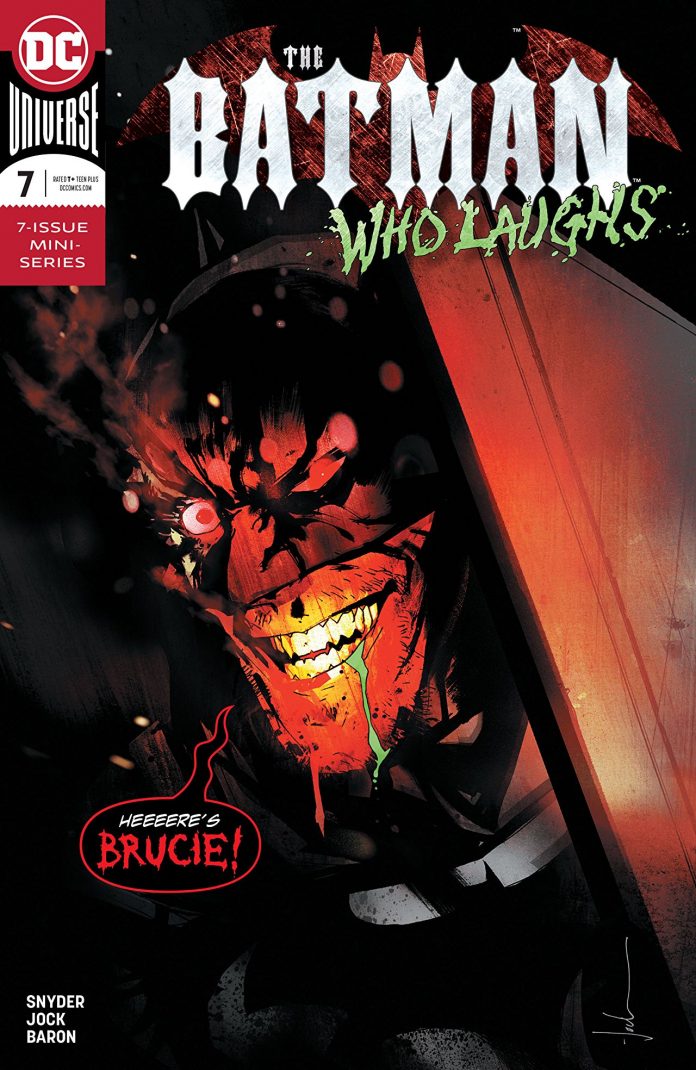 SYNOPSIS: It’s the final showdown between Batman and the Batman Who Laughs…but how do you defeat a foe who knows your every instinct and every move? Bruce Wayne will have to outsmart Bruce Wayne in this ultimate test of good versus evil. You can’t miss this finale to the epic miniseries that will tear up the very foundations of Gotham City!

The final battle is here and it doesn’t disappoint!

Snyder caps off his miniseries with a surprise 7th issue where Batman and James Gordon, Jr. face down their evil inner demons and battle to save Gotham from the twisted Batmen from the dark multiverse.

I must admit that I was a bit thrown by James Gordon Jr. playing such a prominent role in this story, but by this last issue, I couldn’t have been happier with the story arc between James Jr., his father, and the Grim Knight.

The parallels Snyder drew between James Jr. and Batman both wrestling with the temptation to let go and become killers was fascinating to witness.  And by the end of the series, I am really hoping he gets some true redemption and a chance at a relationship with his father.

Snyder always finds a way to leave the reader feeling more invested in the characters he writes than any writer I can think of.

As Batman fans, we constantly debate what the “right” interpretation is of Batman and what his defining characteristics are. It seems to me that one of the only universally agreed-upon truths in comics is that Scott Snyder gets Batman down to his very core.

Snyder can take these fantastical elements like dark metal and Batmen from other multiverses and weave stories around them that focus on very human struggles and temptations and leave you feeling like you just finished an emotionally draining film like THE GODFATHER instead of the stereotypical comic story.

Spoiler Warning for the remainder of the review!

I loved the moment that The Joker stops Batman from losing himself and delivers on the promise he made in issue #1.

In addition to “getting” Batman, Snyder writes the Batman/Joker dynamic better than any writer who has written the characters and stands alongside Alam Moore/THE KILLING JOKE, Christopher Nolan, and Paul Dini when it comes to Batman and The Clown Prince of Crime.

I also can’t wait to see where Snyder is going with Gordon’s cliffhanging transformation in the end.  We will see!

If I am nitpicking, the few gripes I have about the story are…

1) How Batman just kind of unexpectedly staves off the transformation (though Alfred attempts to explain this in a clever fashion at the end of the story, it kind of just ended up being “because he’s Batman”), and 2) I felt like The Batman Who Laughs as a character wasn’t too different from the Joker in Snyder’s “Endgame;” in that he was a demented and soulless clown who wanted to turn Batman into what he hated by transforming the city into some version of himself.

In other words, I didn’t see a lot of the Batman side in The Batman Who Laughs’ actions/strategy.

Where he was unique from The Joker was his personal ties and knowledge of Bruce, his childhood, his relationship with Alfred (there’s a great moment in the finale where The Batman Who Laughs tells our Alfred what happened to his counterpart).

These nitpicks will almost assuredly be addressed by re-reading the story in its entirety, as I am always catching subtleties that I missed when reading Snyder’s work over again.

Speaking of, there’s nothing better than finally having a complete series once the final issue comes out and getting to read the whole story in one sitting!

I am very excited that it seems like The Grim Knight and the Batman Who Laughs are here to stay for good. Both (seemingly) survived, and Batman has closed off the portals to the Dark Multiverse, so both of his doppelgangers are imprisoned.

What will this mean for Batman?

What about Bruce Wayne?

It seems their next target is the Man of Steel, as we are teased that the horror will continue in the new BATMAN/SUPERMAN title.

The Batman Who Laughs made short work of The Man of Steel in his universe, let’s hope Batman can prevent that in their reality!

We are constantly being spoiled by Snyder, and this title is no exception. He’s in a league of his own and is constantly being paired with equally talented artists like Jock, who knocks the visuals out of the park for the entire series.

Buy the trades, buy the variants, buy the collected edition, and keep these guys in the Batcave for as long as they’ll stay! – Mance Fine