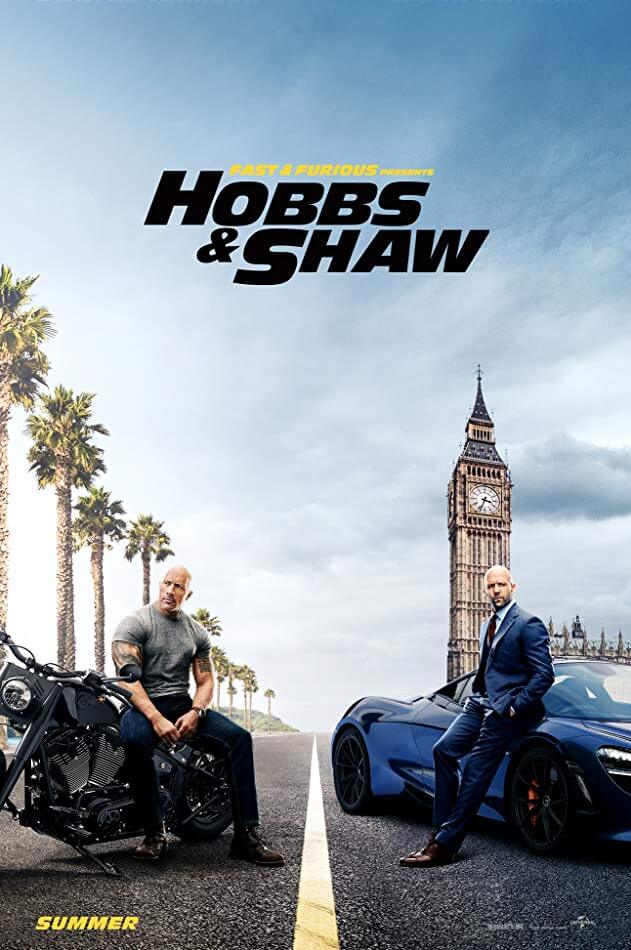 Looking for some relief from the stressful news headlines these days? Hobbs & Shaw, a spin-off of the Fast & Furious films, is just the ticket. It’s exactly what you would expect, and that includes both the good and bad aspects of the film.

Dwayne Johnson plays Luke Hobbs with his usual swagger and larger-than-life presence. He may not be the world’s best actor, but when he’s on-screen, he owns it. Plus, his line readings are decent and you didn’t come to see him talk anyway.

Likewise with Jason Statham as Deckard Shaw, who is transformed in this film from villain to hero. His British accent doesn’t really give him an advantage in the acting department, but, again, you didn’t come to see him talk.

Vanessa Kirby as Shaw’s sister, Hattie, steals every scene she’s in, because in addition to some mad martial arts skills, she can actually act. The same is true for Idris Elba who plays the villain, Brixton. He may be given many ludicrous lines to say and actions to do, but he does them with such style that you don’t notice.

Two unexpected highlights are extended cameos by Ryan Reynolds as needy CIA Agent Lock, and Kevin Hart as Air Marshall Dickley. Yes, you read that right. Did I mention that the script is trite and clichéd? Unfortunately, that includes entirely too many d**k jokes. It’s a 13-year-old boy’s dream — and that would be 13-year-old boys of all ages (genders too!). The verbal sparring between Hobbs and Shaw usually features their notions of masculine superiority or lack thereof. They’re supposed to be bonding, after all. That said, the audience loved every corny joke and bathroom humor sequence. Like I said, you didn’t come to this film for an intellectual experience.

Although her role is little more than an extended cameo, Helen Mirren as Shaw’s mom Queenie is wonderful, as usual. In a film that’s really about 30 minutes too long, she definitely could have used more screen time.

One of Johnson’s WWE pals (also his cousin in real life), Cliff Curtis plays Hobbs’s estranged brother, Jonah, who’s bitter over Hobbs deserting the family home in Samoa. If the script is nothing else, it’s entirely predictable. You know reconciliation for all estranged parties will ultimately happen.

As for the story, you already know it. Two rogue strongmen play superheroes to — you guessed it — SAVE THE WORLD. In case you don’t get it, they remind you throughout the film. Now, I will say that their foe is a little more than they bargained for. Elba’s character Brixton is a biologically enhanced, cyber-strengthened adversary who seems indestructible. He’s bulletproof, unfazed by the myriad blows that would put a lesser man into a coma, and smart. So how will they do it? How will they preserve mankind? Well, you’ll just have to see the film to find out!

Of course, there’s an evil corporation behind all of this: Entheon. One day, writers are going to run out of names for evil corporations as they are ubiquitous in this genre of action film. Entheon has developed a virus that can potentially wipe out mankind so they can replace mere humans with hybrids like Brixton. It defies logic as to how this would make a better world, but, again, you didn’t come to this film to think! The action sequences are exciting and well done, including a few that I’ve never seen before. The fight scenes are well-choreographed, ridiculous as they may be. There are car crashes and explosions galore, as well as some pretty impressive driving stunts.

The bottom line is that if you like fast cars, motorcycles, and seeing things blow up, you’ll love Hobbs & Shaw. Director David Leitch knows his audience, and I’m sure that folks who aren’t interested in this sort of thing will skip it. It has a definite audience, though, as indicated by the preview audience’s applause at the end. Be sure to stay for some goodies mid-credits! You know this film is the beginning of a franchise. – Jo Hyde