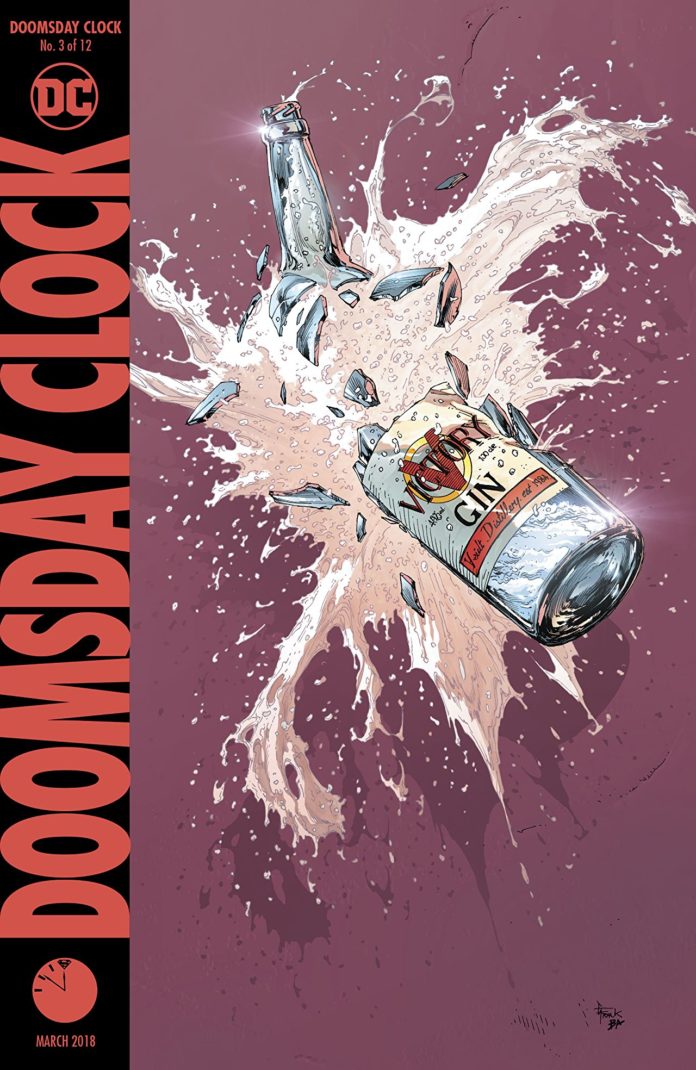 SYNOPSIS: The story takes a turn in the third chapter of this 12-issue series you never thought you’d see, from writer Geoff Johns and artist Gary Frank.

Doomsday Clock #3 spends 30 pages connecting two DC worlds. Continuing last month’s shocking cliffhangers, we pick right up with the reunion between Ozymandias and the Comedian. It’s a fight many of us never thought we’d see, and it’s about as even as we would expect. It lasts long enough to satisfy our appetite, and leaves us wanting more. Meanwhile, Rorschach and Batman (a union we NEVER thought we’d see) fleshes out in surprisingly humorous ways. Rorschach is on a quest to explain the Watchmen story to the Dark Knight, and plead that he help find Doctor Manhattan. THIS matchup ends in an unexpected way.

While those scenes are the highlights, we get an update on a few more storylines. First off, Johnny Thunder’s longing for his reunion with his family, with snippets of a classic noir film playing in the background. And finally, favorite part of this issue, Marionette and Mime take it to some of the Joker’s goons. Their fight is exciting, brutal and hilarious. Oh, and the Mime has a few tricks up his sleeve, so don’t call him silly. Their bout ends teasing what’s to come: the Clown Prince of Crime.

I really dug this issue of Doomsday Clock. It solved a few lingering questions, but kept us asking more. For example: we know who helped bring back the Comedian, but we don’t know how. Rorschach is unmasked, but we don’t have a clear idea who he is (Dr. Malcolm Long’s son?). Everyone is looking for Doctor Manhattan, but what do they really need him for?

I finished the issue on a high, but am questioning its direction just a tad. After 90+ pages of this story, there are still a lot of similarities with the original Watchmen tale. It seems like a continuation and a copy, rather than a different story that’s branched into its own thing. Page layouts and dialogue boxes are the obvious connections. Explaining the fallout of Ozymandias’s plans as well as Rorschach’s journal are another. My biggest standout in this issue, was the noir movie,“The Adjournment.” Sure, it was hinted at in previous issues, but served as a distraction, much like “Tales of the Black Freighter” from the original comic (not really a fan). Maybe it will connect to the main plot in the end…?

I’m also having a little trouble figuring out the ideas and motivations of Doomsday Clock. We have Doctor Manhattan as the bridge connecting the two worlds, but it’s not clear how he’s needed, and what he’d solve. Geoff Johns is building up the meta human theory, which definitely feels like the problem. I’m just not feeling it to be all that threatening…yet. Like I said, we’re only a quarter of the way through the story.

Back to the positive: Gary Frank’s art. Every panel is flawless. He draws in detail, with both the characters and locations. Also, it benefits to have an inker as talented as Brad Anderson coloring each panel. The look of this book is worth the $4.99 price tag alone.

While I may be questioning a few moves on Doomsday Clock, it’s still really entertain and damn good. Issue #3 expands this world but finds a way to keep the scope on a small and personal level, focusing on the interactions between the characters. I loved almost every scene we’re taken to, and I’m really looking forward to next month’s issue. And in case you missed the announcement earlier this week. Issue #5 is delayed a few months, then the book goes to a bi-monthly schedule.

So punch your ticket and enjoy the ride. It’s going to take a little longer for the Doomsday Clock to strike 12.

Review – ANT-MAN AND THE WASP by Jo Hyde