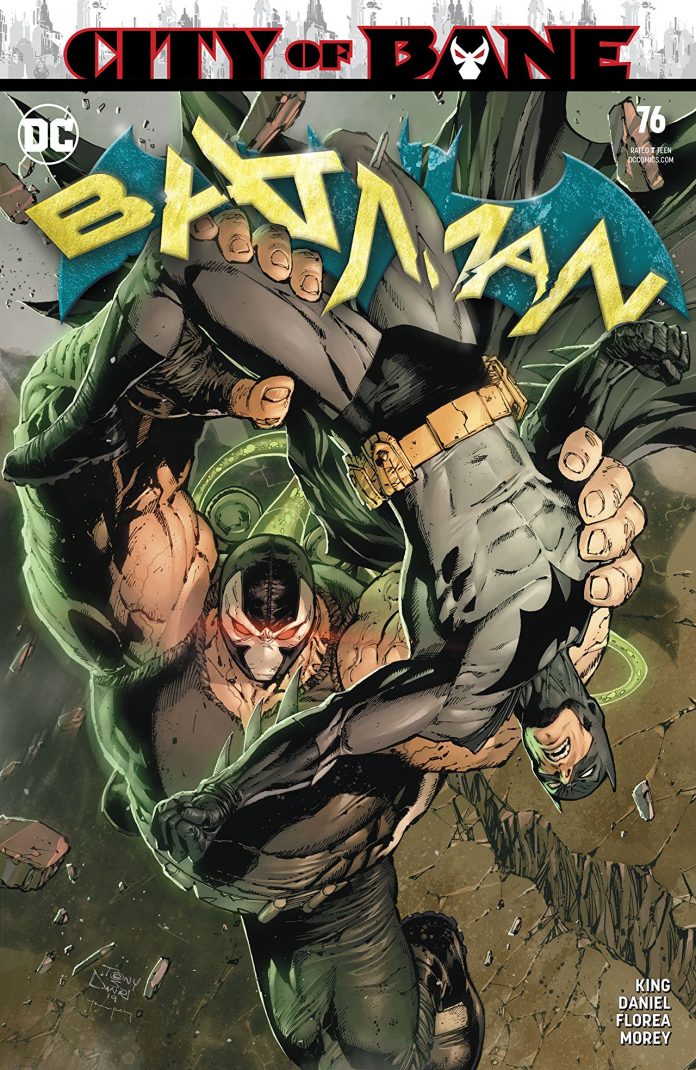 SYNOPSIS: “City of Bane” continues! Bane has taken over Gotham City, and Batman is nowhere to be found. At least, not a Batman anyone recognizes. Flashpoint Batman is now patrolling the city, dispensing a violent brand of justice and taking out rogue villains who haven’t yet signed on with Bane. It’s all building to a rebellion among the bad guys who don’t want to play along— and distrust in those who do! Meanwhile, a surprising ally has come to Bruce Wayne’s aid, nursing him back to health so that he can get back to his city.

Tony S. Daniel’s cover for BATMAN #76 depicts a savage image we’ve seen almost ad nauseam since 1993, as a juiced-out, jacked-up Bane raises Batman over his head for yet another back-breaking blow. This time, the earth beneath them splits asunder in anxious anticipation of the earthquake of violence that’s about to happen atop it.

But this doesn’t happen inside. We never see Bane, and Bruce Wayne spends the entire issue passed out on a couch in Paris while Selina Kyle promises she’ll stop stealing things to subsidize their hiding from the various forces that seek to finish the job Bane and another reality’s Thomas Wayne started.

Back in Gotham, the “City of Bane” abides unabated, and Captain Atom learns what happens the hard way when heroes try to cross the line into Bane’s playground. As Gotham Girl protects the skies from well-intentioned intruders, Thomas Wayne’s gun-toting Batman prowls the city’s bowels for villains who’ve yet to join Bane’s army. One of them is Kite Man (“Hell yeah!”), a fan favorite since writer Tom King made him a person instead of a character, who longs for the real Batman’s return in lieu of the lethal lieutenant who hunts him now. Elsewhere, Tim Drake and Damian Wayne risk life and limb simply by discussing what to do on a Gotham City rooftop.

Daniel’s pencils have a throwback, classically comic-booky feel that lends themselves well to what feels like an old-school Batman event. Action is kinetic, and the character comes through. Tomeu Morey’s crisp colors add urgency and vibrancy to every page.

Tom King’s capable commands of character and dialogue are fully on display as always, especially with Kite Man. But when this one ends on a total non-ending, I kept trying to find more pages. It’s more of an interlude than an issue that will read much better as a chapter in a collected edition than it does as an installment all its own. — John Bierly