SYNOPSIS: A paranoid thriller in space that follows Roy McBride (Brad Pitt) on a mission across an unforgiving solar system to uncover the truth about his missing father and his doomed expedition that now, 30 years later, threatens the universe. 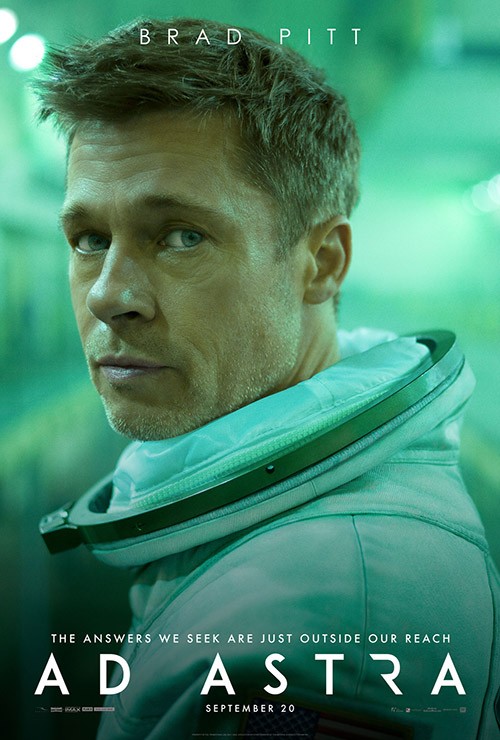 Ad Astra, Latin for “to the stars,” is a bit of a puzzlement.

It’s not the performances or the visual presentation.  Both are well done.

It’s incredibly slow to the point of, dare I say it, being dull.

The trailer promises that you’ll be kept guessing until the end, but I would beg to differ.

For one thing, Brad Pitt’s character, Roy McBride, develops mostly by voice-over. In other words, he tells us what he’s feeling — or not feeling– instead of showing us. It’s true that Roy is a very closed off fellow.

His absent father, Clifford McBride (Tommy Lee Jones), has been gone a long time, like more than 30 years. Roy believes him to be dead. He left for the edges of the solar system to set up a research station in orbit around Neptune to look for extraterritorial, intelligent life. There’s been no communication for years. Clifford is regarded as a hero of space exploration. Roy even says that his father’s heroism is the reason for his own career. But Roy has very conflicted feelings about his father.

Roy is basically estranged from his wife Eve (Liv Tyler) and really alienated from almost everybody. He’s a solitary soul. I guess that’s why there’s so much voice-over. He lives in his head.

There’s a harrowing scene close to the beginning that establishes Roy as an absolute badass, teasing the audience into believing that this will be an action-filled film.

It could have been if there’d been less thinking and more doing.

The narrative set-up occurs when one of Roy’s dad’s best friends from the past, Colonel Pruitt (Donald Sutherland), convinces Roy to go on a very dangerous, classified mission. In fact, it’s so classified that Roy is put on a “need-to-know” status. Highly destructive beams of energy have been firing at Earth and the rest of the inner solar system, and the government believes they’re originating in the area of Clifford McBride’s long-lost space lab. Just in case he’s still alive, they think sending his son Roy is the best way to reach him. At any rate, the beams must be stopped before they destroy the Earth. Sounds promising, doesn’t it?

By the time Roy leaves for the Moon and then Mars to embark on his journey to Neptune, we’ve already suffered through seemingly endless scenes of Roy’s voice-over describing his deteriorating marriage, his strained relationship with just about everybody, and his anguish of having to “fake” feelings…and it’s tedious.

There are a couple of completely extraneous scenes that have nothing to do with the main plot and seem to have been included to show, once again, that Roy is a man among men. Or perhaps the director realized that they needed a little more action in the film. That’s just not a very good way to do it.

When Roy arrives at the United States’ underground settlement on Mars, he still doesn’t know that much about his mission. There he meets the commander of the station, Helen Landos (Ruth Negga), who fills him in on the real story. I’ll leave that for you to discover because the “truth” drives the rest of the narrative.

By this time, the film was strongly reminding me of 1979’s Apocalypse Now, with Roy traveling into the “heart of darkness” to find his own rogue Colonel Kurtz. It’s just that he’s related to this rogue. It’s a long, dangerous journey into unknown territory to look for someone who may or may not be alive, and who may or may not be insane — very Conrad-esque.

Brad Pitt functions as the center of the plot, action, and everything else — always. Luckily he’s an excellent actor who can handle it. He’s the main reason to see the film. It’s too bad he didn’t have a better script to work with.

The film is set in “the near future.”

In this world, space travel is commonplace. There’s commercial travel to the Moon where parts of it belong to different nations who, of course, clash over them. Best not to think too much about the scientific details since nothing is really explained. For example, it only takes 19 hours to fly to the Moon, and Roy is able to reach Neptune in less than 3 months. These space ships must be traveling at extraordinary speeds but we’re never told how this came about. Also, there are permanent settlements on Mars although we only get to see the underground one. Folks are born on Mars and live their entire lives there!

Ad Astra presents a provocative premise but weighs it down with too much introspection and an ending that feels inauthentic. I can think of at least 3 better ways to end this film off the top of my head.

Despite Pitt’s performance and the fascinating depictions of space travel and destinations, Ad Astra fails to captivate the audience. It could have been — and should have been — a better film. – Jo Hyde