Does it bother you that in THE DARK KNIGHT after Batman saves Rachel after she is “let go” by The Joker, they never explained why/how Joker got away or why Batman didn’t try to get back or block the building? I LOVE that film. But that always bugged me and I just take the ellipsis and move on.

JETT SAYS: Nah, I’ve never even thought of it to be honest.  The way I look at it, if The Joker can get into Bruce Wayne’s penthouse without detection, he can get out in turn.

Do you think we will also get costume reveals for Catwoman and maybe a couple of the other main characters when Matt Reeves reveals Pattinson’s Batsuit for the film?

JETT SAYS: I believe that when they drop the first pic of Robert Pattinson as Batman, that will be the sole focus…as it should.  The others will come later…though I’d kinda like to see the film’s logo as well.  Maybe we’ll get that first?

What type of voice will Batman have in the upcoming movie? A growl, a whisper, authoritative? Will it be “natural” or “digitally” enhanced?

JETT SAYS: I’ve got no idea, but my hunch is it’ll be a whisper.

What lesser-used Batman villain would you like to see used more going forward in 2020 in comics, animation, or live-action film?

JETT SAYS: I’d like to see Hugo Strange in a live-action Batman film.

What are your thoughts on Tom King’s Batman run now that it’s over? #BatmanOnFilmMailbag

JETT SAYS: Tough question.  There was stuff I really liked — “The War of Jokes and Riddles” for example — and stuff I didn’t.  Also, it dragged on at a snail’s pace…far…too…long.  If I had to give it a grade, I’ll go with a B-.

1) Filming officially starts on January 13th. Will we get Batsuit reveal in January and do you think it will be as well-received as Affleck’s costume? 2) This Batman won’t kill, will he?  3) all 3 Nolan scripts were praised; are you expecting similar for this movie?

1) It’s possible — it would be a cool way to kick-off production which would bring a lot of hype to THE BATMAN…maybe the logo too… 2) VERY doubtful… 3) Yes, absolutely.  That’s certainly my expectation.

Do you think we’ll ever see a modern-day version of The Riddler in the vein of the video game franchise or in the current comics played by a high caliber actor?

JETT SAYS: Sir, I believe that’s exactly what we’re getting in THE BATMAN.  Let me direct you to BOF’s Everything About THE BATMAN Page.

Will there be any Batman vs. GCPD elements in Reeves’ movie(s)?

JETT SAYS: I don’t know about “vs.”, but I think Pattinson’s Batman will be involved with the GCPD and Sgt./Lt./Detective Gordon in THE BATMAN for sure.

Do you think Commissioner Gordon will finally pay for his New Years’ coffee this year?

JETT SAYS: No.  Batman — well, Bruce Wayne — is a multi-billionaire, so he’ll pick up the tab as always.

Jett, I’ve been following you since THE DARK KNIGHT. Thanks for all you do in how you cover Batman. Two questions: What do you think is the best moment on film for Batman that defines what the character is to you? Second, what is your favorite moment in covering Batman — as in your favorite experience?  Thanks again for being the one I trust to keep me up to date on news about the Caped Crusader. – Jason

JETT SAYS: First of all Jason, thanks for the nice words and for following BOF!  On to your questions…

I have a lot of “favorite” moments from Batman movies, but the one that I’d say defines what Batman is to me is the ending of THE DARK KNIGHT.  Putting the greater good of something bigger than him — Gotham — by making a personal sacrifice — taking the blame for Harvey Dent/Two-Face’s murders — is “Batman” to me.

As for as my favorite experience covering these films via BOF (going on 22 years in 2020) is a tie:  Getting a handwritten “Thank You” letter from Chris Nolan on his personal stationery; and, receiving “We hope you think we did Batman fans proud” text from the Nolans right after I first viewed THE DARK KNIGHT RISES at the Los Angeles press screening back in 2012. 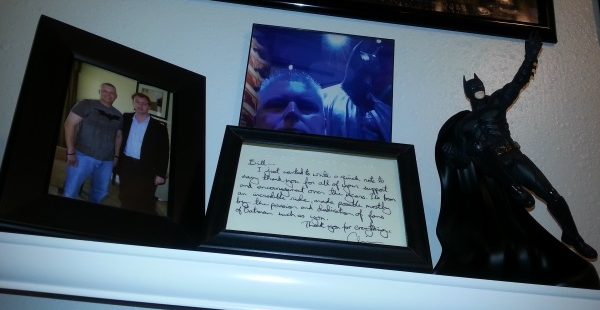 We know Catwoman, Riddler, and Penguin will be featured in The Batman, for sure. We’ve heard the Two-Face rumors as well. Who will actually be the “main” villain in the The Batman? One of the mentioned villains, more of an assemble, or someone else entirely? #BatmanOnFilmMailbag

JETT SAYS: I love this question!  One, I don’t think any of the villains announced (Riddler, Catwoman, Penguin, Falcone) or rumored (Two-Face) will be the “main villain” of THE BATMAN.  I believe that with this film being a mystery/detective first and foremost, the true villain might not be revealed until the end of the movie.  Maybe it’s a classic Batman rogue, or maybe it’s a new character created for THE BATMAN.

Are there other villains in THE BATMAN that haven’t been reported in the trades yet?

JETT SAYS: I believe so.

Is there a new sequel to BATMAN: ARKHAM ORIGINS coming out or not?

JETT SAYS: I hope so.  I think ORIGINS is vastly underrated.  But I really don’t know as Batman in games is definitely not my area of expertise.

Do you think Matt Reeves will have a “Punisher” version of Batman? Or the one with a moral code?

JETT SAYS: A “Punisher” version of Batman such as the one we got in BATMAN v SUPERMAN?  One that’s a total asshole?

I believe we’re going to get a Batman who is a HERO.

Hi Jett!  Greetings from Spain!  Do you think/know/suspect that Mr. Revees will give us a character that has never been on film before; like Doctor Strange or Red Hood?  Muchas gracias!

As I said earlier in this mailbag, I’d LOVE to see Hugo Strange in a Batman movie.  I do believe that we’ll see a Batman character in Matt Reeves’ THE BATMAN that we’ve never seen in a live-action Batman film before; though I don’t believe it’ll be The Red Hood, unless…Reeves plans to set up The Joker for a sequel because Jason Todd (who should’ve stayed dead in the comics) ain’t gonna be in this movie.

What does Batman do on New Year’s Eve?

JETT SAYS: He sends out the Bat-Bots ala KINGDOM COME and hangs with Selina Kyle in Wayne Manor.

I loved how at the beginning of BATMAN ’89 people thought of Batman as an urban legend. How would you feel if the Batsuit had the white lenses and Batman stalked the shadows so that’s all you could see, and the only time we would see the full Batsuit is in the Batcave.

JETT SAYS: I get what you’re saying David and it’s not a bad take, but I want to see full-on Batman in a Batman movie.  And I suspect that’s what the paying audience wants as well.

In regards to Batman sporting “white lenses” in a live-action Batman film, I’m totally against it.

As I’ve said many times, an actor’s eyes are a great tool and I do not want to take it away just because he is (Robert Pattinson and all previous Batmen/Batmans on film) playing Batman.

When will we see photos of the Batmobile and hear of the remaining cast playing the other characters?

JETT SAYS: Well, filming starts in basically 2 weeks (January 13th), so it’s very likely more casting announcements will be coming after the new year.  I’m not sure when we’ll see a publicity pic of the new Batmobile, but I do know there will be some on-location filming with it, so I suspect right before that takes place — though I’m not sure when that is happening.

As I said previously, I think there’s a good chance we’ll get an image of Robert Pattinson in the suit as early as January…maybe even to kick off filming?

With all of the experimental projects happening like “Crisis on Infinite Earths” and solo R-rated villain films, do you feel that we are now in a time where anything is possible? And if so, what project would you like to see made that previously would not have been likely?

JETT SAYS: Yeah, I think anything comic book-wise on film or television is possible nowadays.  As I’ve said here recently, I’d LOVE it if WB/DC would do a live-action adaption of KINGDOM COME on HBO ala WATCHMEN (which was brilliant).

Is there any concern that they are trying to fit too much into THE BATMAN all at once?

JETT SAYS: Nope, not at all.  Most of the villain roles — and I assume you’re referring to the news that THE BATMAN will have multiple villains — will be small, almost cameo-ish, if you will.  A wise man (Christopher Nolan) once said don’t hold anything back for a sequel — make the film you want to make and what comes next will take care of itself.

Hi Jett, I have a question. Which 2020 movies are you most looking forward to watching?

What is the deal with Colin Farrell? He has yet to get the MR casting tweet yet. Is he still in talks or have they moved on?

JETT SAYS: No idea.  The trades are still listing him as playing The Penguin in THE BATMAN, but Matt Reeves hasn’t tweeted anything about him having been cast as of yet.  We’ll see soon enough.

Happy holidays Jett, I wish joy to you and your family. I’m deeply sorry for bringing THAT movie up again, but have you read the original script of JUSTICE LEAGUE? Are all these things that Snyder teases fans with actually included in the movie or is he posting this stuff knowing that his version of the movie is (most likely despite what fans say) never going to be released anyway?

JETT SAYS: I know A LOT of what was in THAT version of the film, though I didn’t read the script.  I’ll put it this way: The images you see show up online were filmed, yes.  Are they finished (i.e. special effects, sound, music, etc.)?  No.  Will it be finished and officially released by WB?  I highly doubt it and if so, not anytime soon.

This may be hard for some people to believe, but I couldn’t care less if it’s released or not.  In fact, there’s part of me that wishes WB would do it just for everyone to see why WB made the changes they did and rewrote and reshot a good chunk of the movie.  My issue is the obnoxiousness of the “hashtag mob.”  When you make it part of your “movement” to harass the studio with phone calls and via social media, and you call for people (Henry Cavill, for example) to get spammed on their Instagram or Twitter, that’s just f*cking ridiculous.  No one behaves that way in the real world, but the anonymity of the internet brings out the “tough guys.”  I know there are many good people in that movement, but sadly, the ones who scream the loudest and act in the most despicable have come to represent all of them.

Is their one thing, in particular, you are looking forward to seeing from the new Batman Film coming up in 2021? Hoping to get more news and images next year! Happy New Year 2020 to everyone!

JETT SAYS: First and foremost, I’m excited to see Pattinson in the new Batsuit and the film’s logo.  Both will tell us a lot about the tone of THE BATMAN.