SYNOPSIS: The Bat. The Caped Crusader. The Dark Knight. The World’s Greatest Detective. Whatever you call him, Bruce “The Batman” Wayne remains one of the most iconic comic book characters of all time. And to mark Batman’s 80th anniversary, this volume encapsulates the most memorable moments that have left fans stunned, in awe, or heartbroken since his inception. 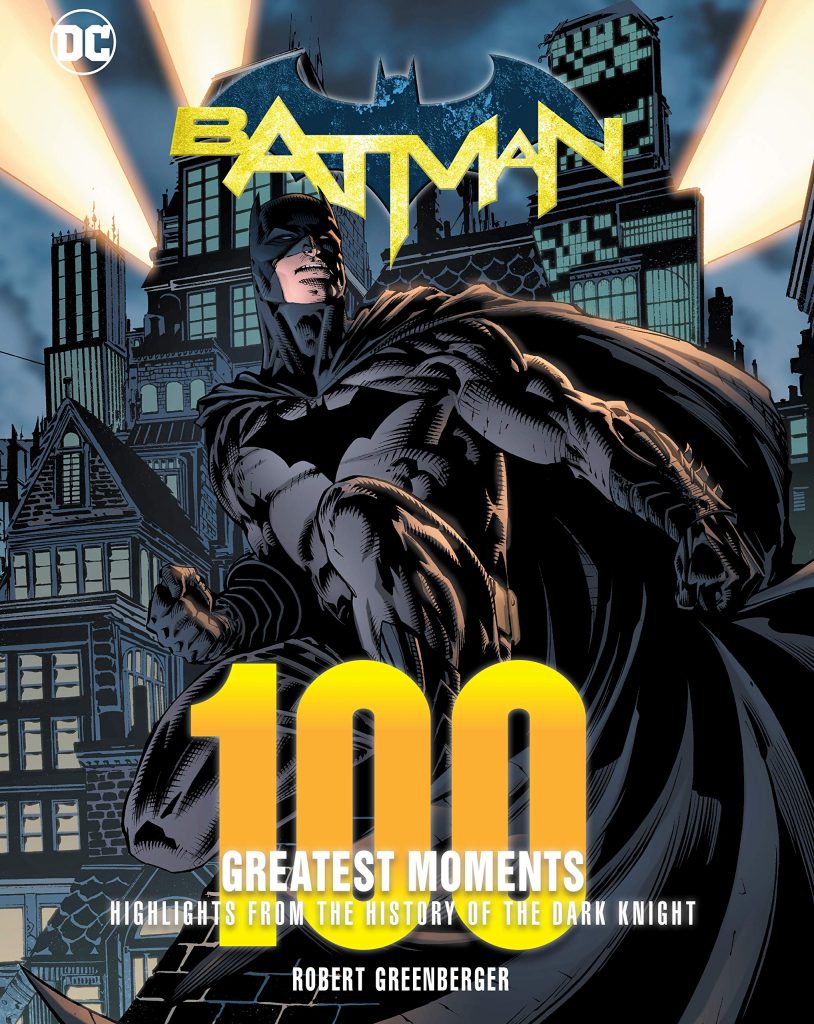 Lest we forget, Batman began (pun intended) in the comics.  We tend to look past it nowadays due to the fact that The Dark Knight is immensely popular in multiple mediums.

Many people were introduced to the character via movies, animation, and video games, and consider themselves a Batman fan and that’s perfectly OK.  More on that in a bit.

But yeah, it was comic books that begat Batman and the comics are indeed the focus of author Robert Greenberger’s BATMAN: 100 GREATEST MOMENTS: HIGHLIGHTS FROM THE HISTORY OF THE DARK KNIGHT.

(Full Disclosure: BOF did not receive a reviewing copy of this book as I actually received it as a Xmas gift — but it’s so good, I’m reviewing it anyway and spreading the word!)

There are many books that detail Batman’s history, so I can see how many folks wouldn’t want to spend the money on a book that might be redundant.  However, the way this book is set up — with 6 chapters and 100 “subchapters,” if you will — it comes off as a very detailed version of Batman’s greatest comic book hits.  The chapters are titled as follows:

Do the math, so to speak.

And I’ve got to say, the OUT OF THIS WORLD chapter was, well, interesting to say the least!

Detailing Batman’s 80-year comic book history, from DETECTIVE COMICS #27 in 1939 through Tom King’s run on BATMAN — and just about everything along the way — most of Batman’s defining moments are detailed in both print and beautiful comic book art.

After taking the last week (Xmas Eve to New Year’s Day) to go through this book with a relatively fine-tooth comb, I say that BATMAN: 100 GREATEST MOMENTS: HIGHLIGHTS FROM THE HISTORY OF THE DARK KNIGHT is a must-own for all Batman fans and collectors.  Hell, even I learned a thing or two about a character that I’ve loved now for 50-plus years!  And here’s my “more on that in a bit” that I promised…

This book would be a great gift or suggestion to purchase for those Batman fans who don’t read/never have read the comics.  You never know, maybe they’ll become a Batman comic book fan as well. – Bill “Jett” Ramey