This is going to be tough…so please bear with me.

My review of BATMAN #88 is the first one there’s been of the flagship Batman comic book since issue #86 about a month ago.  That is because my longtime BATMAN reviewer — the great John Bierly — passed away.

John has reviewed comics for BOF for years and has been breaking down BATMAN ever since Scott Snyder’s run began back in 2011, through the Tom King years, and, sadly ended with James Tynion IV’s first issue.

For the past week, I debated internally how BOF would handle reviewing BATMAN going forward.  I then reached out to several members of Team BOF and all said the same thing: “Bill, you need to be the one reviewing BATMAN right now.”

While I have reviewed many comic books for BOF over the years, I’ll be the first to admit that it’s not my forte.  An opinion piece?  Hell, I’ll knock that out of the park.  But as far as comic book reviews, well, I’m certainly no John Bierly.

Regardless, here I am reviewing BATMAN for BOF.

In honor of John, here we go…

SYNOPSIS: The conspiracy that will rock Batman’s world continues to unfold as The Dark Knight travels to Arkham Asylum to get answers from The Penguin! What dark secret does he share with The Joker, the Riddler, and…Catwoman? Plus, the plague of assassins descending upon Gotham City in its weakest moments continues! Will this be the moment when Deathstroke finally takes down Batman?! 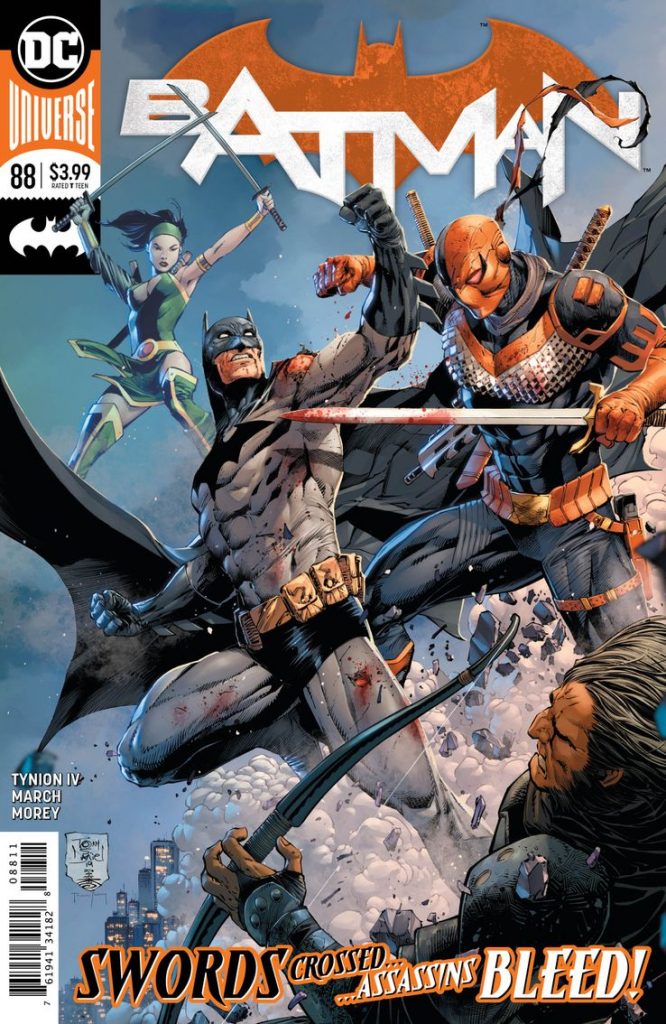 While I have read the previous two issues (#86 and #87), I’ll admit that I’m not really sure what the hell is going on.

There are a bunch of assassins in Gotham — including Deathstroke — and Batman has been taking them down one by one.  The Penguin seems to be the one who put this plan involving all these hired killers together…unless he isn’t.  And then there’s a really weird, emaciated, crackhead-looking Riddler involved as well.

As I previously mentioned, Batman’s been hunting down all these hitmen (and hitwomen) who have invaded Gotham with the help of Lucius Fox and Catwoman…but things don’t seem to be going all that well for The Dark Knight.

Speaking of Catwoman, Selina’s hiding something — from the readers as well as Batman.  It appears that she was involved in some sort of, well, something nefarious years ago with the other Batman villains (namely The Penguin and The Riddler) and the arrival of this “The Designer” person has got her freaking out.

Oh yeah, there was someone else involved in whatever scheme along with Catwoman, The Penguin, and The Ridder, The Joker — who has apparently been dead and buried for some time.

Regardless, Selina tries to tell Batman about whatever it from her past before he finds out elsewhere.  After everything they have been through, will Batman again think of her as nothing but a villain if and when he discovers Selina’s secret?  But she’s having sort of a difficult time contacting Batman for a number of reasons.  When you read this issue, you’ll see for yourself why.

In the end, an unexpected ally comes to Selina’s aid and we find out just who The Designer’s target actually is.

Even though BATMAN #88 and the previous two issues have been a bit of a jumbled mess, maybe that’s exactly what Tynion planned.  Lots of questions and mysteries need to be answered and I’m looking forward to seeing how this all plays out.