OFFICIAL SYNOPSIS: You ever hear the one about the cop, the songbird, the psycho and the mafia princess? BIRDS OF PREY (And the Fantabulous Emancipation of One Harley Quinn) is a twisted tale told by Harley herself, as only Harley can tell it. When Gotham’s most nefariously narcissistic villain, Roman Sionis, and his zealous right-hand, Zsasz, put a target on a young girl named Cass, the city is turned upside down looking for her. Harley, Huntress, Black Canary and Renee Montoya’s paths collide, and the unlikely foursome have no choice but to team up to take Roman down. 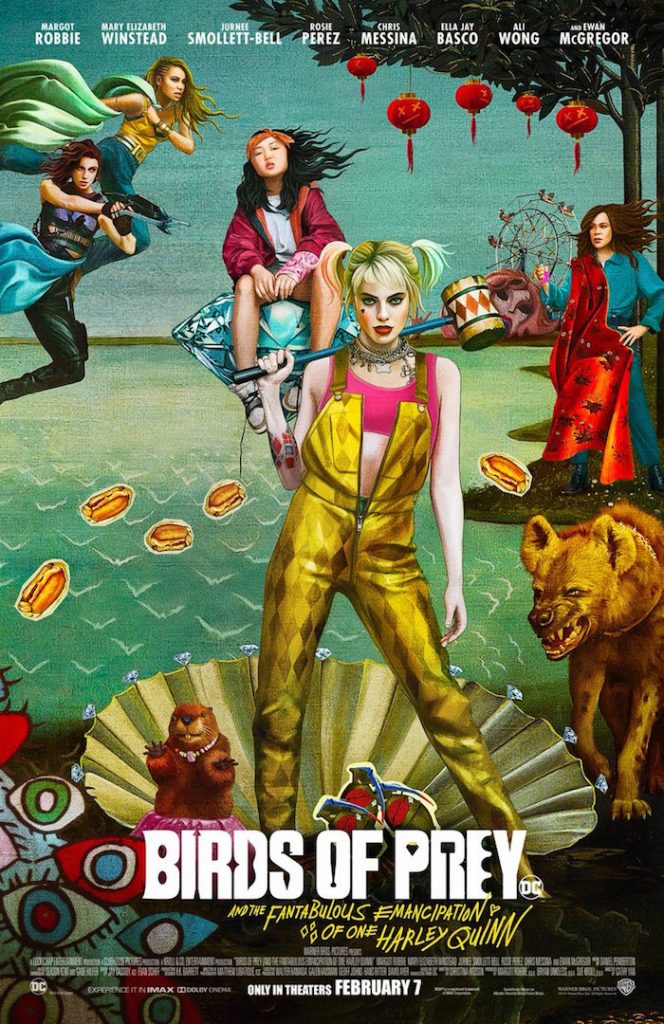 BIRDS OF PREY (And the Fantabulous Emancipation of One Harley Quinn) is kinda a spawn of, and a sorta a “sequel” (if you squint your eyes really, really hard) to, 2016’s SUICIDE SQUAD.  The main character is Margot Robbie’s Harley Quinn — who was prominently featured in SS — and she was “fantabulously emancipated” at some point after the events of that movie.  With all that said, this film really doesn’t have anything to do with SS as it cherry-picks only what it needs — Robbie’s Harley — to suit the movie’s narrative.

Look, it’s no secret that Warner Bros. is going a different direction with DC on film — essentially scrapping the “shared DC on film universe” thing and focusing on “filmmaker-driven” solo films that are their “own creative entity.”

And director Cathy Yan’s BOP (which was written by Christina Hodson and produced by Ms. Robbie) is definitely its own creative entity.

BOP certainly has a unique and different vibe compared to other DC films and other comic book movies in general which is quite refreshing.  One might expect it to follow a formulaic narrative and serve as an origin film for the team, but it doesn’t.  You get flashback scenes that introduce the audience to the characters, but other than that, the film’s story hits the ground running.  Additionally, there are informative animations and Harley’s narration which helps move the plot along.

RELATED: WB is Right to be “Less Focused” on the Shared Universe Thing by Bill “Jett” Ramey

Oh yeah, it being funny as hell — laugh out loud funny at times — adds to its comic book movie uniqueness.

Here’s the plot in a nutshell: The Joker and Harley have broken up and she eventually is taken down/captured by Gotham City crime boss Roman Sionis (Ewan McGregor who gives a fantastic performance), otherwise known as “Black Mask.”  To keep Black Mask from killing her, Harley makes a deal with him and promises to steal a diamond for him that’s needed for some diabolical reason.  The problem is that said diamond is in the possession of young girl/foster child Cassandra Cain (Ella Jay Basco) and every bad guy wanting the diamond is after her.

The other members of the BOP consist of GCPD’s Renee Montoya (Rosie Perez), the vigilante The Huntress (Mary Elizabeth Winstead), and Black Mask’s singer/drive Diana Lance/Black Canary (Jurnee Smollett-Bell).  All have their reasons for going after Sionis which leads to the group reluctantly teaming-up.

Even though BOP is a team-up movie, it’s really more of a Harley Quinn flick since HQ is front and center and the team doesn’t come together until the latter part of the film.  It’s not a knock on the movie at all because I suspect everyone going in to see expects Harley to be spotlighted and the star of the show.  However, the downside to that is that the other members of the BOP don’t get the focus they might deserve.

Another positive for BOP is the action/fight scenes.  They have a bit of a “John Wick vibe” which I guess shouldn’t be surprising since JOHN WICK director Chad Stahelski worked on the reshoots (which were meant to punch up the action a bit).

The bad?  There really isn’t any.  Some characters could’ve been a bit more fleshed-out/given more screentime and it’s certainly not deep, but those are really insignificant overall.

BIRDS OF PREY is a fun and very funny movie that feels like the entire cast was having, well, lots of fun making it.  Another winner for DC Comics on film and it certainly appears that the DC movie ship has been righted after the BvS/JL debacle.