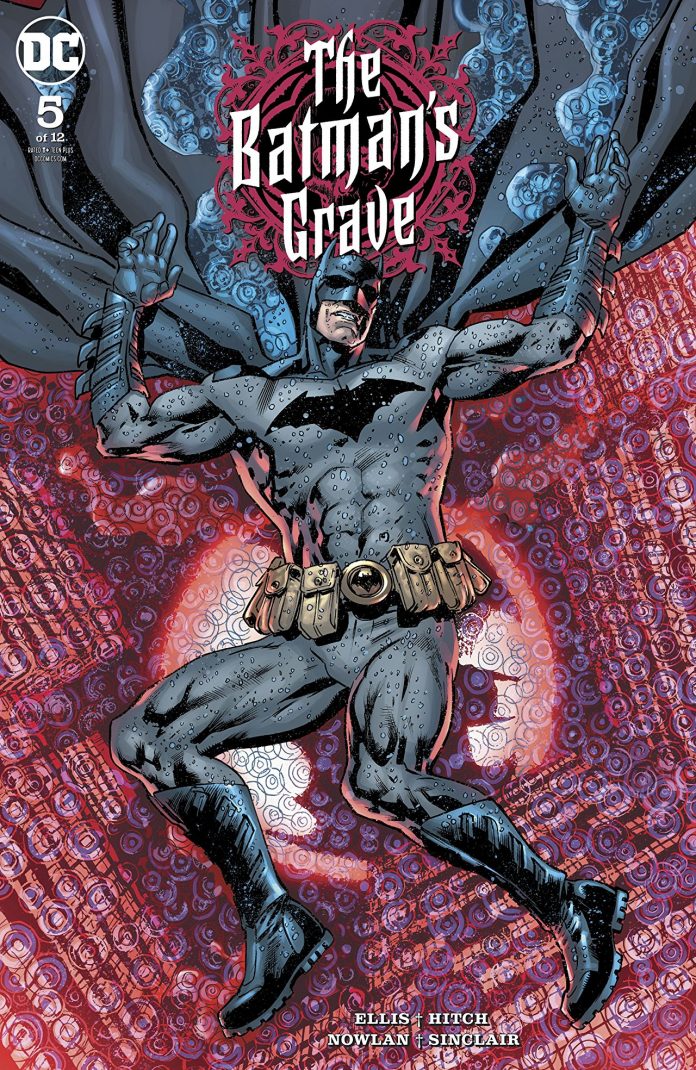 SYNOPSIS: The Batman is summoned to Arkham Asylum, where he is presented with parts of a deadly puzzle he couldn’t see assembling all around him. And he may not make it out alive.

The relationship dynamic shifts this issue from Bruce and Alfred to Batman and Gordon. For once, Gordon feels like he’s a step ahead of the Dark Knight Detective and he’s going to revel in that accomplishment for as long as he can, telling his officers to light the Bat-Signal and let Batman know to meet him at Arkham Asylum.

For the first time in a while, I stepped outside myself and questioned the need for a Bat-Signal in this digital age, especially in a series that deals with some cutting edge technology. Then I remembered that it’s not just a “beeper” for Batman, but something to scare criminals as well, serving as a reminder to everyone that he’s out there as the Gordon depicted in The Dark Knight would say.

It’s funny that I had that specific thought as pages later Gordon took umbrage with The Batman over not having his number and having to rely on shining a light and scaring a lot of the populace to get his attention. Ellis certainly likes to call out Batman’s modus operandi in this series and takes one more dig when Batman gets shot in the back later. When finding out Batman’s cape is bulletproof, Gordon asks if he made it or bought it as that is certainly something he and his officers could use. Batman gives a reply that’s left up to the reader to decide if he’s being honest or joking. There’s a lot of snide deconstruction going on in this series and I’m curious where all this is going. We’ve had several remarks about how Batman could share his equipment and tech with the GCPD and the reasons why he hasn’t. Is Ellis pointing it out for the skeptics and naysayers only to give reasons why Batman operates the way he does or is he building it up to tear it down by the conclusion?  How close to The Batman’s Grave will Bruce get and will it change how he does things in Gotham forever?

Before we get to that endpoint, however, we have a meetup at Arkham Asylum. As depicted by Hitch and Nowlan, it’s a majestic building that gets more cracked and dilapidated the further you get into it. Its grand entrance has seen better days, with various chips and fractures in the walls and floors, barely masking the suffering that lies ahead. The deeper Batman goes, the more tormented the patients he finds. One is naked and cowering against a wall, ignored by the warden whose ego wants the greater challenge of unwrapping the Dark Knight’s mind, another has his hands wrapped in medical tape as if they were mittens, soaked with blood from clapping his hands over, and over, and over…

I really have to stop right here and sing the praises of colorist Alex Sinclair. From the start of this issue, he makes the team of Hitch and Nowlan shine with his palette! From the stained walls behind Gordon, the glare in the lenses of his glasses, the luminescence of the Batsignal, and the warm glow as one enters Arkham from the stormy night, Sinclair brings the art to life and places you in the environments depicted, making them feel tactile and grounded.

One aspect that I found curious about the coloring was Gordon’s choice of outfit. Wearing a green suit and purple tie makes him an inverse of Joker’s standard style. Are they hinting that something is amiss with Gotham’s top cop or is it alluding to the fact that Gordon is on the opposite end of the spectrum compared to The Joker?  Or maybe I am simply reading too much into this, looking for clues and hidden meanings where there are none?

Jeremiah Arkham makes an appearance this go-round, echoing his debut in Batman: Shadow of The Bat, probing at the Caped Crusader, letting him know he has a special room reserved just for him on the day he finally accepts psychiatric help. Batman brushes him off, of course, seeing only the logic of what he does in his attempt to wage his crusade against crime. Gordon’s provoking of Jeremiah by calling him “Jerry” only made me love the Commissioner more, doing his part to take Arkham’s holier-than-thou attitude down a notch. Lots of people are trying to push buttons in this issue and through it all Batman just keeps moving, his eyes on the prize, which in this instance are getting to the bottom of this “Scorn Army” and interrogating Flamingo.

Said interrogation doesn’t go as planned, resulting in the aforementioned bullet to Batman’s back. While the first strike has caught the Dark Knight unawares, the speed at which he recovers and lands a counterstrike is expertly depicted by Hitch as time freezes between panels. Batman is so lightning quick that Gordon moves in slow motion by comparison as he tries to draw his gun and fire at the perpetrator.

Things escalate quickly here as the trap is sprung. This gives Ellis a chance to showcase Batman’s “No killing” rule while at the same time letting Hitch show off why a man with the physical prowess of Batman doesn’t need to. Once again, Hitch makes the fight scenes in this book look like they hurt. They may be non-lethal, but with objects smashed and holes made in the walls, there are some long term hospital stays in the future for those The Batman goes up against.

As the Scorn Army’s objective gets slightly more clear, Ellis once again leaves things on a cliffhanger for The World’s Greatest Detective, leaving me disappointed that I have to wait another month for the story to continue, while at the same time completely enthralled with the issue that I just read. The scope of this outing may seem small, but I felt like I was reading something that belonged on the big screen. The art team crams in so many details to add verisimilitude to the environment and Ellis’ story is suitably noirish, highlighting the detective aspects in Batman’s adventures. We’re almost at the halfway point in this series and I get the feeling we’re due for another incredible fight issue next month! I’m excited to see how The Dark Knight gets out of this predicament! – Javier E. Trujillo