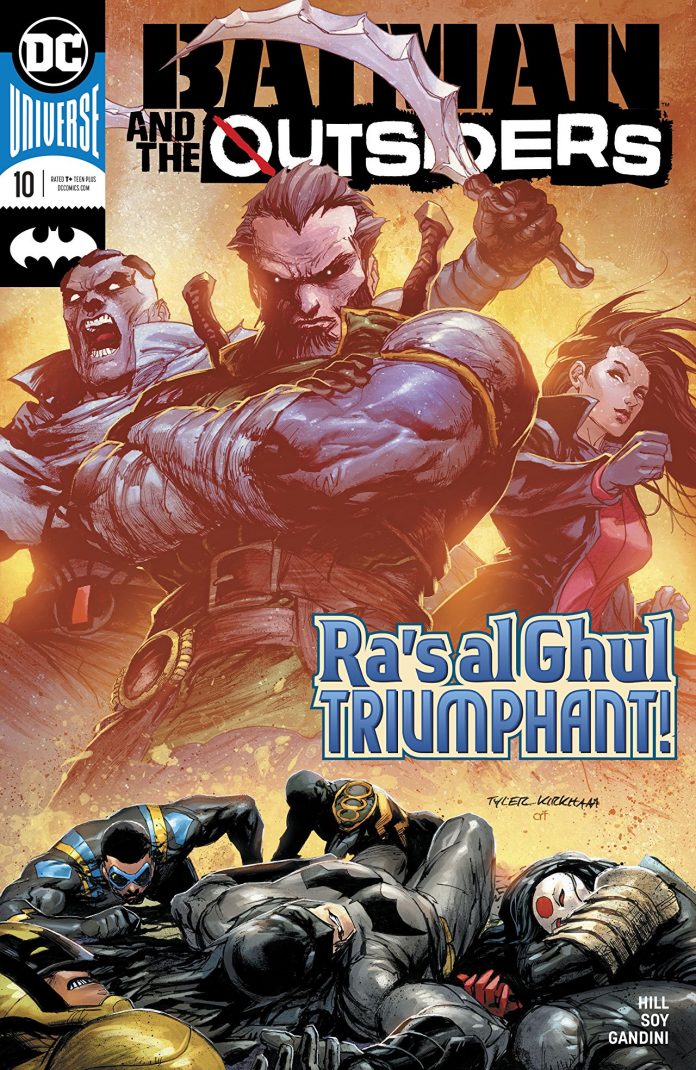 SYNOPSIS: When Batman recruited Black Lightning to join the Outsiders, he warned him of the dark world he was entering. Black Lightning shrugged it off, but now that Ra’s al Ghul has gone after him directly, the darkness Batman warned of has enveloped him. Will the Outsiders be able to free him from it?

If you’ve read my reviews before, you are aware that Batman and the Outsiders is a book about relationships above all else. It is the most consistent theme and enjoyable element of the book so far. In a medium like comics that can be a great thing, but it can make it difficult for readers to stay interested. When dealing with this market, there can be a certain expectation of kinetic movement on the page.

To be completely honest, I enjoy the pacing of the book. If people don’t like the characters, or how they interact, it doesn’t matter how much action is around, people will tune it out. However, every month I have said that the book is building to a great climax with all of the players finally coming together. I still believe that to be true, especially after this issue, but I can understand if others are frustrated waiting on it.

In this issue, it ends with all of the Outsiders (minus Batman) together, in the same place, for the first time in months. That combined with the fact that the series is approaching its first anniversary alludes to everything coming together in the next two issues. To get to that last scene the book does more character moments. Black Lightning working with Lady Shiva, the other Outsiders coming together to find him, and the quick (but well done) action when Kaliber shows up.

Batman is finally having a conversation with Sofia (the catalyst for everything) and she asks him, “can you make me like you?” With his back to her, his head down and in the shadows, his answer is perfect Batman, “like me? Never. I’m not that cruel.” Those seven words in the context of that conversation are able to express what Batman is. Everyone around him sees him as this symbol to strive for, but he believes his being is a horrific occurrence that no one deserves.

This run has been riddled with instances of character moments like that. It makes me believe that sticking with the title will be worth the payoff. Slow burns are not for everyone, especially if you don’t know if the ending will deliver, but when that burn is built off of making the characters relatable it has a great shot at surprising.

If you’ve stuck around this long, enjoy the ride a little more. – E. Chad Metz