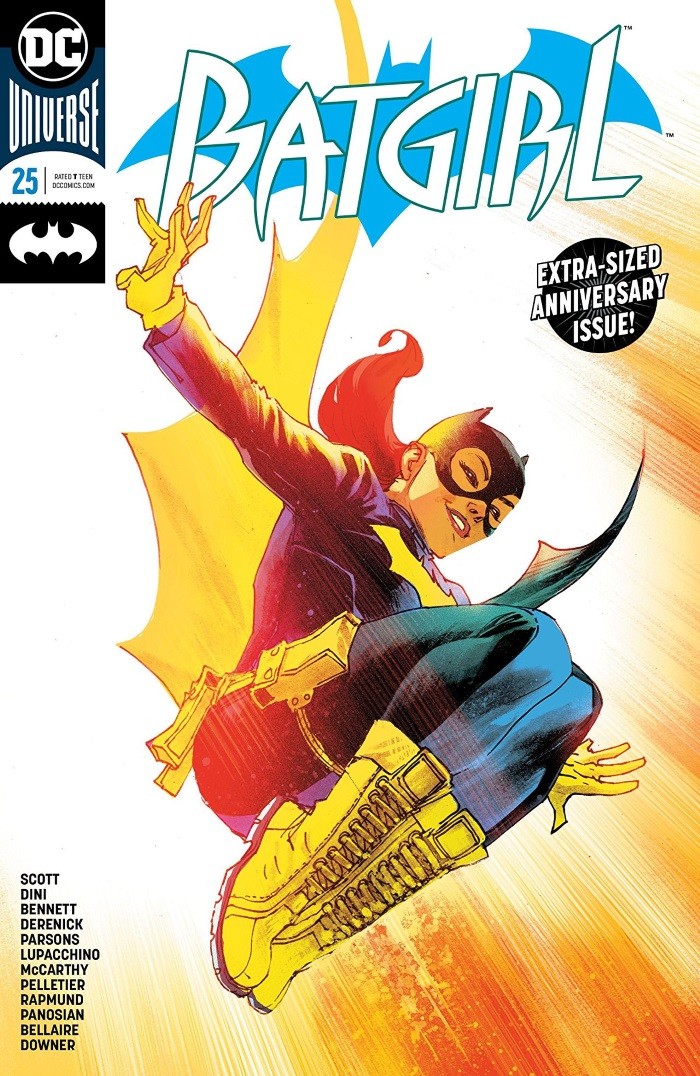 SYNOPSIS: On her return to Gotham City, family matters force Barbara to confront her complicated relationship with Dick Grayson. But does Dick have time for a heart-to-heart while subbing as Batman when Bruce Wayne is out of action?

First off, let’s all take a moment to soak in that gorgeous cover by my man, Rafael Albuquerque. Also check out the photo-realistic variant by Joshua Middleton.

The first of four stories in this issue comes from writer Mairghread Scott and penciller Tom Derenick, and finds Barbara’s grappling with her feelings regarding her value as a crimefighter. Overlooking the funeral of an everyday hero whom she helped save in the past, Babs is feeling very low and ponders whether the fight is even worth it when the losses just keep piling up. A conversation with the deceased man’s mother helps her see a different perspective on the situation. Derenick’s art is very ’90s, but he lays out some dynamic action where he can and conveys the emotions effectively.

The second part of this issue sees writer Marguerite Bennett and Artist Dan Panosian continuing from the first story, in a one-act short with Barbara joining Dick Grayson for a hotel rendezvous to further discuss her thoughts after the preceding scenario. It’s introspective and heady while also being sexy, playful and sweet. The artwork from Panosian with colorist Jordie Bellaire is my favorite in this issue; a little cartoony with worthwhile attention paid to the details, and a nice, warm color palette. I’d like to see more of them in this series, perhaps with a chance to handle some action.

Part three comes from writer Mairghread Scott and penciller Paul Pelletier and provides a setup for the upcoming story arc. Batgirl investigates the murder of a wealthy artist couple in the latest of a string of newly gruesome crimes the by villain Grotesque, whom Barbara first encountered as a meta-human burglar during Gail Simone’s New 52 run. The action is accompanied by Babs’s inner monologue, giving the scene a noir detective feel. It’s darker stuff than previous stories by Hope Larson, Cameron Stewart and Brendan Fletcher, and seems less focused on Barbara’s life as a modern millennial. Whether that’s a good or bad thing is completely up to the reader. I’m intrigued to see where this goes, and I hope we also get to check in on Babs’s gal pals Frankie and Alysia. (Note: I haven’t read the past couple of arcs so hopefully they’re not dead!)

The fourth and final story comes from legendary writer Paul Dini with penciller Emanuela Lupacchino.  It’s a fun, breezy tale with Batgirl out to foil a heist engineered by former Mad Hatter associate March Harriet (yuk yuk!). Most of the page count here is filled by the villainess recounting her origin. Barbara uses this time and new information to figure out Harriet’s real plot, while also finding some sympathy for her adversary. Lupacchino’s artwork is just cute and lively enough to fit the tone of the story.

Overall, I’m pleased with the amount and variety of content we get here. I connect much more with the art than the writing in comics, and I’m not as drawn to the art here as I was to the work of Babs Tarr, Rafael Albuquerque or Chris Wildgoose. However, I enjoyed the writing and am excited to continue following the ongoing adventures of the DIY detective, Batgirl! Most of all, I’m thrilled for the opportunity to contribute to BOF, my most trusted and admired resource for all Bat-related news and think-pieces. – Rob Veatch

Rob Veatch III  lives in Seattle with his wonderful wife and a pretty dope collection of comic books and action figures. Passions include Batman (duh), Teenage Mutant Ninja Turtles, basketball, and bands existing on the fringes of heavy metal (see Deftones, Mastodon, Torche, Candiria, Pelican, The Dillinger Escape Plan). A native of Western Washington, he studied animation and illustration at The Evergreen State College, during which time he heard about a new Batman film in development under director Christopher Nolan. The search for more details led him to a little web page called Batman-On-Film. Fifteen years later, they’re still in love.