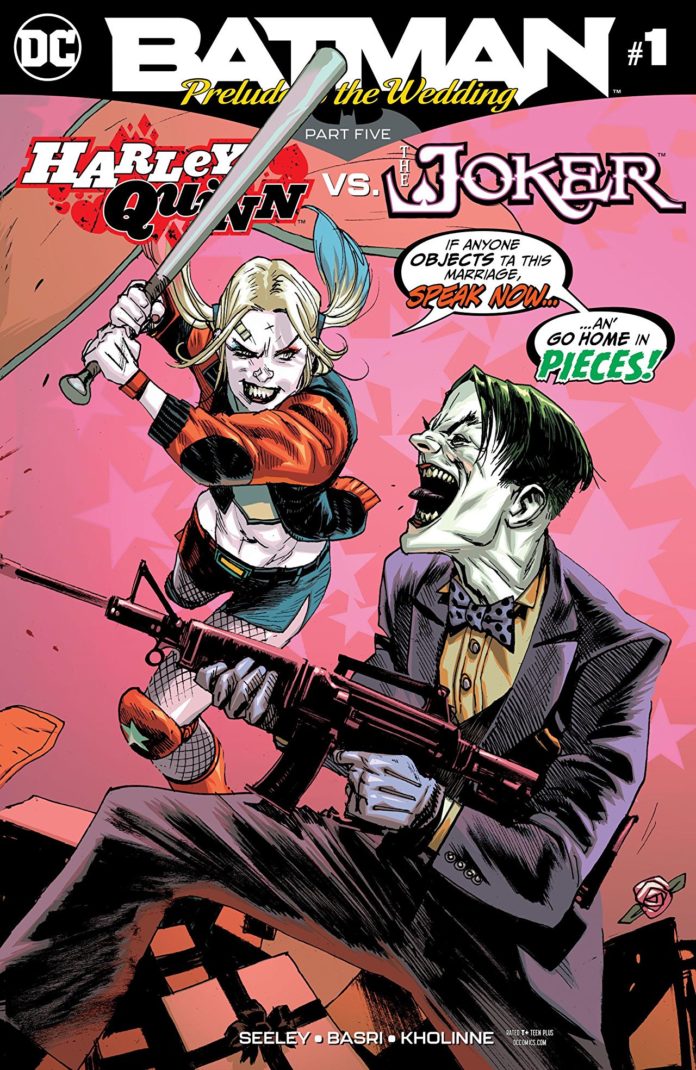 SYNOPSIS: Harley Quinn knows a thing or two about dysfunctional relationships. When she hears that her old flame is trying to get in the way of a happy new life for one of her best friends, the Maid of Mischief tracks The Joker down to give him a piece of her mind-and maybe a few blows from her hammer, too.

We are finally here.

To a pretty pointless build up.

I don’t know what it is. A Joker story really needs to be great. I will be super critical of a Joker story because it needs to kill.

It needs to make you think.

Make you not want to read anymore.

Make you want Batman to kill him.

To break his one rule.

Nothing that has transpired in this issue, this whole series to be honest, will make Batman 50 a better or more enjoyable book. I was good with the Joker just wanting to be invited to Batman’s wedding. Harley wanting to stop him from interrupting the Dark Knights nuptials just didn’t work. Because she wanted a fairy tale to come true?

What Tom King did in Batman 48 and 49 was perfect. It was disturbing and clever. It was the Joker. You see, The Joker has a voice and it is hard to tap into. Very few writers have got it right. He should be used sparingly. Because when you bring him out, he has to be let loose and do his thing. He shouldn’t be the supporting character.

Maybe they should have left the Joker out of this miniseries? He could have had his presence, but there is no need to give him a motivation for showing up to the wedding. He hates Batman, thats all that is needed. We get it.

Some high points? I loved Joker being in vat of old teeth. That was super creepy and random and I didn’t even need to know how he got there.

The visuals by Sami Basri was really clean and kinetic. I thought it was one of the better looking issues next to the work Travis Moore did on part 2 with Nightwing and Hush. Otto Schmidt finished off the epilogue, which made it feel like it was tacked on. It was only 2 pages…must have been waiting on the King script? Not sure. Thats why this feels rushed. Like they needed to get it out quickly, so they had more than one artist work on the entirety of it. The same thing is happening with Bendis’ THE MAN OF STEEL mini. I know it is a weekly, but King has known his endgame for a while. It makes it feel like a cash grab instead of wanting to tell a great story.

The Joker deserves a great story.

This will sound like an insult, and I don’t want it to. The whole confrontation felt like a bad adaptation of the animated series. Those episodes were great. Dini captured the insanity of the Joker and Harley Quinn dynamic perfectly. This felt like the Batman Adventures comic based on those episodes. And that comic was good.

I have to point out Seeley is a good writer, this may have just been a bad assignment. With bad timing.

I liked the wrap up of the issue, more for The Jokers chit chat with Harley about her death trap. I don’t need his motivations, but I like his psychoanalyzing Harley’s motivations. This was the most interesting part of the book. When the Joker sounds sane, as if he does understand whats going on. Then he segues into a song. Good spot to end.

If you have not read Batman 48 and 49, please do so. That is a great Joker story.

Let’s hope we don’t see the Joker for a while. At least till after the honeymoon. – Justin Kowalski

Could THE BATMAN Be More “Grounded” Than THE DARK KNIGHT TRILOGY?