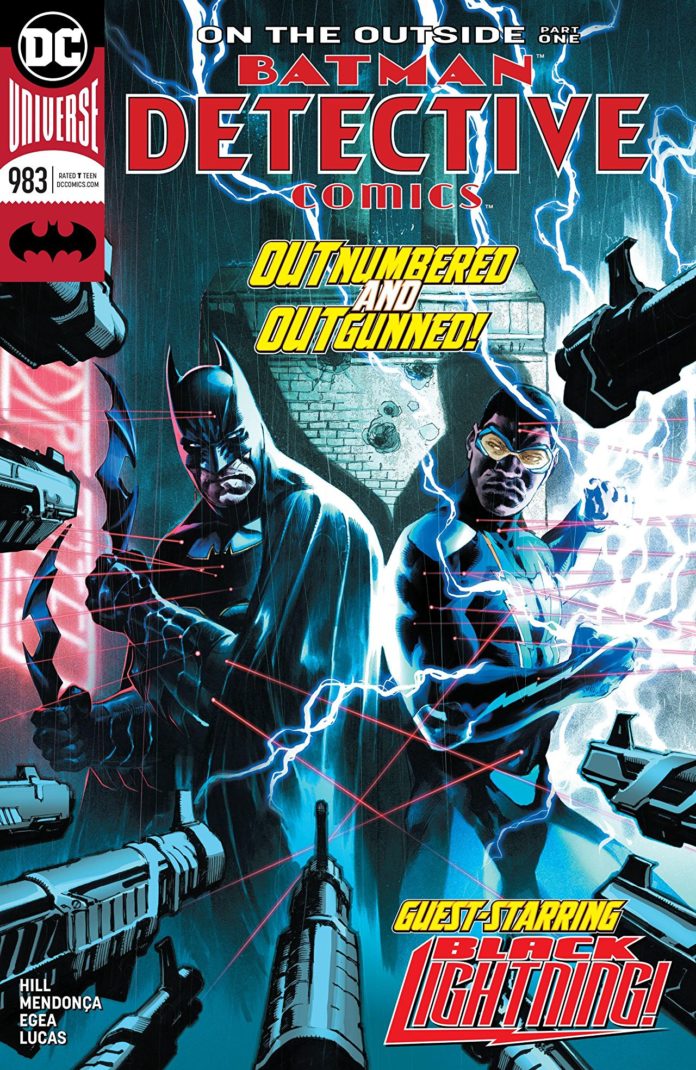 SYNOPSIS: “ON THE OUTSIDE” part one! Duke Thomas. Cassandra Cain. They and other young heroes don’t intend to stand down, no matter what Batman thinks is best. Who can Batman trust to guide them? They need a teacher…and Black Lightning fits the bill!

It’s hard to believe we are already two issues removed from James Tynion’s run in Detective Comics. In between, Michael Moreci delivered a wonderful one-shot in the previous issue, but now Bryan E. Hill has taken the reigns for a five-issue arc.  Hill takes the team aspect that Tynion gave us and builds upon it. With all of those now seemly working for Batman, Hill dares to ask: Do they make Batman weaker?

Bryan Hill grabbed my attention from page one. Not only was I getting The Dark Knight Returns vibes, it was like I was looking directly into modern-day fandom.  Hill keeps the team aspect of Detective intact with a few changes. The Signal and Black Lightning are looking to be strong players in the new arc. Hill weaves us through an action-packed tale with fine character moments and a strong setup. Alfred/Signal and Batman’s recruitment of Black Lightning stand out due to both the superb writing and artwork. Hill writes a great villain; this new character is toying with Batman, trying to manipulate The Dark Knight, trying to instill doubt-almost Hush like.  You will love the angle Hill takes making you question the Bat-Family and if they “water down the brand.”

Please join me in welcoming back artist Miguel Mendonca back to Gotham City. You can add Mendonca to the list of fine artists we have been lucky enough to have on the book since DC Rebirth. Mendonca delivers beautifully drawn action and splash pages. Nailing a Dark Knight Returns/Robocop media vibe.  Alfred and Duke share a tearjerker with only a few words, relying on the visuals to draw you in. Mendonca provides some of the finer “Batman in the shadows” moments you will see grace a comic book. Colorist Adriano Lucas nails the tone of this scene with the shadows, simple background, and use of red. We are talking Larry Fong/BvS/Batman in Luthor’s cell good.  What takes the cake is the car chase toward the end of the book. Batman disabling a speeding car from above and then taking down the armed thieves? Pure comic book perfection.

Bryan Hill really left me wanting more with his first issue.  This new, unnamed villain toying with Batman and the Bat-Family was a thrill ride from the get go.  I’m always down for a villain who tries to outsmart Batman. Sometimes, our comic book heroes rely on their brawn and might a bit too often. Hill seems to want to dig more into the psychological early on in his arc. I loved what Mendonca brought to this issue. Simple things like the Bat-signal shining bright on a gloomy night to Batman showering villains in a barrage of shuriken go a long way in my book.