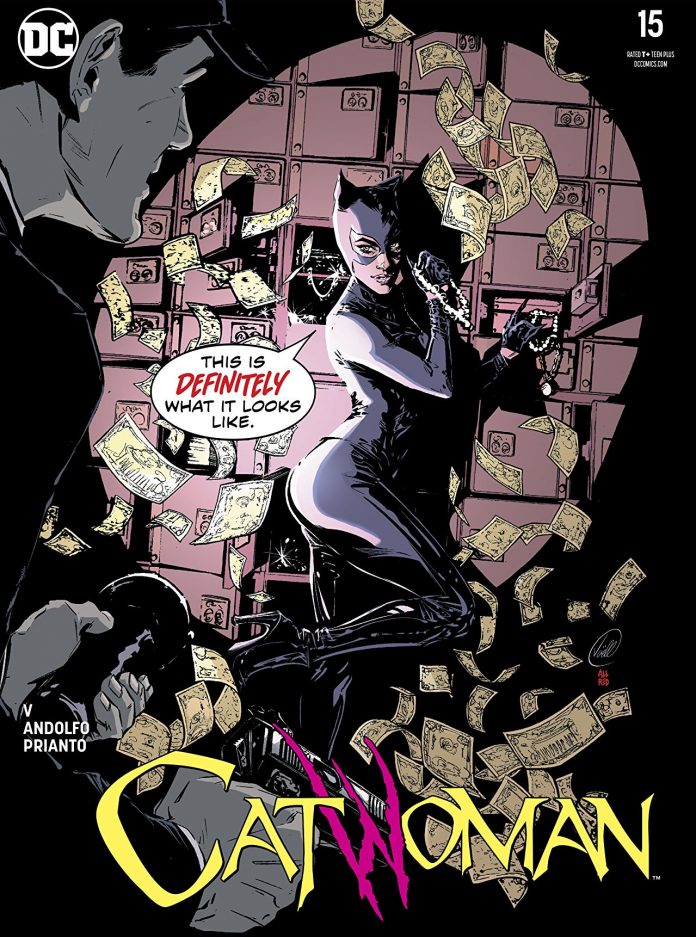 SYNOPSIS: After running a gauntlet of assassins to get her hands on the dossier detailing all the illegal activities of Villa Hermosa, Selina Kyle must go up against the big bosses of the criminal underworld. She must deal with their gun-toting mercenaries, yakuza hit women and the masked bounty hunter Lock-Up. All while still carrying a price on her head. Is there a way she can collect both big prizes herself and still walk away alive?

Selina has barely survived a perilous night of assassination attempts, but she’s retained control of the illicit financial cache and she’s bringing a fight to those who’ve tried to snuff her out.  A series of brawls leads her to The Emperor’s Jewel – a Villa Hermosa high-rise – where a group of hoity-toity criminal elites spend their days feasting on exotic and endangered animals.  A seat at the table costs five million.  Raina Creel is a member, but her seat has been ominously empty as of late.  Will Catwoman survive her risky incursion?

Writer Ram V, who brought us last month’s issue, ties up his arc in a rather acceptable, but paint-by-the-numbers, fashion.  With the exception of The Emperor’s Jewel and a peek at the other criminal families of Villa Hermosa (which aren’t all that interesting at the moment if I’m honest), not a great deal happens in this issue.  Catwoman suits up, beats up some people, smirks into the camera, and it’s off into the sunset we go.  It is a rather lackluster affair with not a lot to hold onto once the whole scenario draws to a close.

Also rejoining us this month is the art team from August.  Penciller Mirka Andolfo provides solid artwork.  A few of the panels seemed to lack focus, but on the whole, Andolfo’s strong style is very welcome any time Joëlle Jones is unable to step in.  Colors by Arif Prianto are robust and energetic, though he relies heavily on blue tones in this issue.  I felt like there was more variation last month, but I’m nitpicking at this point.  The art definitely wins over the storyline here.

Jones draws up the main cover this month, but it doesn’t resemble her usual highly-precise, almost surgical style – it looks a little messy.  BUT there’s an important reason why I bring up covers… Artgerm’s variant cover is a sight to behold.  Catwoman reclines against a brick building, licking the back of her hand, wrapped in black leather and white stitching… Fans of Michelle Pfeiffer’s Catwoman from Batman Returns will want to snag this one for sure, ‘cause it’s a beauty.  And from what I understand, it is the last variant cover Artgerm will be doing for Catwoman. – John Funderburg