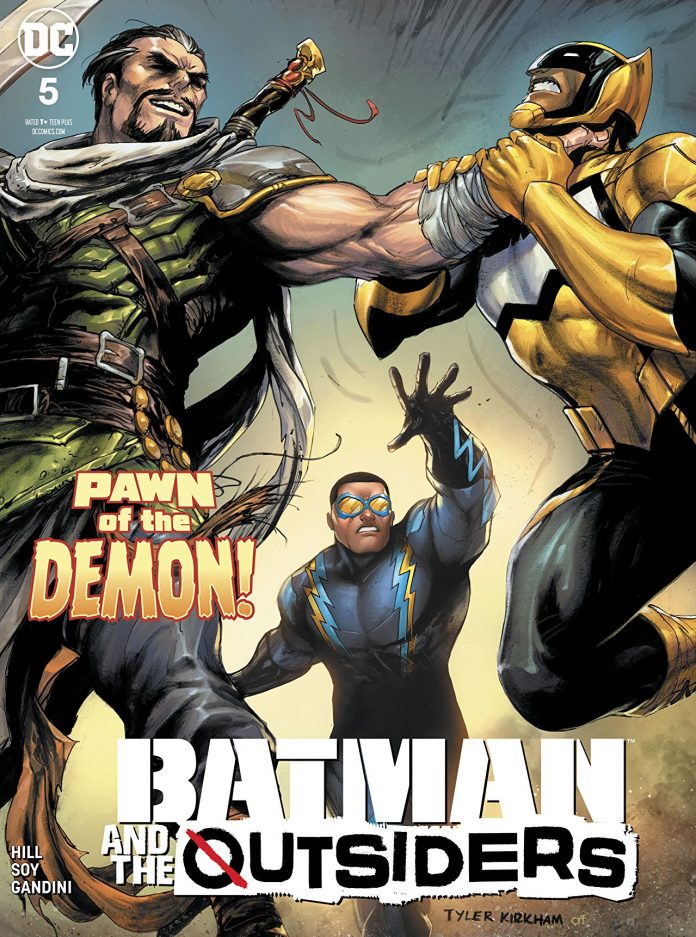 SYNOPSIS: The Outsiders must stop Ishmael if they hope to rescue Sofia and bring her back to Gotham City to meet with Batman. But vanquishing such a fearsome opponent will have dire consequences, especially for one member of the team…

This is the first issue of this run that Batman doesn’t show up at all, and you can feel it. And that’s a good thing.

The book has been telling us since the beginning that, while Batman will loom large, this is a book about the Outsiders, but I think it does have a primary focus: Black Lightning.

Writer Bryan Hill does a good job of centering this issue in particular on BL, but also explore and expand the dynamics of the team. Black Lightning shares almost every scene with Katana. The story has already established that those two have mutual respect and trust for one another, but this issue makes it clear that they are still learning each other. In a brief, but incredibly enlightening exchange, Katana explains her existence to BL by simply saying, “I am a weapon.” This is followed with the question of if Black Lightning is prepared to cross the line, it appears he knows if he is, but we are left to wonder. That has to be a plot thread that will be resolved before the end of this arc.

The only other Outsider that has a presence throughout the entire book is Kaliber. He is yet another character that doesn’t have the trust of the adults in the room (BL and Katana). Have to feel that because of his mysterious nature, are reverence for Batman, that we will find out all about this guy. This could be stretched beyond this arc, it probably shouldn’t be addressed until this arc is finished, but he has to lead to something.

The action is kinetic as always, and you can feel the anime vibe the book is going for. The way the story has been building to the team atoning for losing Sofia, that that confrontation felt like a let down at first. Sure she fights Katana while BL takes care of the red shirts, but she basically surrendered. Ending on that note would have felt supremely disappointing, but they gave us a curveball.

Ishmael shows up in Gotham to confront Signal and Orphan. Not for a fight, but to reveal a dirty secret of Batman. Knowing that we are dealing with Ra’s Al Ghul, this could all be a lie to further whatever goals he has this time. Even if that is the case, from the very beginning the book has shown how much character’s distrust Batman, particularly Black Lightning. Having “the secret” presented to the two characters that have the utmost trust in Batman is fitting. Whatever secret Ishmael has to share; it feels like an actual representation of BL’s distrust of Batman come to life.

Overall another solid issue. It feels like the best is yet to come for this book. – E. Chad Metz