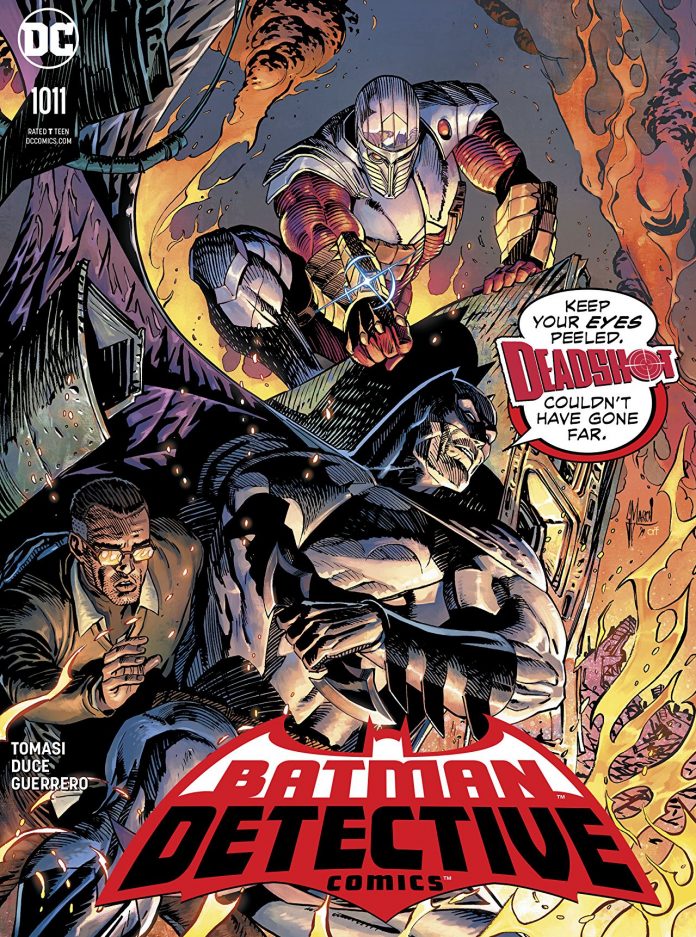 SYNOPSIS: In order to carry out his contract and get what he’s owed, Deadshot must kill Lucius Fox. Batman isn’t about to let that happen, but without the use of lethal force, does he stand a chance against Deadshot? Plus, Mr. Freeze sets the last piece of his “Year of the Villain” master plan in motion!

Tomasi’s last three issues of Detective Comics have been a bit different to say the least.  For years I’ve heard grumblings among fans that Batman has been too reliant on technology and gadgets.  I can’t tell you how many times I’ve heard that his utility belt is overused and he can’t possibly have something for every scenario. Well if you have one of those gripes these last three issues are for you.  This Batman vs. Deadshot tale has our hero out of his comfort zone and completely unprepared. All the while proving that Batman is still the best tactician in comics regardless of the situation.

Detective Comics #1011 really is a breath of fresh air not only for Bruce Wayne but the reader as well.  No skyscrapers, no cellular signals, no Batsuit, no problem.  One thing that doesn’t change is that Bruce Wayne knows how to pick the right sidekick(s) for the job. Clarence and Hiroshi are like the AARP versions of Dick Grayson, vibrant, full of energy and they love to talk. These two bring levity to the issue while simultaneously bringing out the softer side of Bruce Wayne.

While Batman is out of Gotham he is not entirely out of his element.  His ability to plan strategically is defined in this issue.  Using the assets around him to distract the villain to save the hostages and eventually emerge the victor.  From taking a mud bath like Arnold in Predator to coming up with an ingenious way of using an old crashed warplane, this is vintage Batman ingenuity.

Tomasi does two things brilliantly this issue. Delivering a heart-warming conclusion proving that Batman can smile and not look as ridiculous as Val Kilmer in Batman Forever and/or Ben Affleck in Justice League. A tremendously uplifting ending to a wonderful three-issue story, I’ve never been happier to see Batman delighted.  What I do appreciate most is how Tomasi literally takes the words right out of the readers’ mouth just as Batman finishes off Deadshot in the final battle mid monologue.  Thank you sir, you nailed it!

I only have two nitpicks this issue, first off we never find out who hired Deadshot to take out Bruce Wayne for whatever reason. That is an unsolved mystery for the secret files I suppose. My second problem with this book was actually a bit more glaring. Stranded on a “deserted island” where literally only two people have set foot since WW II. An entire plane full of people from Gotham City crash and witness a masked man with pointy ears save them and not one person even thinks to wonder if it’s the Batman?  It doesn’t even bug me that someone didn’t put the mystery together Colman Reese style, but come Gothamites you are slacking.

The artistic team of artist Christian Duce and colorist Luis Guerrero really shine this issue. The backgrounds in every one of Duce’s panels are so detailed. From the trees in the jungle to the moon in the sky, not one background is dull or boring. Batman’s final confrontation with Deadshot is something to witness. The action is fluid and easy to follow whether it’s Batman’s knuckles digging it to Deadshot’s cheekbone or Deadshot turning the tide on Batman and using jungle vines as a noose.  This is an old school battle of fisticuffs and may the best man win. There are two gorgeous panels with the moon in the background one of which just screams Batman ’89 and will no doubt bring a smile to your face.

It would be a shame to not mention the contribution Guerrero adds to the book. He really adds layers to Duce’s artwork. It’s the warm colors throughout the book that captivate your eye. The red of Deadshot’s uniform, the way light reflects off his armor, how the controls of the Batwing shine on Batman’s face in an almost neon fashion and the use of moonlight to accent a scene. I really picked up on how Guerrero uses color to signify motion, a quick strike of the first or a head turn looking for a target bold and bright, really standing out. His sense of color this issue will have flipping back and forth for things you missed.

While this story was more about the how and now but I can’t help and wonder about the who and the why.  I enjoyed this stranded Batman tale but I’m dying to know who set these events in motion. I wish we had some closure. In a way, the story is almost as vague at the Mr. Freeze tease at the end of every issue. While this arc has its faults the great moments really outshine the questionable. Bruce Wayne with Clarence and Hiroshi was a pleasant surprise I never knew I wanted. Not to mention seeing Batman prove that he is more than just gadgets and a utility belt is so gratifying. Even when he is not hiding in the shadows of skyscrapers and sirens he stands tall and prevails.  That is the Batman I know and love. He’s never out of a fight and always determined to do the right thing. – Peter Verra