SYNOPSIS: Theodore “Theo” Decker was 13 years old when his mother was killed in a bombing at the Metropolitan Museum of Art. The tragedy changes the course of his life, sending him on a stirring odyssey of grief and guilt, reinvention and redemption, and even love. Through it all, he holds on to one tangible piece of hope from that terrible day…a painting of a tiny bird chained to its perch. “The Goldfinch”. 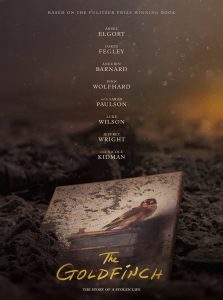 I’ll admit that I haven’t read The Goldfinch, the Pulitzer Prize-winning novel by Donna Tartt.

But the film adaptation stars Ansel Elgort of the Divergent series and Baby Driver fame, so I thought I’d give it a look-see.

The film turned out to be an endurance contest. At 2 ½ hours with only the last 40 minutes or so gaining momentum, I often found myself looking longingly at the EXIT sign.  I’m sure Warner Bros. was counting on the popularity of the novel, and, indeed, it should have been a better film.

The Goldfinch features a strong cast although they aren’t always used efficiently. Academy Award-winning cinematographer Roger Deakins gives us a visual gift with his presentation of the various settings and sometimes other-worldly effects. That is the film’s principal strength, and it’s a pity the rest of it doesn’t measure up.

The protagonist, Theo Decker, is portrayed as a child by Oakes Fegley and as an adult by Ansel Elgort. The young Fegley is much more effective than Elgort in the narrative. Elgort’s rather subdued portrayal does not make him a sympathetic character, and he needs to be so the audience can accept his flaws.

Like Oakes Fegley, another young actor, Finn Wolfhard of Stranger Things fame, acts circles around his adult version, played by Aneurin Barnard. The scenes featuring the two boys are by far the most effective and poignant in the film.

The story is told in flashback, alternating between Theo’s thirteen-year-old persona and his adult one. The transitions aren’t always smooth and often leave you feeling that something important has been left out.

In the narrative, thirteen-year-old Theo Decker loses his mother Audrey (Halley West) in a bombing at the Metropolitan Museum of Art where they have gone to see an exhibition of Dutch Masters. Her favorite painting is “The Goldfinch” by Carel Fabritius from 1654. He was a student of Rembrandt who died tragically in an accidental explosion — yes, really — and the painting was his last work. Theo lingers, looking at it, as his mother walks on. Afterward, Theo will discover the painting, which is quite small, has survived, and he takes it. He hides it and keeps it for the comfort and hope it has made him feel.

Theo’s attention had been captured by a young, red-haired girl accompanied by a much older man who was standing nearby. In the smoke-filled chaos after the bombs go off, he doesn’t see the girl or his mother, but the old man, Welton Blackwell (Robert Joy), although mortally wounded, gives Theo a ring and asks him to take it to Hobart & Blackwell. Theo will learn later that the girl is Blackwell’s niece, Pippa (Aimee Laurence), who lives with him due to her mother’s death. This film is filled with orphans. James Hobart, “Hobie”, is played by the amazing Jeffrey Wright. Theo’s fate becomes intertwined with theirs. In later scenes, the adult Pippa is played by Ashleigh Cummings.

Theo’s father, Larry (Luke Wilson), abandoned the family, so Theo has no place to go. He asks to be placed with the family of a school friend, Andy Barbour (Ryan Faust). The Barbours are quite wealthy, and, yes, the rich are different. Mrs. Barbour, however, becomes especially attached to young Theo. Nicole Kidman plays Mrs. Barbour as a detached, remote woman who seems damaged in some way. She wanders through her scenes like a ghost. Theo’s life also becomes entwined with the Barbours.

Unfortunately for Theo, his dad shows up unexpectedly. Larry is a failed actor who’s an alcoholic and a gambler. Mrs. Barbour reluctantly surrenders Theo to his dad. Larry and his girlfriend Xandra (Sarah Paulsen) take him to Las Vegas where he ultimately meets Boris, a neglected Ukranian boy who lives with his abusive father. Paulsen, as the tough, world-weary Xandra gives the best performance in the film.

I’ll leave finding out how Theo ends up leaving Las Vegas and returning to New York to you to discover because the film needs all the suspense it can get. The threads of Theo’s life are all tied up with the painting, and that’s the dynamic that drives the plot.

The Goldfinch embodies some seriously profound themes: the transcendence of art, the randomness of life events and the unexpected connections they create, love and loss, the perils of dishonesty, and, ultimately, redemption.

Unfortunately, the film does not measure up to the depth of its thematic content. That excruciatingly glacial beginning sets the wrong tone, and even though it eventually picks up, that doesn’t compensate for the lethargic beginning. It creates an apathy that keeps the audience from identifying with the characters and therein lies the problem: you just don’t much care what happens. – Jo Hyde

In BLACK PANTHER, THE DARK KNIGHT Finally Gets Its Oscar Nomination...