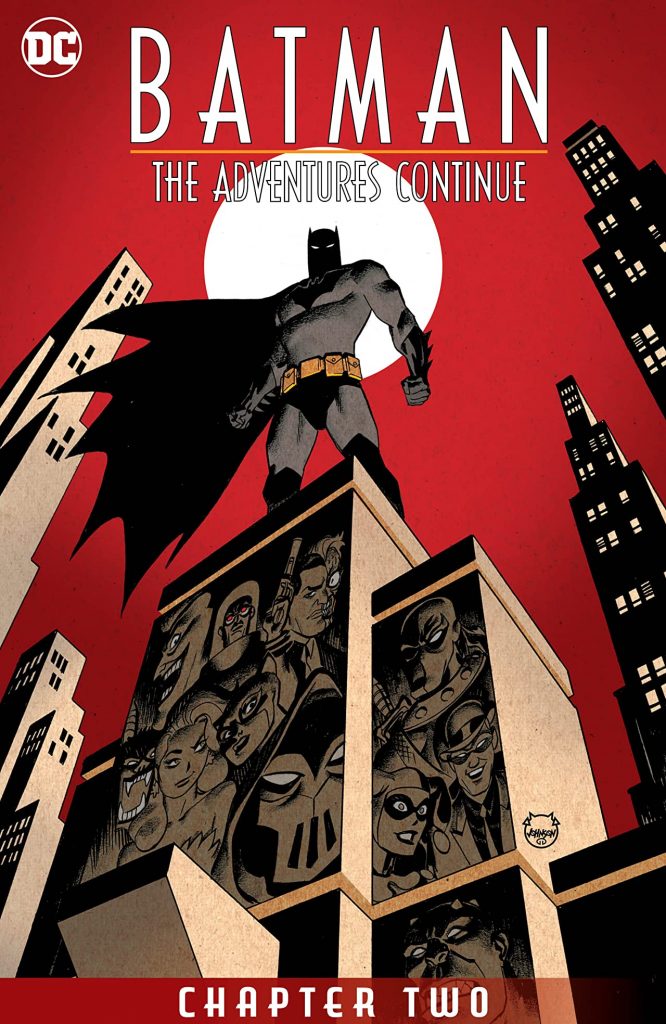 SYNOPSIS: Batman’s in the clutches of Lex Luthor and his powerful robot as the mad genius races to open the vault he stole from Wayne Industries and claim his prize! The Dark Knight will need to utilize experimental tech if he’s going to topple the billionaire before he leaves Gotham, but where is Superman and why can’t Batman get in touch with him?!

Picking up immediately where the debut issue’s cliffhanger left off, Batman is literally in the clutches of a power-suited Lex Luthor, with “maybe ten seconds of consciousness left.” However, if you know Batman, you know he’s already three moves ahead.

If you’ve read Bill’s (Jett, BOF EIC) review of issue #1, you’re aware part one feels like a continuation of the “World’s Finest” crossover from the respective prior Superman and Batman animated series, and this continues the world building between the two as seen in those seasons. Bringing in the deactivated head of Brainiac as the MacGuffin that brought Lex to Gotham not only makes sense, but possibly hints at the continuity from the animated movie, Superman: Brainiac Attacks. It also makes this comic feel like part of a bigger universe, not confined to the dark alleys of Gotham and her denizens. You can see this leading to Justice League someday.

Veteran Ty Templeton handles the art chores with ease, making it easy for the reader to hear the actor’s voices in their heads as they read the story. The linework is simple and concise, looking at the model for the template established in The New Batman Adventures. Colorist Monica Kubina makes the art pop, maintaining the red skies of Gotham and adding grey shading to Batman’s costume, highlighting the definition in his cape and cowl.

As stated by DC, this series is part of an initiative to introduce new characters into DC Direct’s Batman: The Animated Series line of toys and we see the first debut here-an armored Batman very reminiscent of his look in “The Dark Knight Falls” when he confronts Superman. Rather than retread on ground covered elsewhere, Burnett and Dini have cooked up a different reason for The Caped Crusader to armor up, one that makes sense for this story (if you disregard the jet boots).

The plot coalesces well, though simple it may be. I feel the need to go back and compare it to the prior iterations of comics based in this universe to see how it holds up. Billed as a six-issue miniseries, I’m puzzled how they’re going to cram in all the announced figures.

We’ve seen hints of Jason Todd, but that leaves us four installments to see Azrael, Deathstroke, The Batman Who Laughs, and Red Rain Batman. With this story taking two issues and only debuting one look, they’ve got a lot of ground to cover AND make it something that feels organic to the tale they’re telling.

Overall, I enjoyed this story, but have some caveats, mainly related to pacing and my own expectations.

The story goes by in a breeze and based on Dini’s previous comics writing efforts, I expected a little more meat on the bones. After the first issue, I was thinking each “episode” would consist of three chapters and maintain the act breaks of the show, but that is definitely not the case here. The inclusion of Jason Todd is something that warrants a lot of time and care since the Tim Drake of the Timmverse already has some very Jason-like qualities. How do you make this Jason stand out from his successor? I have faith in Dini and Burnett, but that doesn’t stop me from wondering.

Your mileage may vary, but the story is easy for all ages to grasp, balancing the fantastic with an air of mystery. Hopefully, this continues beyond the solicited six issues so Dini and Co. are afforded more of an opportunity to play in the sandbox they’ve built. – Javier E. Trujillo