SYNOPSIS: It’s Batman vs. Jack the Ripper in an Elseworld’s adventure that imagines the Dark Knight over a hundred years ago in a turn-of-the-century Gotham.

Gotham City, at the turn of the century, is experiencing a golden era of discovery and industry as showcased by affluent businessman Bruce Wayne’s World Fair. Down in the darkest alleys, there is a killer on the loose. Preying on the city’s women, this killer is as precise as he is cruel. As Police Commissioner James Gordon tries to calm the fears of Gotham’s citizens over the butcher named Jack the Ripper, the masked vigilante Batman does some detective work of his own, with the help of the sultry and surefooted Selina Kyle. Witness a world in flames as the killer’s controlled savagery meets the calculated stealth of the Dark Knight! 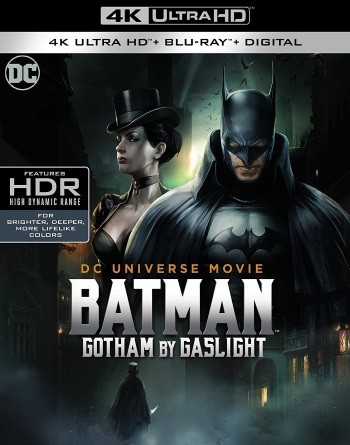 GOTHAM BY GASLIGHT is one of my favorite Batman comic book stories, and I’ve long wanted it to get the “animated movie treatment” from WB/DC.  Now 29 years after the graphic novel was originally released way back in 1989, it finally happened!

And it’s even better than I ever could’ve imagined.

Written by Brian Augustyn with art by Mike Mignola, GOTHAM BY GASLIGHT was the first graphic novel released under DC Comics’ “Elseworlds” banner and features the world of Batman set in the Victorian Era (late 1800s) with a good dose of steampunk mixed in.  The story consists of Batman battling the murderous Jack the Ripper who has migrated from London to Gotham City.

In the GBG animated movie, it’s also set in Victorian Gotham City, has Batman hunting the murderous Jack the Ripper, and includes a good dose of steampunk as well.  However, that’s about all that the graphic novel and film have in common as the latter is truly an adaptation of the source material.

And that’s WHY it’s even better than I ever could’ve imagined.

Instead of doing a straight-up, animated recreation of GBG – like we saw previously with YEAR ONE and THE DARK KNIGHT RETURNS – the filmmakers took the premise of the graphic novel, sprinkled in a few things from the comic, and ended up with something fresh and original.

Look, I enjoyed the heck out of both YEAR ONE and TDKR, but when you know the whole story from start to finish with these straight-up adaptations, it takes just a bit out of the viewing experience – you know what I mean?  Fans have asked me for years which Batman comic book would I like to see made into a film (live-action or animated), and my answer is always the same: None of them.  Give me something that’s “inspired by” great Batman stories – the more, the better – rather than literal adaptations anytime.  ANYWAY…

As I said, the crux of the GBG film is the same as the graphic novel – Batman vs. Jack the Ripper.  However, the ways the story plays out in each are very much different.  In fact, the identity of the Ripper in the film is different from the book, so you really don’t know who it is until it’s revealed in the end.  I know I didn’t know who the Ripper was while watching, so I was both surprised and shocked when I learned who it was – and it’s one hell of a twist!

Additionally, the film includes several classic Batman characters that were not in the book – Pamela Isley, Harvey Dent, Harvey Bullock, Lesley Tompkins, and the “3 Robins” (yes, the movie cleverly does “Robin”).  But, there’s one classic Batman character that’s basically the co-star of the film: Selina Kyle.  I’ll let you find out for yourself how the film does “Catwoman” and the relationship between Bruce and Selina, but I will say that it’s well done and it will not disappoint.

When it comes to the art and animation, it’s on par with what you’ve seen previously from these DC animated movies.  I thought they did a fine job of capturing the dark and dirty, if you will, look of a big city during the industrial 1880s, as well as Mike Mignola’s fantastic work in the book.

WARNING: This movie is not for kids – its rated R for a reason.  It’s violent, bloody, and contains some sexual content.  However, it’s not in there just for the sakes of “being in there,” if you get my drift.  To do this film right, this stuff had to be in there, so the R rating is not only justified, but proper.

GOTHAM BY GASLIGHT is a horror tale, a murder mystery, a detective story, AND one hell of Batman movie.  Just like the book is one of my all-time favorite Batman comic book stories, the film is now one of my favorite Batman films.

FYI: Do not watch the “Caped Fear: The First Elseworlds” special feature before you see this movie – it’ll spoil it for you! – Bill “Jett” Ramey