SYNOPSIS: As Batman and Batgirl follow an unexpected thread linking the three Jokers with someone from the Dark Knight’s past, Red Hood dives headfirst into trouble and finds himself struggling to stay afloat without the aid of his allies.  Batman: Three Jokers continues its trajectory as the ultimate examination of The Joker and his never-ending conflict with Batman. Prepare yourselves for the second chapter of one of the most terrifying and personal mysteries Batman has ever faced! 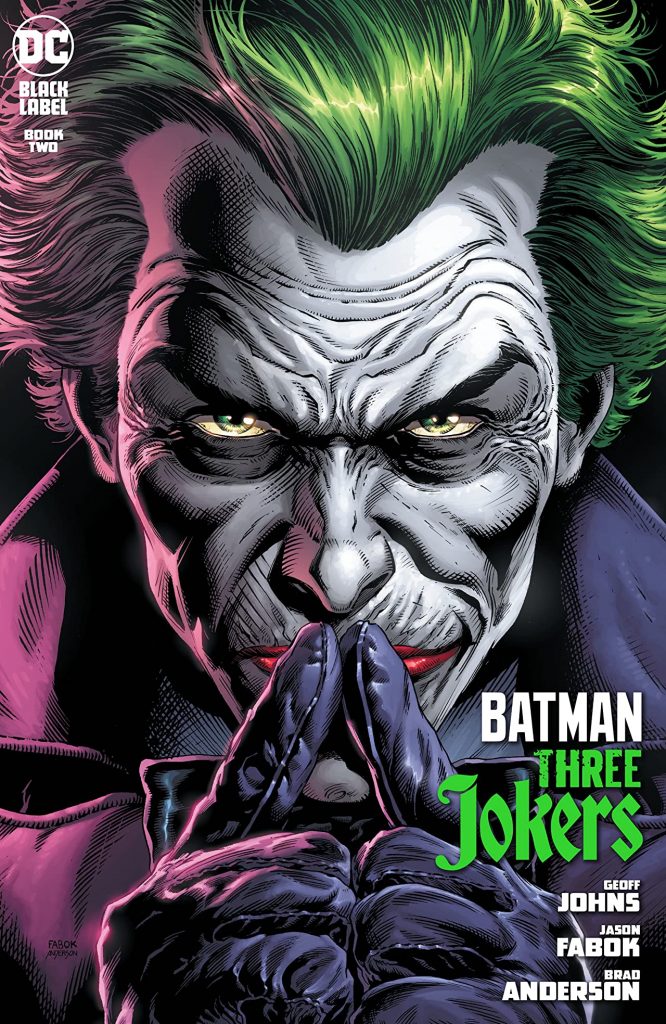 BATMAN: THREE JOKERS has an interesting concept that’s right there in the title. What we fans didn’t expect is that this story is also about trauma, and how three different characters deal with it.

After years of high anticipation, this Black Label series kicked off last month and knocked us on our butts. It exceeded all of my expectations, and I have been counting the days until the next chapter. I’m happy to say, I’m just as pleased this month as I was last.

Again, not to spoil anything, here’s a quick summary: after the surprising final pages of book one, Batgirl has to break the news to Batman, leaving Red Hood by himself. A wild card, with violent tendencies, on his own, can’t lead to anything good, right? What follows is a chilling confrontation, a horrifying reveal, and an intriguing cliffhanger that none of us would’ve guessed.

Geoff Johns continues to craft a solid mystery, that continues to provide answers while also asking more questions. The opening pages were BRILLIANT, as it delivered a Joker Elseworlds story that imagines THE KILLING JOKE playing out differently. Does this help explain the mystery behind three Jokers? We’ll have to wait another month.

Jason Fabok’s art continues to shine in the book of his career. I am in awe at this man’s panels. His detailed art oozes Jim Lee, David Finch, and Brian Bolland but also remains 100% Fabok. He focuses so well on emotion in the smaller scenes, while going big in the scenes that require it. A portion of this book (you’ll know when you read it) is a gorgeous horror scene on such a cinematic scale. I’ve been following this guy’s work for years, and he has pulled out all the stops for this series. Just perfect.

Regrettably, I failed to mention last month the lovely work from colorist Brad Anderson. His detail helps Fabok’s illustrations shine, making this the best-looking book of the year. You’ve seen his work on other popular titles, but I think this is his highlight.

The countdown for the third, and final, chapter starts now. It’s hard to believe we’ve been waiting so long for this book, and it’s almost over. Johns and company have inched us closer to the resolution we’re all waiting for, but they definitely have an ace (or Joker?) up their sleeve.

But I’m not worried about the three Jokers.

BATMAN: MASK OF THE PHANTASM Getting Theatrical Release