SYNOPSIS: An old face returns to Gotham when former Mayor Emerson Mayfield steps out of retirement, looking to once again rise to power. But Batman isn’t thrilled with the Mayor’s homecoming after his run-ins with him during his early years as the caped crusader. Can Batman deduce what Mayfield’s plan for Gotham is before it’s too late?! 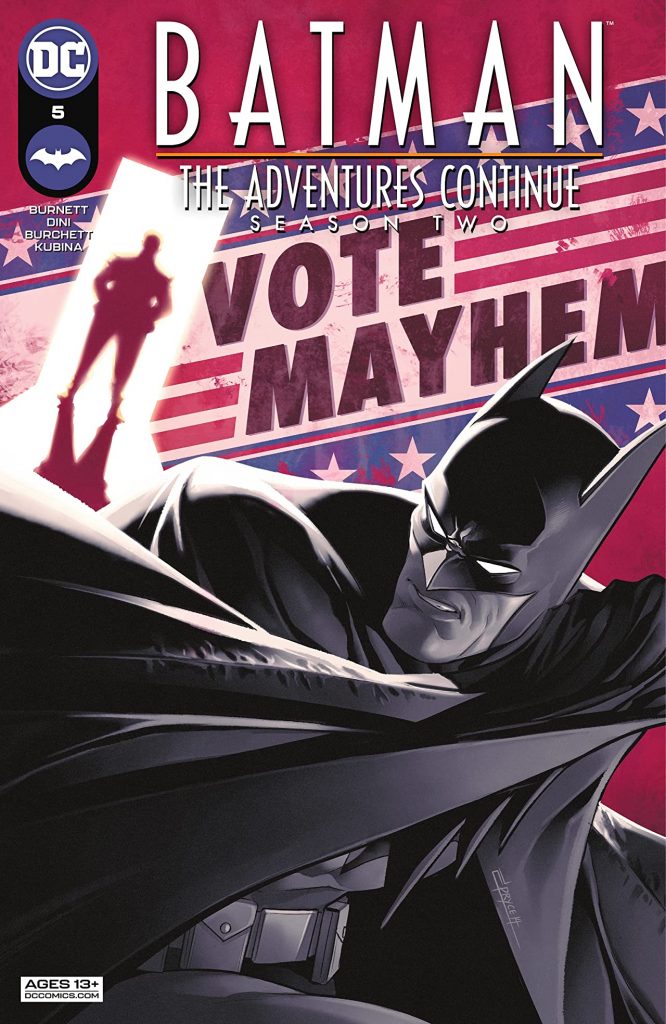 Outside of the occasional two parter, Batman: The Animated Series had a very episodic continuity, not really relying on the type of modern serialized storytelling we see today when it comes to many shows. What makes Season 2 of B:TAC stand out is that the original series creators are now back and working in that aforementioned format.

That point is clearly evident in this latest entry as events from the first issue have laid groundwork for all that has followed, with each “episode” a part of a larger tapestry and narrative. Hamilton Hill’s death has led the way for former mayor Emerson Mayfield to reemerge from the shadows to which he was banished and as we saw last issue, he is tying up loose ends so he can take back what he feels is his.

Hamilton Hill was the mayor throughout B:TAS, paying tribute to comics from the 1980s. As such, Emerson Mayfield is unknown to readers, his time in office coming in the early days of The Dark Knight’s career. Burnett and Dini take the time to expand on this unexplored era in their continuity, which is sure to delight fans on Team Yellow Oval! Yes, thanks to the magic of flashback, the classic animated look has returned as the Bat Family gathers around the Bat Cave to hear the Caped Crusader tell a story from Year One of his storied career!

The time setting gives us early looks at a pre-Two-Face Harvey Dent, Carmine Falcone (!), and reporter Summer Gleeson, whose first major interview was with then-Mayor Mayfield some fifteen years ago. As Batman was at the beginning of his career, the populace was still trying to figure out what to make of him. Being secretly corrupt, Mayfield used their skepticism to his advantage, creating his own team, M-Force, who answered solely to him, not to Commissioner Gordon.

So, while this team publicly is known as an anti-crime task force, it’s anti-Batman, too. Having them working for the mayor to steal money from criminals and secretly hide it makes it easy to make comparisons to Batman: Year One when it comes time for The Dark Knight to confront them. Dini and Burnett make the most of this team’s illicit actions, depicting them as they murder and steal without care as to who gets in the way. This book doesn’t shy away from fatal consequences and the cost of operating in Gotham.

I really appreciate once again how dense this issue feels. There’s a lot of groundwork laid out in both the past and the present as the writers catch the readers up to speed on the rise, fall, and rebirth of Mayfield’s time in office. They also get the best of both worlds by spotlighting a solo Batman and one surrounded by his team. In particular, I enjoyed seeing the Bat Family relish hearing of a rookie Batman who wasn’t perfect when he started out.

Rick Burchett returns again to art chores. To be honest, he didn’t dazzle me as much as he did on issue 3. At times the art seemed rushed to me, almost choppy, but that just may be how the review copy came out. He definitely does add details to this often simplified-looking world, but something just looked off to me and unfinished at times. It was sweet seeing that yellow oval, though!

I know I’ve been in the habit of making this observation, but it bears repeating. Just like the series it’s based on, Dini and Burnett are crafting a story that looks like a kids show, but is far from it. People bleed when punched or shot, corruption is rampant, citizens are manipulated by those who are sworn to protect them, and power is abused. Even as a novice crime-fighter, Batman is ingenious in how he deals with M-Force and the mayor. He is the Dark Knight through and through in this issue and I can’t stress enough that you should be reading it if you’re a fan of this iteration! – Javier E. Trujillo

BATMAN: THE MAN WHO LAUGHS Review