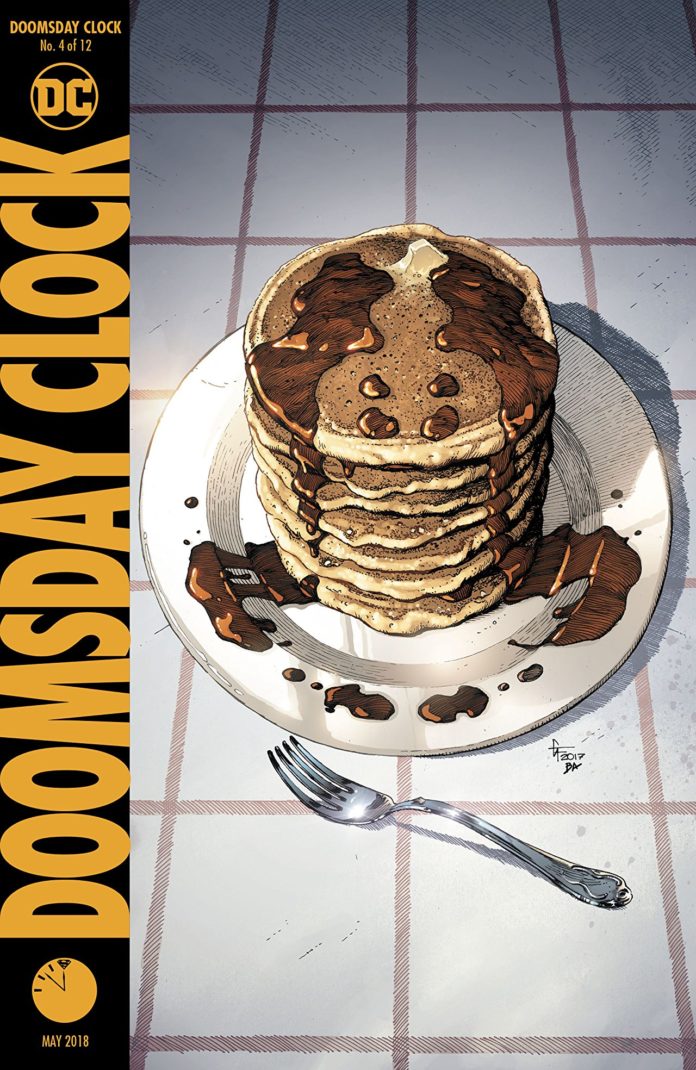 SYNOPSIS: The series you thought you’d never see reaches its fourth issue with a shocking revelation about the aftermath of Ozymandias’ actions and how they reach into even the darkest corners of the DC Universe. Don’t miss the latest chapter by the acclaimed team of writer Geoff Johns and artist Gary Frank!

After a 2-month hiatus, and shifting into its bi-monthly schedule, Doomsday Clock picks up this week with issue #4. In case you need a quick refresher from last issue (in January): Rorschach snuck into the Batcave, confronted The Dark Knight with Rorschach’s journal, and was duped into a cell in Arkham Asylum.

Rorschach (#2) is the star of this issue. We get a full backstory, much similar to the style how the original series gave an entire issue to the original character. Many revelations come about, and many fans (including me)  get to say “I was right!” when his identity is revealed. The issue ends on a calm note, rather than a cliffhanger, which doesn’t create much anticipation for the next issue (in May). I’m not saying that’s a bad thing. Given this new release schedule, my buzz could get frustratingly killed knowing I’d have to wait so long and I’m left on the edge of my seat. This is a good adjustment.

On paper, the synopsis of this issue wouldn’t excite me. I don’t feel a huge urge to get a full biography on this new character who is compared to a series favorite. Luckily, Rorschach (#2) has Geoff Johns in his corner. What the author does is create a captivating, emotional and deep background for someone we otherwise couldn’t give 2 sugar cubes about. I appreciate the time he takes here to give us an inside look at how this new character operates. I don’t want to spoil much, but I think Johns has really zoned in on people with PTSD: here, the after effects of those who lived through the devastating events at the end of Watchmen. It’s effective, and makes us sympathetic to this new guy.

Also reaching back to Watchmen, more specifically Minutemen, we meet up with Byron Lewis, aka Mothman. It took me a few seconds to catch this (even with Johns making it extremely obvious), but he plays such a warming supporting character throughout the whole issue. The parallels drawn between a bug zapper and Rorschach’s past experiences was interesting, and spot-on.

There’s nothing new I can bring to the table for Gary Frank’s art. It doesn’t surprise me he needs more time to nail every panel on this book because it is incredibly detailed, and inked beautifully by Brad Anderson. There’s a lot of 9-panel pages here (the Watchmen formula), each one servicing the story in both subtle and blunt ways. I love every page here. Well done Frank.

Doomsday Clock #4 is a slow, intricate tale of a new Rorschach and how he came to be. Geoff Johns and Gary Frank take their time to be delicate and attentive in constructing this issue. I really dug this issue, and am ready for them to pick up the pace next issue. The clock is ticking slower these days, but we have a lot of story to get through.

The Mount Rushmore of Batsuits on Film