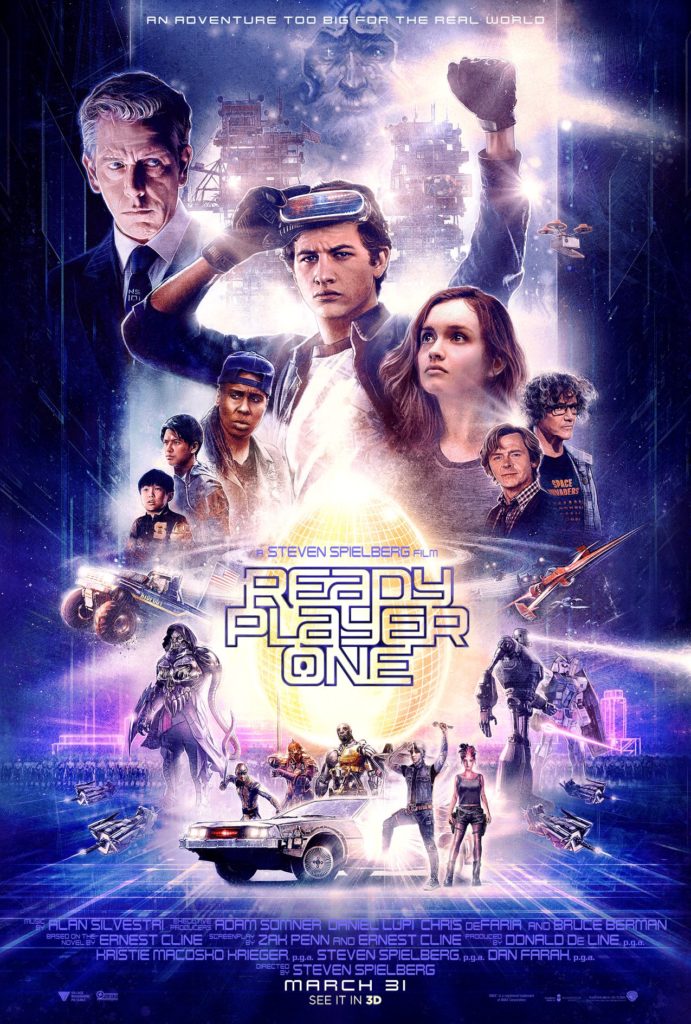 Are you ready for Ready Player One? You’ll be swept into it whether or not you’re ready! Consider it a gift from director Steven Spielberg and novelist Ernest Cline, whose novel of the same title inspired the film. Cline, along with Zak Penn, also wrote the screenplay. Industrial Light & Magic provides spectacular, dizzying special effects to delight gamers. Even if you’re not a gamer, like me, you won’t be lost. It’s also a nostalgic journey into the past with many an homage to 80’s and 90’s pop culture.

Ready Player One takes place in a near, dystopian future (the 2040’s) when the earth is very much depleted and people seek escape in the virtual world of OASIS. OASIS is the epitome of virtual reality games, created by a lonely, socially-awkward genius, James Halliday (Mark Rylance), and his partner Ogden Morrow (Simon Pegg). A game hidden within the virtual world of OASIS, Anorak’s Quest, created by Halliday to determine the ownership of OASIS after his death, has become the all-consuming obsession of the most dedicated Gunters (egg-hunters). The Quest involves locating 3 keys within the game, each containing a clue to the location of the ultimate priza Easter egg. The player who finds it inherits OASIS and the riches that go with it.

Tye Sheridan plays Wade Watts, an orphan who lives with his aunt in The Stacks of Columbus, Ohio. The Stacks consist of vertical structures with levels of platforms supporting old mobile homes. Conditions are ghetto-like, and Wade spends most of his time in OASIS as his avatar, Parzival. All of his friends are avatars too, and all pursue the elusive Easter egg.  Aech is an enormous, robot-like being who operates a machine shop in OASIS and earns money fixing computer-generated cars, weapons, and the like. Brothers Sho (Phillip Zhao) and Daito (Win Morisaki) are martial arts experts. Parzival has been trying to hook up with a beautiful player/blogger, Art3mis, who is famous for her skill in the Quest. They eventually unite as the High Fives and work together to find the Easter egg.

Sounds easy enough, right? Well, of course there’s a nasty villain who wants to take over the OASIS world and use it to further enrich himself. He is Nolan Sorrento (Ben Mendelsohn), CEO of Innovative Online Industries which produces most of the technology that runs the OASIS program. He “employs” an army of debt-indentured players called Sixers due to their 6-digit id numbers. They are imprisoned in Loyalty Centers and forced to continuously play Anorak’s Quest until one of them finds the Easter egg for Sorrento.

Sorrento has the money to buy or develop the most sophisticated technology to win the prize, and he also uses a shady weapons procurer/bounty hunter, I-Rok (T. J. Miller) to gain stolen, extreme weapons to throw the advantage his way. He has a ruthless enforcer, F’nale Zandor (Hannah John-Karnen) who carries out all his real-world dirty work.

With few financial resources, Wade relies on research from the vast archives left by the now-deceased Halliday, tended by a robot Curator. He’s confident that the answer lies in Halliday’s past and regrets about his life. He has to convince Art3mis to accept his ideas, but she and the others come around to his point of view. If you haven’t read the novel, it’s best to know as little as possible about the plot. It’s full of surprises and definitely a crowd-pleaser…so is all of the retro music!

Is it perfect? No. It’s a bit slow in the beginning, and it could use more development of the character arcs. It’s “messages” are quite simple and served up with obvious symbolism. But the stunning visuals of the OASIS produce appropriate wonderment and compensate for any short-comings.