SYNOPSIS: Batman is racing against time to stop Gotham City from tearing itself apart as the Scarecrow’s long game is revealed. The Dark Knight has bigger problems though, as an insane Peacekeeper-01 is on a murderous rampage through the streets of Gotham! Can Peackeeper-X stop him?! Back-Up: Clownhunter has been doused with Fear Toxin at the hands of the Scarecrow, and he is living out every anxiety, moment of pain, and heartbreak he’s ever had. Will he find his way out and resume his goal of being Gotham’s protector from clowns? Or will he succumb to Scarecrow’s greatest mind game yet?! See the end of this epic story that will change Clownhunter’s trajectory in Gotham City forever! 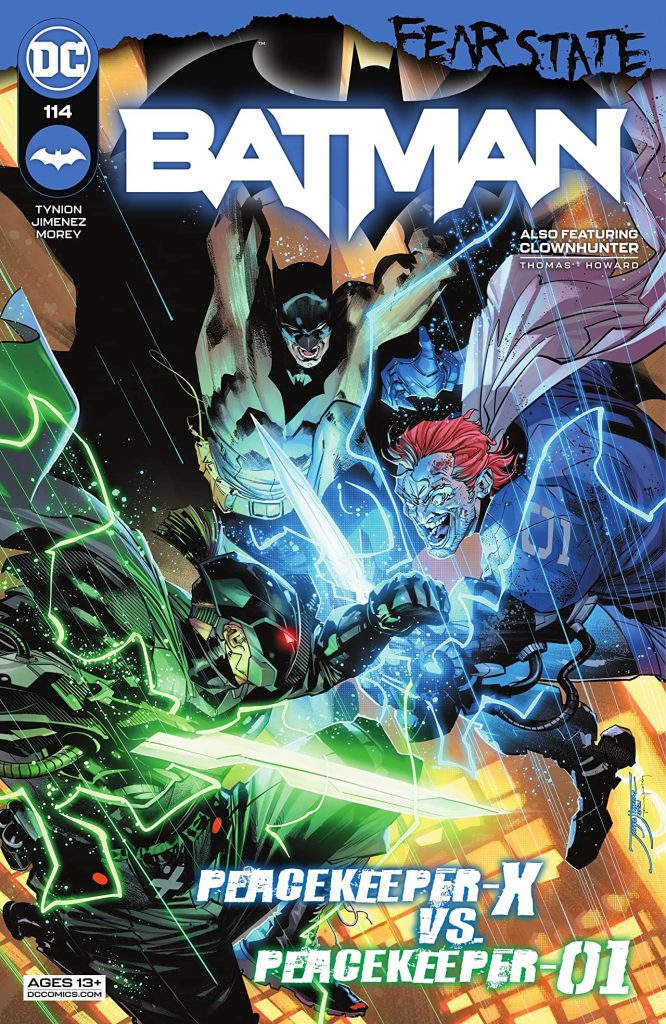 I’ve long said I will approach every issue of BATMAN with an open mind, and be willing to go along for the ride. I swear to you I did that with this week’s issue, BATMAN #114.

However, I’ve come to the realization that I simply don’t enjoy this title right now, and am counting down to the end of “Fear State”, and with it, the end of James Tynion IV’s run.

This issue has our hero taking a backseat (in his own title) to focus on a showdown of characters that we (or at least I) don’t care about. The Peacekeepers are a focal point in this whole experiment, and the toys of both Scarecrow and Simon Saint. Tynion has just made their use so confusing and convoluted, mixed in with a number of other new characters, that I just don’t care what happens. There’s dialogue on what the citizens of Gotham are scared of, but we’re just not seeing it. Miracle Molly (a forced new character) has a breakthrough on what Scarecrow’s really up to, but it’s mixed in with all of this other chaos.

Simply put, this book is a mess.

Jorge Jimenez continues to save this title, and he has some good-looking pages here. Though I don’t care about the Peacekeeper fight, it is illustrated really well. Batman’s entrance is also a frameable image, as are all of the robots flying behind him. Jimenez is the strength of this book, and I’m excited to see what he does next.

I apologize if I sound harsh, and you’re getting a lot from this book. Sadly, I am not. There’s no redemptive issue here, or major “ah ha!” moment on the horizon.

I’ve always been told if you don’t have anything nice to say, don’t say anything at all. With that, I’ll say I’m REALLY looking forward to BATMAN in December.