SYNOPSIS: At last, Tom King returns to the rocky, romantic saga of Batman and Catwoman with his Heroes in Crisis collaborator, superstar artist Clay Mann! 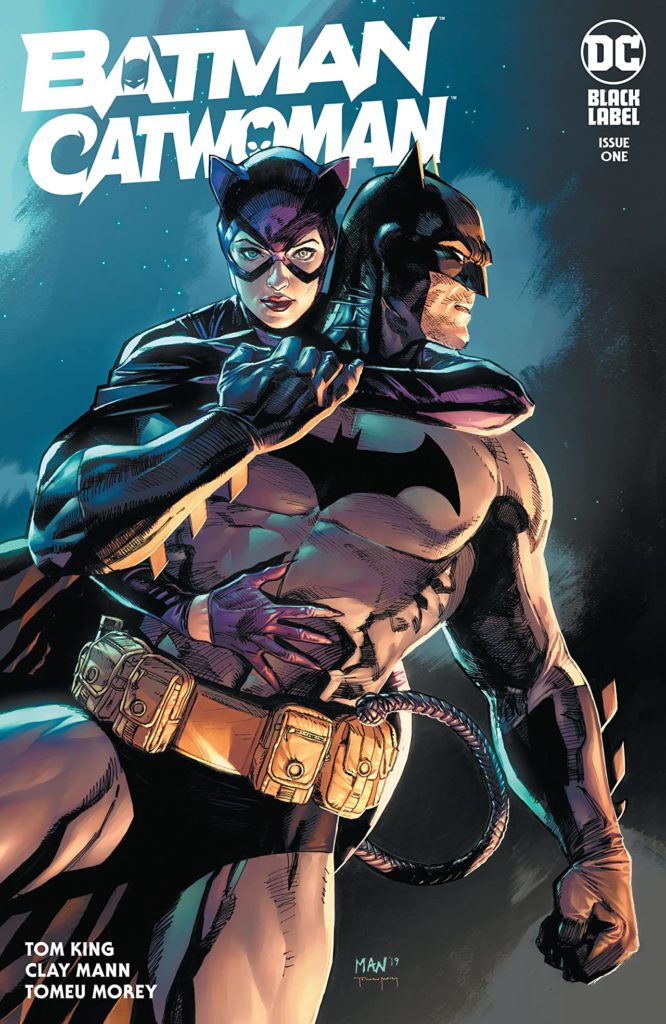 Echoing plot points from King’s epic Batman run, this sweeping tale is told across three timelines: the past, when the Bat and the Cat first fell in love; the present, where their union is threatened by one of Batman’s lost loves; and the future, where the couple have a happy life and legacy-including their daughter Helena, the Batwoman. And as the story begins, after a long marriage, Bruce Wayne passes away-which frees Selina Kyle to settle an old score.

At every stage of their relationship, Bruce and Selina have an unwelcome chaperone: The Joker!

“You get to a certain age and…these days, everything is just the end of something.”

If nothing else, writer Tom King perfectly sums up how so many are feeling in 2020.

The road to this particular story, now falling under the Black Label banner, has been a long and twisty one, to say the least. Once originally intended to cap off King’s legendary run of Batman in the Rebirth era, it finds itself outside main continuity now, but because of that, now has more freedom in the tale it wishes to tell.

For me, King’s era of Batman was hit and miss, with me often disliking an individual issue upon its original Wednesday release, but then falling in love with it once that particular story arc was complete.  King in all his DC work definitely likes to push boundaries and take chances.

One of the things I loved unequivocally about his time in the Bat Cave was his handling of the Bruce and Selina love story, so this series is one I have been looking forward to for some time. These star-crossed lovers are so wrong, and yet so right for each other and King works with that dynamic well.

I am also, like so many, a gigantic fan of Batman: The Animated Series and its big-screen offshoot, Batman: Mask of The Phantasm. I was fortunate enough that my dad took my brother and me to see it in the theater back during its theatrical run and to this day, it is still one of the greatest Batman movies ever made for the silver screen, be it animated or live-action. I made sure all my friends saw my VHS copy growing up, I loved the story of Bruce Wayne’s unrequited and tragic first love so much. To hear that King was bringing back that movie’s titular villain filled me with excitement, especially knowing she would be facing off against the dynamic of Batman and Catwoman as a couple!

Now that I’ve established how much I love these characters, what did I think of the inaugural issue?

Long story short, I was enthralled from beginning to end!

King has woven a complex story that slides across several eras of time. It is a story of beginnings and endings. A story of a love lost and also love at its dawn. And murder. Lots of murder. This is a Batman story after all, and with the Clown Prince of Crime, no less!

Much like the movie, The Joker is involved in Andrea’s tale of woe. I appreciated the nod to the events of the film, giving a cursory context to their backstory, but still allowing King some wiggle room to tell his story. He’s already added a wrinkle-Andrea has a son! One of the many mysteries King lays out is who is his father? At the moment, I haven’t a clue.

King utilizes a wintery setting in this to a great effect. Not only is there a holiday-style window box to open for each issue, making the comic you are about to read feels like a present, but an older Selina Kyle starts things off by singing “Silent Night”, which gets bookended at the end when present-day Andrea does a reprise. Considering that the inaugural issue drops in December, it all feels very fitting and subtly gives me a “The Long Halloween” vibe, when each issue was themed to the month in which it was released.

There’s also an undercurrent of horror to this book. Unsurprisingly, most of this has to do with The Joker. There’s something unsettling about the way Mann depicts him. Attired more like a mobster than the Harlequin of Hate, it links him into his origin as seen in Mask of The Phantasm. Our first glimpse of him is very noirish as he clicks on a lamp, his eye a dark pool with a glint of malice. There’s something about him calling Catwoman “darling” repeatedly that creeps me out, while at the same time recollects him using the term for Batman during The Dark Knight Returns. In a year overflowing with Joker stories, his presence here is welcome, especially considering his deep connections to our three leads.

King’s run on Batman has always been blessed with fantastic art and he reunites here with one of his past collaborators, Clay Mann, of “Super Friends” and “City of Bane” fame. I’ve never seen Mann draw a bad comic and he certainly keeps with that tradition here. His pencils are spectacular-his heroes are powerful and sexy, his villains terrifying and wicked. His art is key to King’s storytelling. Without captions describing when the story is taking place, it’s up to Mann to establish the time period with his art, especially as King has the era shift mid-page at times. Context is everything and Mann, aided by the coloring of Tomeu Morey, makes it easy for the reader to discern what’s going on. Morey is just as vital to the book, especially when it comes to the big reveal.

There’s so much I want to rave about over and over-the nods to the animated series, be it Catwoman’s revamped present-day costume or the appearance of Sewer King, the quick flashback to Alfred, the future Selina visiting an old friend, and Andrea excavating her costume! I flat out loved every moment of this comic!

It’s obviously too soon to tell if the end of Tom King’s Batman epic was well worth the wait and journey getting here, but it is certainly off to a very promising start! Every page is a visual delight thanks to the art team and King certainly does his part crafting a complex narrative showcasing love in bloom and the melancholy of love lost.

“…Everything is just the end of something.”

This end is worth being there for. – Javier E. Trujillo