Ryan Lower hosts “The Batman On Film Chronicles” — the official history of the website as told by BOF’s founder, Bill “Jett” Ramey.

Part One of TBOFC covers BOF’s origin story in 1998 up to the 2003 announcement that a young filmmaker named Christopher Nolan would direct a new solo Batman movie. 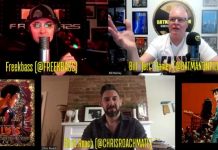