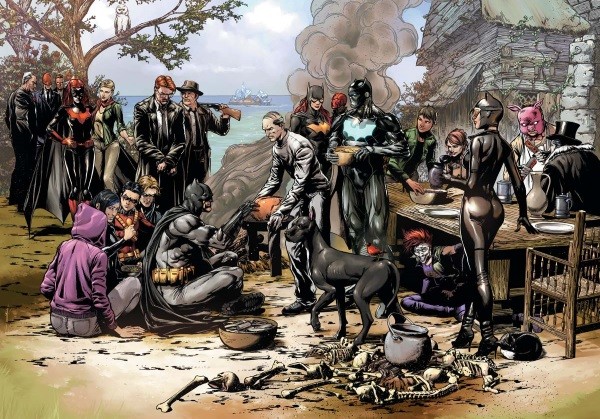 Even though it’s been one HELL of a year, Happy Thanksgiving 2020 to all you BOF’ers…and let’s hope that 2021 is MUCH better!  Now, on to the mailbag. – Bill “Jett” Ramey

Do you think there’s a chance THE BATMAN will ever go to HBO Max?

JETT SAYS: Like how WONDER WOMAN 1984 is going to be released on Christmas Day?  I do not.  But I’m sure the film will end up on HBO Max eventually.  I’m pretty sure that THE BATMAN — with its March 4, 2022 debut — is going to have a “normal” film release…fingers crossed.

Any truth to the BATMAN BEYOND rumors?

JETT SAYS: The one’s currently floating around?  I highly doubt it.  I’ll say this though, it seems that they have plans for Michael Keaton’s older Bruce Wayne post-THE FLASH.  I’ve heard it’s going to be a riff off of BATMAN BEYOND — not a straight-up adaptation — and will feature Keaton’s Bruce mentoring a “successor” that could in the form of a Batgirl or Nightwing.  We shall see.

Will we see or hear about any other characters from the Burton/Schumacher series in connection with Keaton’s Batman? How many appearances do you think we’ll ultimately get from him?

JETT SAYS: I doubt it.  Keep in mind that even though Keaton’s Bruce Wayne (Batman?) is a major role in THE FLASH/FLASHPOINT, it’s still a Flash movie.  “If” he signs on, I figure it’ll be for 3 films.

Do you think there’s a chance we will see Poison Ivy or Clayface in The Batman trilogy? #BOFMailbag

JETT SAYS: I doubt it…unless Poison Ivy isn’t truly poisonous and Clayface isn’t a shapeshifting blog of mud. There are ways to do both characters that aren’t as fantastical as their comic book counterparts. Remember, Clayface was originally a master of disguise.

Is the ending of THE DARK KNIGHT RISES just Alfred’s fantasy happy ending?

JETT SAYS: Nope, and it’s not really even ambiguous.  The film’s director added a few things into the ending montage and that shot in the cafe which clearly shows that Bruce lived.

I was very looking forward to seeing Terence Winter as “Gotham Central”‘s showrunner. Given his terrific take on “Boardwalk Empire”, what do you think to have put him at odds with WB enough to made him leave the show?

JETT SAYS: We talked about that on the 2nd episode of THE BATMAN ON FILM SOCIAL HOUR last week (check it out here).  I wouldn’t say he was at odds with Warner Bros., I believe his take on what the show should be likely differed from THE BATMAN-verse boss Matt Reeves’.  Remember, “Gotham Central” is a prequel to THE BATMAN, so there are some limitations when it comes to aesthetics, characters, story arcs, etc.

#BOFMailbag – if you could have had any director in history direct a Batman film – who would it be?

JETT SAYS: Matt Reeves and Chris Nolan. But in the spirit of your question and excluding previous and the current Batman on film directors, I’d like to see what Darren Aronofsky would do with a Batman film — and not his YEAR ONE project from the early 2000s.

Do you specifically know that Matt Reeves will make a trilogy if the first one is successful?? What do you think about 5 movies with Pattinson? Matt doesn’t have to direct all of them. He can produce them.

JETT SAYS: Now, you should know by now I rarely straight-up reveal what I know, right?  I will say that based on “educated guessing,” that yes, Reeves has a trilogy planned.  And no, I do not think we’ll get 5 Batman movies from Pattinson, in my opinion.

#BOFMailbag How do you think Bruce Wayne prefers his turkey? Fried or roasted?

JETT SAYS: Well, since Gotham City is supposed to be in the Atlantic Northeast ala New York City, I’m guessing that he probably goes for a roasted turkey as it’s more the norm in that part of the U.S.

With THE BATMAN set to come out in March of 2022, is there a possibility that we could see another trailer coming out in 2021?

JETT SAYS: At one point, I’d heard there would be one dropping around Christmas of this year; but I figure those plans have now changed since THE BATMAN has now moved to March of 2022.  With that said, yes, I’m quite sure they’ll drop another trailer or 2 in 2021 — maybe in the Spring and for sure at next year’s DC FanDome.

Any chance we’ll see The Scarecrow and Arkham Asylum in the sequel to THE BATMAN if the film does well? I would love that time of year to be Halloween.

JETT SAYS: Who says we won’t see Arkham Asylum in THE BATMAN?

Does Alfred serve vichyssoise during holidays?

Will be present Matt Reeves #TheBatman in ccxp brazil?

JETT SAYS: Matt Reeves said he planned to attend and bring THE BATMAN to CCXP Brazil 2021…but then the F’n pandemic hit. It all depends on how our world is doing with COVID-19 later next year. So I guess that’s a stay tuned for all of us.

Jett, I’ve been with you since the days of “JettD60s Batman 5 Page!”  Your experiences, connections you’ve made and the integrity of non-spoilers reporting have brought a reputation of being the go-to for accurate reporting on everything Batman/DCEU on film and beyond. BOF has certainly developed quite a history. One can search the archives to find the history is well documented. But the legacy of BOF is another subject. When it’s all said and done — after you’ve hung up your mallet that’s beaten the hell out of that drum for all these years to influence some of the most critical and financially successful films of all time — and look back on all you’ve accomplished on behalf of the fans, what do you view or imagine BOF’s legacy will be? Happy Thanksgiving and thanks!

JETT SAYS: Thanks Stacy for the kind words!  While I’m not ready and not planning on hanging up the mallet that you mentioned yet, so I’m not sure what my legacy will be.  I’d hope people remember me as a true Batman fan who cared immensely about the character and I did right by Batman in the way I ran BOF.

Is there any info on who will be the new showrunner on the HBO Max [THE BATMAN] prequel? Or do you expect Matt Reeves to step in as showrunner instead? Cheers!

JETT SAYS: See a previous Q/A above sir.  And while I don’t expect Matt Reeves to be the showrunner, I do expect his vision for THE BATMAN-verse to be carried out by whoever ends up getting the gig.

How long do you think will take before COVID-19 is integrated into comic book plots? I see a potentially kickass story with Ra’s behind it, no?

JETT SAYS: Probably never…ish.  With as many people who have suffered and died due to this disease/pandemic worldwide over the last year, I can’t imagine that it would be specifically named and incorporated into comic books anytime soon — especially as a biological attack by a fictional character like Ra’s Al Ghul.

It has been one hell of a year in so many ways… and if you are a Batman fan the roller coaster has been an exciting one. What news from the past 12 months surprised you the most?

JETT SAYS: LOL!  That’s a loaded question, no?!  Excluding ZSJL — which happened only because of AT&T and HBO Max — it’s Michael Keaton returning as Batman/Bruce Wayne in THE FLASH/FLASHPOINT.  That former I couldn’t give a damn about; the former I think is awesome.

So has WB had any talks with Reeves to see how much leash Snyder would be given?

WB has BIG plans for THE BATMAN, its sequels, and THE BATMAN-verse on film and TV.  ZSJL is a one-off. So there you go.

Besides of the fact that it is being written by Christina Hodson, is there a relation between ‘The Flash’ film, and the ‘Batgirl’ script?
Will Michael Keaton appear in ‘Batgirl’?
Is it true that DC is working on a comic book series set in the Burtonverse?#BOFMailing

JETT SAYS: I’ve heard whispers that Michael Keaton could reprise his role of an aged Bruce Wayne in a film that riffs off of BATMAN BEYOND but could feature Batgirl or Nightwing as this protege.  So yeah, I suppose it’s possible.

As far as a Burtonverse DC comic book series, I’ve heard nothing about that.