SYNOPSIS: Apparently taking down the mob, straightening out some crooked cops, and gaining control of Alleytown is not enough for Selina. She’s also taken it upon herself to make sure the streets of her newly adopted home are safe for the group of stray kids she’s taken under her wing and she’s going to do it by teaching them to steal the streets back for themselves! Introducing: Catwoman and the Strays! 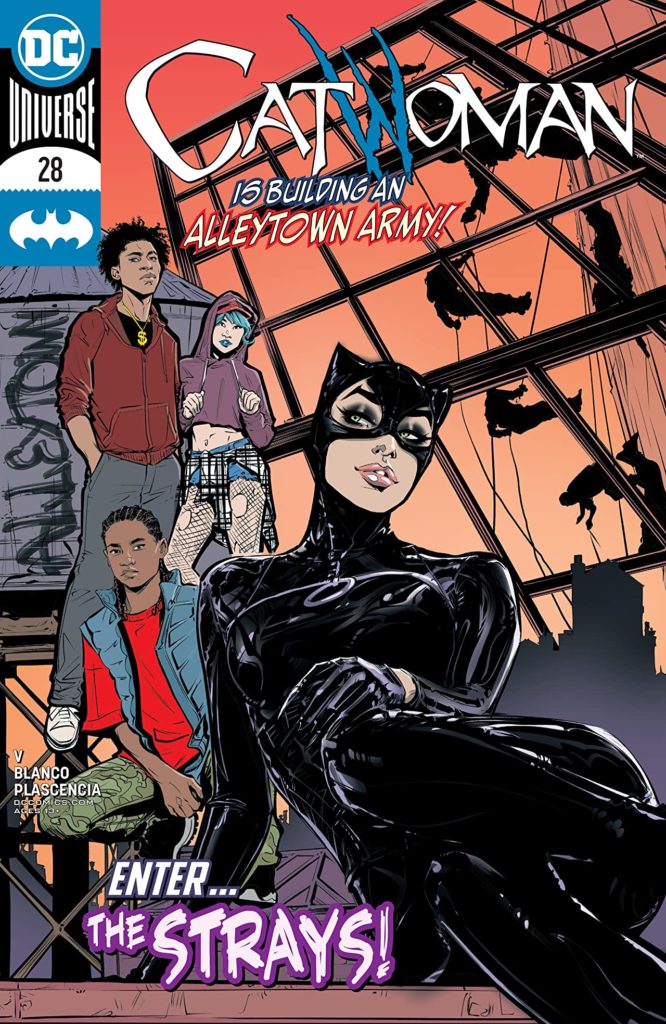 She doesn’t find this a-meow-sing anymore.

After stirring the pot in a big way by hijacking a major shipment of drugs, Selina is under fire from a rather pissed-off crime boss who has sent a hit squad to her nest to have her put down.  But these new crime families in Alleytown don’t have a clue who they are dealing with, nor are they aware of the extent to which they’ve underestimated her.  In Selina’s own words: “There is only one queen in Alleytown.”  Fasten your seatbelts, because Catwoman ain’t going down without a fight!

Last issue, I was convinced that Ram V had been playing a bit too much Grand Theft Auto.  This month, I think he’s been diving into the Christmas season and binge watching the Home Alone movies.  The traps that Catwoman sets for the criminals coming to her nest in Alleytown are very reminiscent of the kind a young Macaulay Culkin laid for Joe Pesci and Daniel Stern.  Flooded basements, a false floor that gives way once you walk over it…  Maybe it’s just me.  All that said, I’m still quite pleased with what he’s doing with this story.  It’s street-level, it’s gritty, and it’s quite a bit of fun.  I hope he can sustain it and build upon it successfully.

And I have to say – I love that he’s taking his time with the Father Valley character.  He’s turning out to be quite unpredictable, which I didn’t, er, predict.

Lastly on the story side, Ram V leaves us on a compelling reveal on the last page.  I won’t spoil it for you, but I’m interested to see where the story goes from here (once the Future State Catwoman books are through)…

The same crack team is back on art this month – Fernando Blanco and FCO Plascencia on pencils and colors, respectively.  The book is quite fetching.  There’s one image in particular, spreading across both pages, that was pretty darn cool.  It shows Selina in action at the Gotham docks – flipping across rows of shipping containers while dispatching bad guys.  There are panels inserted within the larger image that give us a zoomed-in picture of the pummeling that she’s distributing.  This was a good moment that left a kinetic impact.

Another solid entry this month!  If you’ve been enjoying Catwoman the last couple of months, be sure to pick this one up – you won’t be disappointed. – John Funderburg