SYNOPSIS: A story over a year in the making and set into motion with Infinite Frontier #0, Fear State begins! Batman played into the hands of the Scarecrow, who has unleashed a coordinated attack on Gotham City through his manipulation of Simon Saint and Peacekeeper-01! But there are other forces at work with the emergence of an Anti-Oracle spreading fake news across all channels and inciting terror and violence on the streets of Gotham! Backup: Clownhunter has turned down help from Batman, Leslie Thompkins, the Red Hood, and everyone else who has offered it to him, thinking that he can handle being a vigilante on the streets of Gotham City by himself. But when he takes a shot at fighting the Scarecrow one-on-one, he’ll learn very quickly how much in this city he’s not ready for yet. NEW HERO – PEACEKEEPER X! 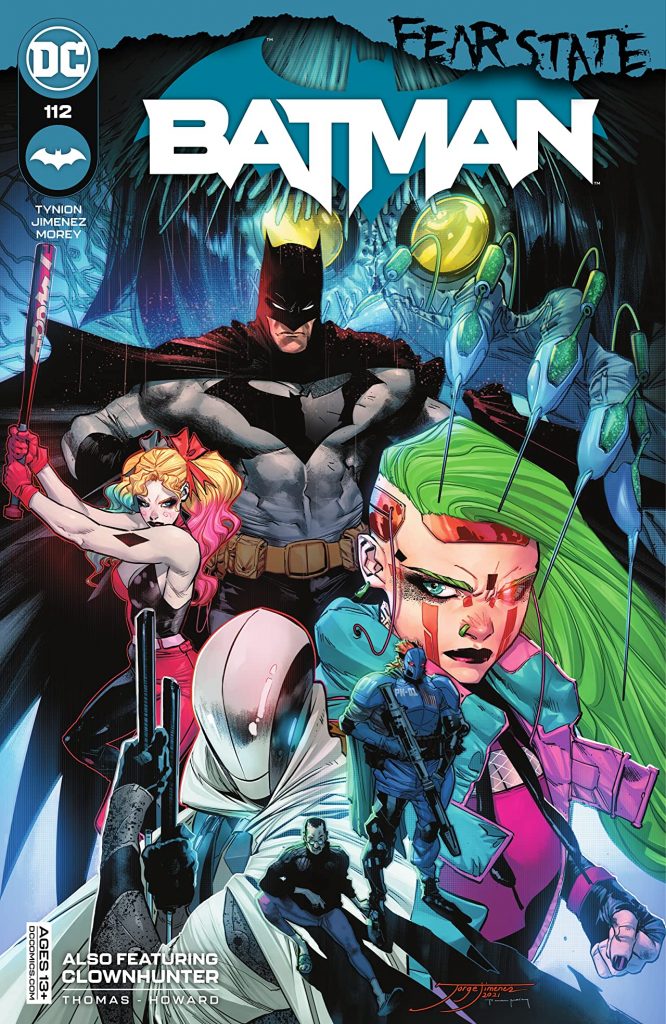 “Fear State” has arrived in the BATMAN universe, turning Gotham City into a panic. The Scarecrow’s seeds of terror have finally blossomed, creating chaos for Batman and his allies. Simon Saint’s Magistrate agenda, headlined by his Peacekeeper-01, has also been disrupted, causing the tech tycoon to create a spur-of-the-moment solution.

Since “Future State” ended in February, writer James Tynion IV has been building to this event in the monthly pages of BATMAN. While Scarecrow was teased as the main villain, we’ve actually been given other threats to focus on even more. And though this is a BATMAN title, our focus has also been on other characters instead.

None of this has changed with the kickoff of “Fear State”, and that’s disappointing.

I don’t want to repeat what I feel like I’ve been saying for the past 6 months, so I’ll keep my thoughts on this specific issue: Scarecrow is cool but also like Batman, we don’t get enough of him. There’s too much focus on Simon Saint and his Peacekeeper business. This side quest with Poison Ivy, Ghost-Maker, the Unsanity Collective, and others is pointless to me and uninteresting. The issue also ends….how do I not spoil this…with someone created to take out someone we don’t care about in the first place.

The issue isn’t bad, I just don’t know what our point is. Scarecrow is the villain, creating panic in Gotham without his fear toxin, but we don’t really see him and focus more on Simon Saint who is the real villain, yet also Poison Ivy is a queen living underneath the city?

Jorge Jimenez continues his artistic duties and does a fine job. His moments with Scarecrow are what really shine, creating a really cool atmosphere that fits the Batman rogue. We just don’t get enough of them. His action scenes are also unique and different than what we see in other comics currently. I’ve really enjoyed his work on this book.

Overall, BATMAN #112 gets a big “meh” from me. Too many elements shift the focus away from our main hero, creating a convoluted issue with a hollow ending. There are some good moments, topped off with great art, so if you’ve been collecting I wouldn’t say you need to stop. I can’t fully recommend you keep going either. – Ryan Lower