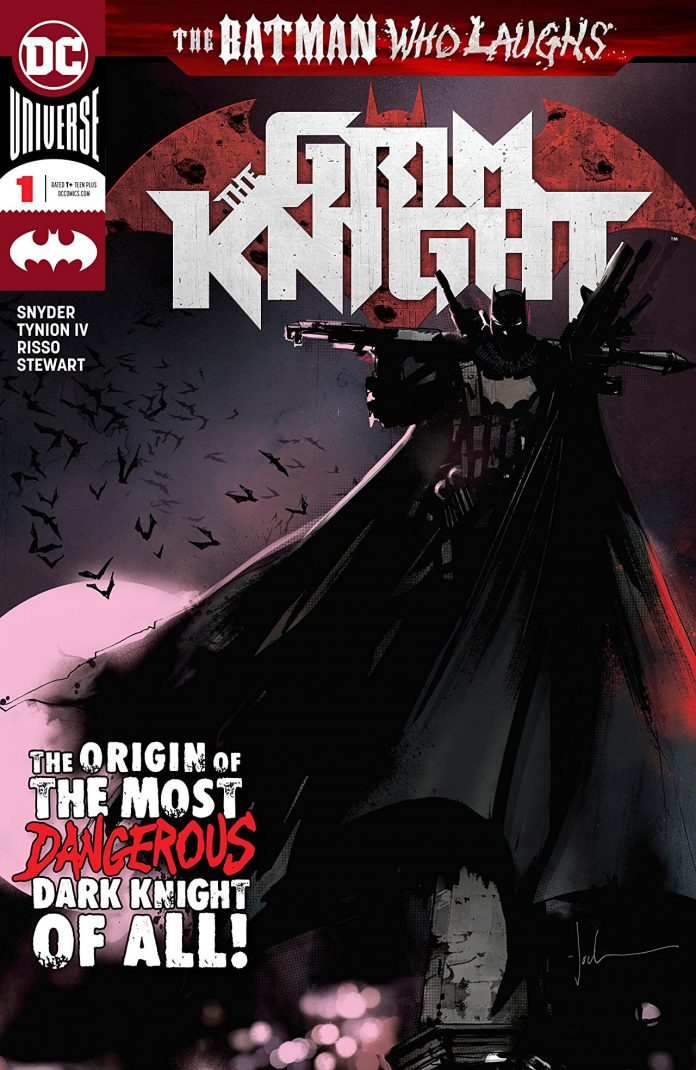 SYNOPSIS: Ripped from Batman’s greatest nightmares, the Grim Knight is his world’s most dangerous vigilante, unafraid to use any weapon and go to any lengths to stop those whom he deems worthy of death. Trained with the finest arsenal Wayne money can buy, learn the secret origin of the second-deadliest Batman, hand selected by the Batman Who Laughs to bring his dark plans to fruition. This one-shot has a big 28-page story!

I’ve become so used to twists, turns, and being shocked that the straightforward stories sometimes leave me wanting a bit more than I’d care to admit.

In The Grim Knight #1, we don’t learn anything significant that we already didn’t know about the Grim Knight…save for the juicy details of what moment from the real Batman’s life was twisted and distorted from what we all know.

This version of Bruce is, in many ways, just as polar from the real Batman as The Batman Who Laughs himself.

Seeing the moment that changed Batman from the hero we know was easily my favorite part of this issue; young Bruce Wayne finding himself in possession of Joe Chill’s gun moments after Chill uses it on The Wayne’s.

This Batman is lethal, using the resources of Wayne Enterprises to kill criminals at will. He is not as far gone or strictly as evil as The Batman Who Laughs, as he seemingly only targeted the evil in Gotham, albeit with lethal measures. But he is far from good. He keeps Alfred in his service by putting a bomb in his neck.

This Batman has no rogues gallery because he murdered them before they could don their colorful costumes and psychotic personas. But, even without a Joker, this Batman still has a yin to his yang (or at least someone who can beat him): Jim Gordon.

Unlike the other Batmen (and Batwoman) from Metal, it seems that the Grim Knight still had a sense of justice — albeit a twisted one — that he tried to impart on his Gotham. We have not learned anything about the character that sheds light on why he teamed up with The Batman Who Laughs, but it seems safe to assume Snyder is slowly weaving another masterful tale.

In certain cases, it feels preemptive to judge single issues of the story, instead of the stories as a whole. I remember feeling the same way reading Endgame, Metal, I am Suicide, I am Bane, etc., but in the end, when taken in totality, these stories were some of my favorite Batman arcs of all time. I have no doubt I will feel the same when The Batman Who Laughs has completed its run.

I think I’m just grouchy that it’s taking so long! This issue is a must read if you love the character. It was certainly a great addition to this unique and intriguing storyline, and I can’t wait to see what happens when we see our Batman fully “Jokerized” next issue! – Mance Fine

GRADE: B+ (Once again on the Scott Snyder Scale)